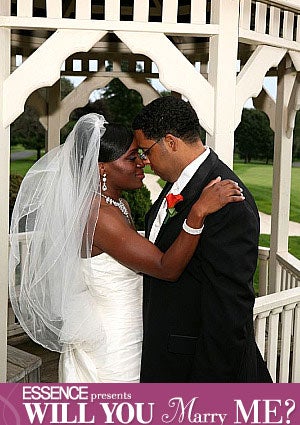 Bride: Tanya Edwards Groom: Frederick Vialet Home State: New Jersey Wedding Date: September 6, 2009 Wedding Location: Kirkpatrick Chapel New Brunswick, NJ and Basking Ridge Country Club, Basking Ridge, NJ Study Buddies: Tanya and Fred met through Tanya’s roommate and friend, Aida, during Tanya’s “Super Senior” year in college. Fred would come by their room to see her friend and they would simply say “Hi” to each other. It wasn’t until after college when Aida had left town that they started seeing each other romantically. They started out studying together for a test and ended up learning so much about each other. “If I start seeing someone, I just see that person,” Tanya explained. “So if I’m talking to you and we start talking more, I’m exclusive and I told that to Fred.” “When she told me that I was like, ‘if this relationship is cool with her then it’s cool with me,'” Fred said. “I never looked at it as we went through stages.”    Picture Perfect Proposal: He Said: “I had taken my godmother to Tavern on the Green near Central Park for brunch before and I promised Tanya that I’d take her there one day. On the night we got engaged I told her I’m going to take her there. So we went to watch a movie. And then we took the train up to Central Park and had dinner. Afterward I had the ring in my pocket and I was trying to figure out what I would do. I made up my mind that I was going to get a picture. So I asked someone to take a picture and I said, ‘I want you to take two pictures–whatever happens take the second picture.’ So we posed and on the second picture I said wait and got down on one knee and with my free hand, I pulled out the box and opened it.” She Said: “The day of the engagement was like any other day. I always bugged Fred and asked him, ‘when are we going to go to Tavern on the Green?’ That night we planned to go to Manhattan and watch a movie and then go to dinner. We watched the movie, then we went over to Tavern on the Green. After we were done eating we walked out and I felt pretty good. Fred says ‘let’s go take pictures around Central Park.’ I said ‘No,’ because it was dark. So he found someone to take a picture out front of the park. I don’t like taking pictures. After the first picture, he says ‘one more picture.’ I’m thinking, ‘ugh, another one?!’ I position myself and then when I looked I saw Fred on the ground with one knee bent and something in his hand. It was a shocker for me. I don’t remember any of the words that he said, but I knew what it meant and I just started crying. He was like, ‘Tanya are going to gonna answer me? Will you marry me?‘ I said ‘Of course.’ I will never forget that day. that’s for sure.” Baby, Baby, Baby: Tanya and Fred talked about starting a family immediately after getting hitched. They got their wish during their 6-day honeymoon in Aruba when Tanya started feeling a little queasy. “My last two days in Aruba, I felt completely nauseous…” Tanya reveals. She returned home and went to the doctor, who confirmed that she was pregnant. “It wasn’t unexpected but it was still a surprise,” she continued. “I’m due in May. It’s going to be a girl. We’ve picked out a name, but we’re not telling until the baby comes.” View Photos from the growing family’s wedding day. Planning your big day? Check out these celebrity weddings for inspiration. Like how Frederick proposed to Tanya. Here are some more proposals that will melt your heart. Check out four couples who have recently been engaged in the pages of ESSENCE. Read their stories and vote for your favorite pair. Not only will the winning couple receive a dream wedding, but you, the voter, may win a stay in Maui, Hawaii.