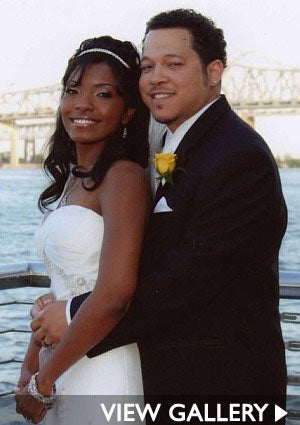 Bride: Brianne Joseph, 32 Groom: Roman Joseph, 35 Occupations: Brianne, Private Investigator; Roman, Tattoo Artist  Hometown: Baton Rouge, LA by-way-of New Orleans, LA Wedding Date:  May 30, 2009 Wedding Location: Hilton Riverside Hotel in Downtown New Orleans Don’t Let Go Roman took Brianne to a Jazz Club in Downtown New Orleans for their first date and as things began to heat up on dance floor, one older patron gave Roman the best advice of his life.   “Everybody in the entire club was having such a good time dancing to second line music with all the brass instruments and everybody with handkerchiefs in their hands were waving them,” Brianne remembers. “Roman was standing behind me with his hand around my stomach. This old guy said to him, ‘hold on to her,’ Roman looked at him and said, “I got her!” …And he never let her go. Ecstatic Roman popped the question to Brianne on New Year’s Day 2009 with a two-karat princess cut diamond ring. Brianne was so excited she didn’t bother to get dressed before racing over to her mom’s house to give her the good news. “I went to bed and when I woke up he had the ring on the pillow there for me. When I saw it, he just kind of peeked into the room. Then he just got on his knee and asked me to marry him. I was so excited. I left him there and I just got in the car and drove in my robe to my mom’s house. I was screaming and showing the ring to my parents.” Splurge Versus Save When it came time to decide what to save on and what to splurge on, Brianne knew she didn’t want to cut cost on her dress or her shoes. “I just felt so pretty in the dress. Usually, I try to keep things reasonably priced, but for my shoes and my dress, I did not care. Everything else I was kind of moderate with. I was not compromising on the dress and the shoes.”  Back Together Again Brianne and Roman had plans to get married sooner, but the disaster caused by Hurricane Katrina put a halt to their plans. Due to the damage done to their homes and the city, their families moved to new parts of the state and country. It was important for the couple to use their wedding as a way to get everyone together again. “After Katrina, we had to shift into survival mode,” Brianne says. “All our families were in New Orleans and then all of a sudden we were all scattered everywhere. For our wedding, we wanted all of our family members who were displaced to have a chance to come together in New Orleans. That was the most amazing feeling. It was like a big family reunion.” Brianne says.  Read More: