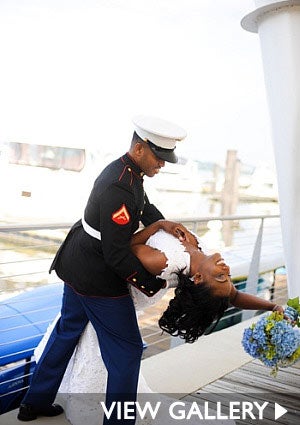 Bride: Ayana James Groom: Duriel Golden Home State: Maryland Wedding Date: July 4, 2009 Wedding Location: Glenview Mansion, Rockville, MD Laws of Attraction: Ayana and Duriel were both Biology majors at the University of Maryland. When they met, they were both dating other people, but their chemistry was undeniable. As time passed, the two ended their previous relationships and decided to experiment with a love of their own. They got together on 4th of July 2005 and concluded that they had all the elements of a combustible romance. “We just said, ‘OK, we’re more than just friends. Let’s stop pretending,” Ayana remembers of that July 4th. 1+1=3 After a few years of dating, Ayana got pregnant with a son. The couple had been talking about their future, but hadn’t made any solid plans. With the new addition coming, they decided to get married in two years. In July 2008, when the couple’s anniversary came around and Duriel hadn’t proposed, Ayana was determined to not get her hopes up. Duriel had kept his word, but wanted to make her sweat. On July 3rd, he took her out for their anniversary and tricked her into thinking he would propose three times. The story is best when Ayana tells it:  “He takes me to one of our favorite restaurants, Acadiana. We have dinner, then Al Green’s “Let’s Stay Together” comes on. I’m like, ‘Oh my gosh! He’s going to propose!’ Then he says, ‘Wanna go see a movie?’ We go see a movie and then we’re just walking around downtown Silver Springs. We sit down on a bench and get really deep and personal. I think, ‘Oh my gosh! He’s going to do it.’ He goes, ‘Are you ready to go?’ We drove to this place far out in Rockville, where you can see the whole city. We get there safely and we walk to the lookout point. We’re holding each other and we’re talking and then he’s like, ‘OK let’s go home.’ It’s really late and I am fuming as I’m walking back to his car. He opens the car door for me to sit down and I sit down on a box. Then he says the lyrics from the Al Green song and proposes. It was perfect. I couldn’t have asked for anything more. It was after midnight, he told me he wanted to wait until it was our actual anniversary to propose. I told him, ‘I was getting so mad at you.'” Cry Baby Ayana and Duriel ended up having two weddings. An intimate gathering with close friends and family on January 4, 2009 and then an all out Caribbean-American party on July 4, 2009. After crying through her first nuptials, Anaya was glad to have a second try at keeping her composure. “At my first wedding, I cried hysterically. It was the worst thing to watch on video. I made the worst crying faces,” she laughs. “And then my husband started crying and so did my friends.” Cari-Clash Ayana and her family are from Trinidad and Tobago and it was important for the bride to have elements of her home incorporated into her wedding. She bought the material for her wedding dress in Port of Spain, Trinidad. Her aunt made traditional T&T-style cakes for the wedding reception and she incorporated a steel drum band into her ceremony. Future Blessings Since the wedding, Ayana and Duriel have been busy making a life together. When we spoke to Ayana last, she told us she was eight months pregnant with the couple’s second child. Read More: