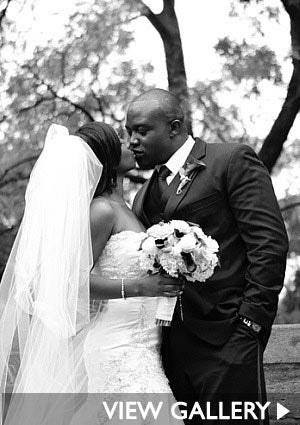 Campus Couple
Audrey and Kelvin met during their freshman year of college at the University of Hartford when they were 19. After their first year, they both decided to transfer to different schools. Audrey moved to Massachusetts and Kelvin moved to New York. Audrey says in a way, the separation made them stronger.

“Actually I don’t think we took our relationship as seriously until we realized we were both leaving. It was a challenge to see if it was strong enough for us to maintain long distance and we decided that we were willing to do it.”

Save the Drama
Audrey’s friends say she and Kelvin have the smoothest relationship they’ve ever seen. Audrey confirms.

“We obviously have our ups and downs as every couple does, but there’s never been a time when we’ve been in and out of our relationship. We’ve never really had any breakups or drama.”

A Family Affair
Kelvin was born in Ghana, where Audrey’s mother is also from. It just so happened that they had family members who knew each other before they met.

“We were already family before we were family,” Audrey says.

Something’s Fishy
Kelvin proposed to Audrey on Valentine’s day weekend of 2007 at their favorite sushi restaurant near her mother’s Connecticut home.

“I think he wanted to put the ring in a dessert, but I ruined it because I didn’t want dessert. He paid the bill and then he said, ‘there’s one more thing.’ I saw him fidgeting in his pocket and he pulled out the ring. I cried. That was awesome–the best moment.”

Party Animals
Audrey’s girlfriends agree that home-girl knows how to party. After their wedding, the newlyweds and their friends hit up a nightclub across the street from Ann Howard @ the Bond Ballroom where the reception was held and boogied all night.

“I went out in my wedding gown. My dress is a mess now. It has holes in it,” Audrey laughs. “There were 15 or 20 of us. We had a VIP area. We ordered bottles of champagne and partied til two or three in the morning.”


Want more wedding bliss? Check out the couples chosen for this year’s Will You Marry Me? contest.


Want to be a part of ESSENCE.com’s Bridal Bliss feature? E-mail us at Relationships@ESSENCE-online.com with a photo from your big day and a little info about you and your new husband.