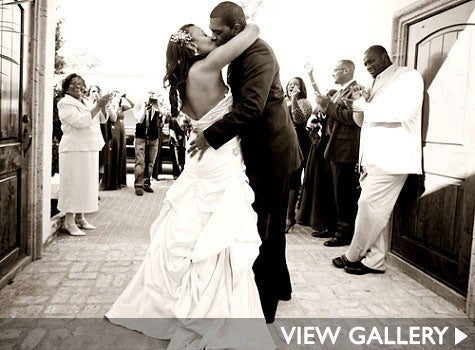 Bride: Erica Davis, 37 Groom: Bobby Rouse, 34 Hometown: Houston, Texas Wedding Location: The Bell Tower on 34th, Houston, Texas Wedding Date: October 2, 1010 Mr. Nice Guy Finds Love “…I’m not perfect, but I am a responsible father to my two daughters, I own a house and a car, and I have a bachelor’s degree,” Bobby wrote in a letter for ESSENCE’s October 2008 issue, expressing a man’s perspective on dating in Atlanta. “But in this town — I call it Little L.A., because everyone’s Hollywood — there’s an abundance of celebrities, professional athletes and entertainment executives with seven and eight-figure salaries. Here, men who are ‘just’ hardworking and well-mannered get no love from Black women…” A whopping 6,000 women responded to Bobby’s letter; some wanted to tell him how wrong he was and others wanted to show him how right they were for him. One reader, Erica, simply hoped to impart some advice. “You may consider dating women 30 and up,” she suggested. “It was just a down-to-earth, honest opinion,” Bobby says now. It took him a few months to reply and when he did he simply said, “Thats mainly what I date, and still they are all the same. What now?” The conversation ended until more than a year later when Erica and Bobby found each other on Facebook. This time, their emails transitioned into five-hour phone calls and finally a face-to-face meeting. By May 2010, Bobby was relocating to Houston to be with his queen. Flip the Switch Before he moved to Houston, Bobby made sure to make friends with Erica’s family. He enlisted her sister in his proposal plans, having the engagement ring sent to her house. On the night of the proposal, Bobby took Erica and her family to Kellen’s, a world renowned steak house in downtown Houston. He decided to shake things up by starting a huge argument with Erica at the dinner table. She was mortified. “Has he ever been like this before,” Erica’s sister asked, egging her on. “He’s a loser!” “I was so upset,” Erica remembers. “I thought, ‘I guess this is what happens when you meet a guy on the internet.'” Just when Erica had reached her boiling point, the waiter walked over to the table with a bottle of champagne and Bobby knelt down with the ring and popped the question. “I thought, ‘Oh thank God, he’s not crazy,'” Erica laughs. “I should have known that something was up.”