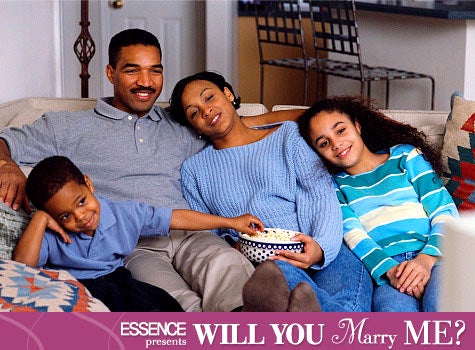 Recently, the National Fatherhood Initiative (NFI) released a survey called “Mama Says: A National Survey of Mothers’ Attitudes on Fathering” in which over 1,500 mothers were asked about what they thought of the father’s of their children. Interestingly, a huge gulf emerged between moms who live with their children’s dads and those who do not. Moms living with their children’s father–90 percent of whom are married–were very satisfied with how dad is doing as a father. In contrast, moms not living with dads were very dissatisfied.

In fact, on the four measures of their satisfaction with their husband’s performance, married Black mothers gave dads the highest marks–higher even than married White mothers.

But there is a great deal of hope in the good news. The institution of marriage seems to be bestowing parenting and relationship benefits more on Black couples than on couples in other communities.

Indeed, Black married men who subscribe to the notion that “loving the kids is loving her” are getting it right. There is little doubt that if married Black moms are so satisfied with their husbands’ parenting, it is likely their marriages are thriving, too.

There is no greater example of this reality than the marriage of President Obama and First Lady Michelle Obama. It appears the First Lady’s love for the President is wrapped up in his love for their children. Last summer, the First Lady had this to say about her husband: “He’s the same man who drove me and our new baby daughter home from the hospital 10 years ago this summer, inching along at a snail’s pace, peering anxiously at us in the rearview mirror, feeling the whole weight of her future in his hands…determined to give her what he never had: the affirming embrace of a father’s love.”

The larger truth here, and the hope of hopes for the future of Black love, is that love indeed begins at home. Love is taught and modeled and Black children whose parents are married see daily examples of how love works. So, when they are ready to start dating and choose a spouse, they will have their parents’ marriage to look back to for guidance on how to communicate and, when needed, how to lovingly resolve conflicts while staying committed to someone for the long haul.

And what’s not to love about that.

Roland C. Warren, president of National Fatherhood Initiative, is a married father of two sons. He can be reached at rwarren@fatherhood.org.