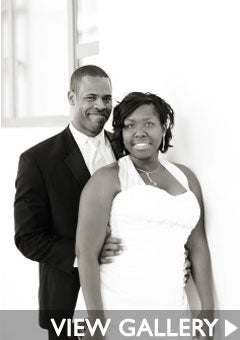 Take a Chance on Love
Astrid had been a member of Match.com for a while when her membership expired. She was debating whether or not to renew, when she received a message from “a cute guy” named Fred. She wouldn’t be able to write him back unless she signed up for the online dating service again. So she did.

“We started chatting,” she remembers. “He asked me why I was on Match and I told him that I signed up again because of you.”

“She was the most honest and open [person] on Match.com,” Fred says. “she didn’t play any games. It was really easy to talk to her and I just wanted to talk to her more.”

Fred was honest too, he told her he was looking to have a serious relationship and settle down.

About a week after they met online, Astrid and Fred had their first date — dinner at T.G.I. Fridays.

“She was a nice, calm and peaceful person,” Fred remembers from their first date. “I’m a police officer so I’m used to seeing the opposite in people.”

Astrid enjoyed their first date, but she decided not to expect much. “I’ve had good dates in the past and then nothing transpired. So I left thinking, ‘That was a good date, I would love to see him again, but if not, oh well.'”

He Loves Me
Astrid did see Fred again, regularly and pretty soon they were spending almost every day together.

“Everything started to move pretty fast,” she says, “but it wasn’t forced, it was pretty organic.”

One afternoon, about a month and a half after they started dating, Astrid and Fred both realized what they found in each other…

“I wanted to tell him I loved him, but I wasn’t sure. I just looked at his face and I’m like, ‘This boy loves me!’ So I just said, ‘I love you’ because I knew he loved me too and he would say it back,” she relays.

“Once she said it, it wasn’t hard,” Fred says. “When I said it, it just rolled off the tongue.”

Moving Forward
Astrid and Fred decided to take a leap of faith and move in together in April 2009, but she knew she didn’t want to live with a man unless marriage was in the future.

“We had a conversation about moving in and I expressed to him that that’s not how I envisioned things for myself,” Astrid says. “I told him, ‘If we’re going to move in together we need to have a conversation about getting engaged and getting married.” I wanted to get engaged within three months of moving in.

When July came, Astrid knew the time was coming for Fred to pop the question. Fred took this as an opportunity to joke with his lady.

“He did things like go down on one knee and then say, ‘Oh I’ve got a cramp!’ Or we’d be at a romantic restaurant and he’d take my hand and look into my eyes and say, ‘Oh my God, this food is so good.’ Plus we lived together so I knew the ring was somewhere in the house.”

Little did she know, Fred was planning to surprise her with a proposal at their favorite mini-golf course in the area.

The day after her birthday, Astrid decided she couldn’t handle the suspense any longer. She looked at Fred and said, “I can’t take this anymore; I’m losing my mind. When are you going to do it?’

Right there at home Fred got down on one knee and said, “You’re a really great girlfriend, but I think you’d be an even better wife… will you marry me?'”

“I said yes,” Astrid remembers. “And we laughed because I couldn’t wait. He told me he was going to propose at the mini-golf course. I think this was way better because I don’t like the whole public thing.”

A year and a half later, Astrid and Fred made their love official in a contemporary celebration in Cancun Mexico. Share their love…