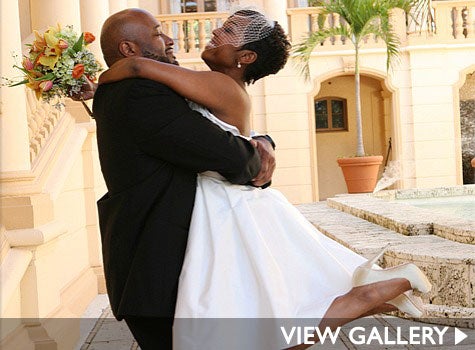 Bride: Asia Solomon, 32 Groom: Kevin Woods, 37 Hometown: Baltimore, Maryland Wedding Location: The Rusty Pelican, Key Biscayne, Florida Wedding Date: March 20, 2010 Meet Me Half Way “If you get a woman to laugh, you’re pretty much in there,” Kevin says. When he first spotted Asia at a party back in 2004, his main objective was to get her to flash her pearly whites. “I was just trying to get her attention and get her to laugh.” He waved at her and beckoned her to walk over to him. She looked at him for a moment and said, “No. If you want to talk to me, you’ve got to come to me.” “Let’s meet halfway,” he said, standing up from where he was sitting. As Asia took her first steps toward her future husband, he sat back down. It worked. Asia laughed out loud and met him right where he was. Through It All Asia’s mother passed away in 2005 and, as she recalls, “Kevin was there every minute.” “He wiped my tears. He wrote my mom’s obituary for me because I couldn’t do it. If he wasn’t there I wouldn’t have gotten through it.” His support let her know that he was the man for her. “I thought, ‘He’s got to be the one who I’m supposed to be with for the rest of my life.” And Then There Were Three In 2006 Asia got pregnant with her first child, Kai. “Of course, I was like, ‘I don’t want to be pregnant. I’m supposed to be married first!'” Asia says, looking back. Although Kevin assured her that he would marry her, she didn’t want to pressure him. “I wanted him to marry me because he wanted to marry me,” she says. They decided to wait for the right time. It’s Our Anniversary The right time came on their five-year anniversary. Like a lot of us, Asia assumed that Kevin wouldn’t remember the date. She put a plan in motion to surprise him with a dinner date and a special card. She made a dinner reservation at Fogo de Chao in Downtown Baltimore and couldn’t wait to say, “Got ya!” Kevin remembered alright, but he let Asia believe that she had masterminded the perfect anniversary date. “At the restaurant, I passed him the card and he said, ‘Oh, baby, this is so nice. I’m so sorry. I forgot.'” Asia played it off like it was no big deal. After dinner, Kevin suggested that they talk a walk along the Baltimore Harbor. Kevin held Asia close to him and said, “You mean the world to me. Thank you for everything.” They continued stroling until they reached the National Aquarium. Suddenly Asia felt a tug on her hand. She looked down and Kevin was on one knee. “I did not forget what today was. You mean the world to me,” He said again. “Will you marry me?” “I was screaming, ‘Oh my God, Yes!’ Asia remembers. Walking back to the car, I looked at the ring. He did a good job.” Asia and Kevin Woods tied the knot in a beautiful destination wedding in Key Biscayne, Florida. Share their love.