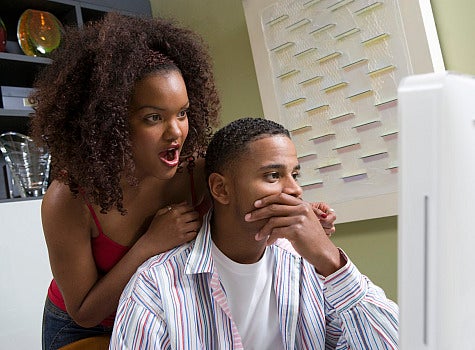 A few of my friends have posted status updates that are a bit TMI, but I didn’t realize how far it could go until I read a recent NYTimes.com story about couples who fight on Facebook. The article documents a couple’s quarrel over birthdays that went from a snide remark to an all-out war. Finally, a friend had to chime in and say, “Hey, you guys know we can still see this right …?” How embarrassing? It doesn’t stop there. The piece also introduced me to a blog called Lamebook that documents lovers’ spats and other crazy comments, photos, etc. found on Facebook. It turns out couples in the digital age really do live their relationships online. They talk about everything, from going to the movies together tonight to plans for sex this weekend. Some people even break up with each other on Facebook. Writing things like, “I’m dumping you,” on their lovers’ walls or taking the passive aggressive route and simply changing their statuses from “in a relationship” to “single.” Of course, Facebook alerts the lovers of their significant others’ changed statuses and Facebook brawls break out, for everyone to see. What’s more, it seems like these couples intentionally argue on Facebook. The boyfriend in the couple profiled in the NYTimes.com article said using Facebook is, “a way to get your side of the story out there to everybody. That way they don’t just hear her side.” Moreover, the internet allows us to say exactly what we feel without the intimidation of being face to face with someone–it’s like hiding behind a curtain and being on stage all at the same time. Studies have found that people will say things more directly and boldly via e-mail, IM and social networking sites than they would when speaking in front of someone. Our Facebook personalities are often bigger or more extreme versions of our real personalities. Using Facebook as a way to argue or communicate dissatisfaction with one’s partner frightens me a little bit. Why fight in the virtual streets of Facebook when you can do it in the privacy of your own home or at least on the phone? Why are we using our online personalities with the people that should know who we really are? When you’re using Facebook to dump your boyfriend–who I presume you see and talk to often–I’d venture to say you’re probably more comfortable living in the digital real than you are in the real world. This subject leads me to ask, “Is this the new virtual reality or is it virtual insanity?”  Read More: