Rhonda Joy McLean-Craig, 65, is a woman accustomed to defying the odds. “I integrated my high school when I was 13, accompanied by a sheriff carrying a gun. I finished high school at 16 and college at 19. I have two advanced degrees and have been blessed with a 40-year career,” she states. However, despite her growing up in the church—her parents were co-ministers of music for more than 50 years in their North Carolina congregation—marriage didn’t rank high on her list of life goals. “I was determined to save the world and didn’t do much dating until my twenties. I dated and agreed to marry a man from Kenya,” she says. “My mother was terrified he would take me away, and for that and other reasons we ended up breaking up.”

A failed engagement couldn’t slow down the trailblazer. Rhonda enrolled in Yale University and, after earning her juris doctorate, moved to New York City to become the first Black female attorney at a private firm. Once again she was integrating a new space and weathering the storm that came with it. She worked her way up to deputy general counsel of Time Inc., the parent company of ESSENCE. 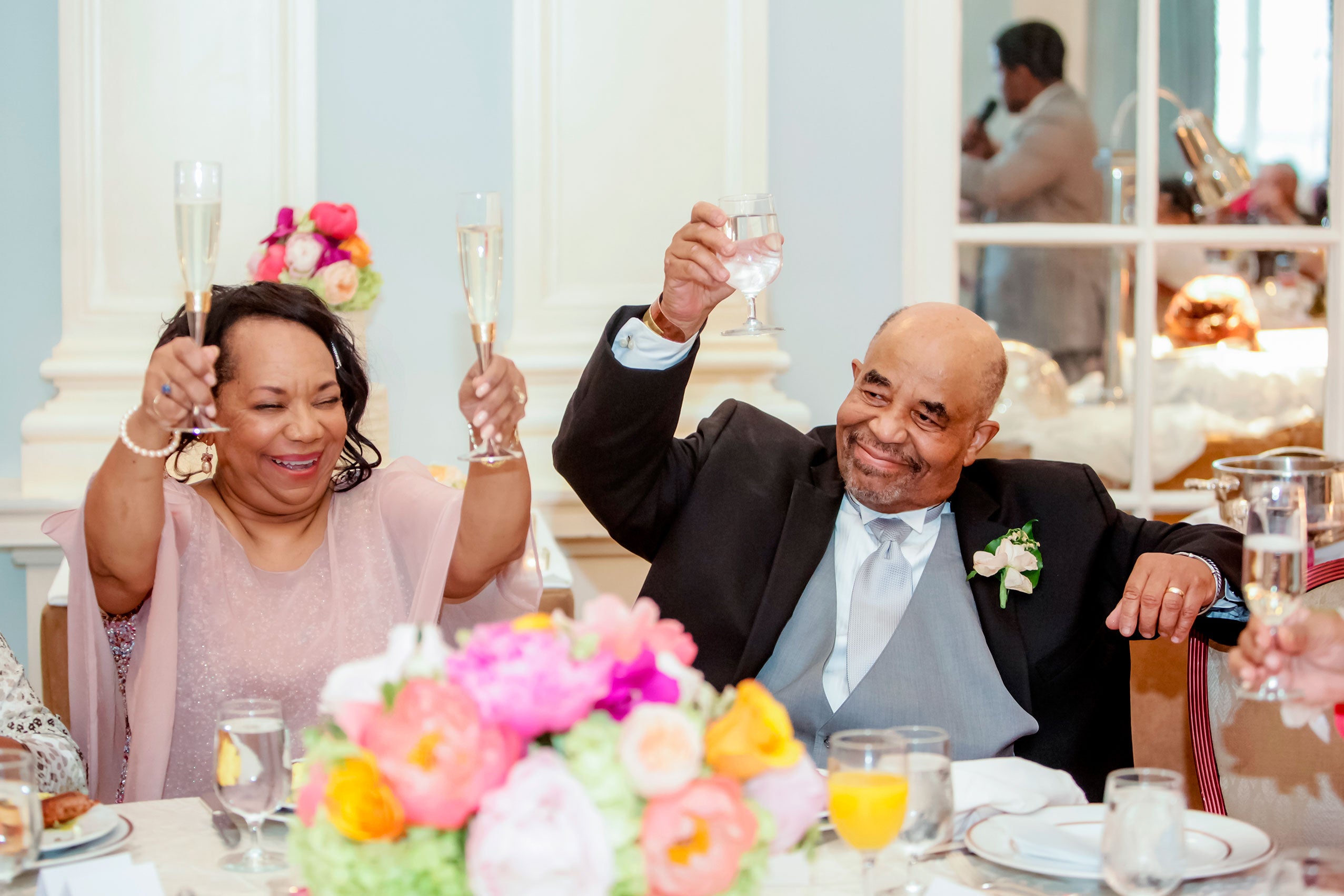 While Rhonda climbed the corporate ladder, her future husband, William “Bill” Craig, 71, was experiencing highs and lows of his own as he healed from two marriages that ended in divorce—the first in his twenties and one in his forties. “I am absolutely a romantic. Even though they didn’t work out, both unions gave the gift of children,” says the proud father of two.

When Rhonda and Bill finally met, the pieces fell into place. “When I first saw him, I was 44 years old. I was visiting his church. I assumed that he was married, so I didn’t ask his name. It took a couple of years before a mutual friend realized we were interested in each other. She introduced us in the fall of 1999 and away we went.”

Although Rhonda initially struggled with Bill’s firm antimarriage stance, over time she focused on the blessing of meeting a man who was devoted and who encouraged her to continue to lead a fulfilled life. “I enjoyed that she was her own person. I was attracted to her freeness,” says Bill. Then about ten years ago, something shifted and the retired nutritionist started asking Rhonda to move into his Brooklyn home. Much to his chagrin, she refused. ‘I was like, “I have my own place. I’m in Manhattan. I’m happy to see you on the weekend.’ I was a busy lady,” she says with a laugh. It took five years for her to accept. “He had become my center. I wanted to come home to that every night.” 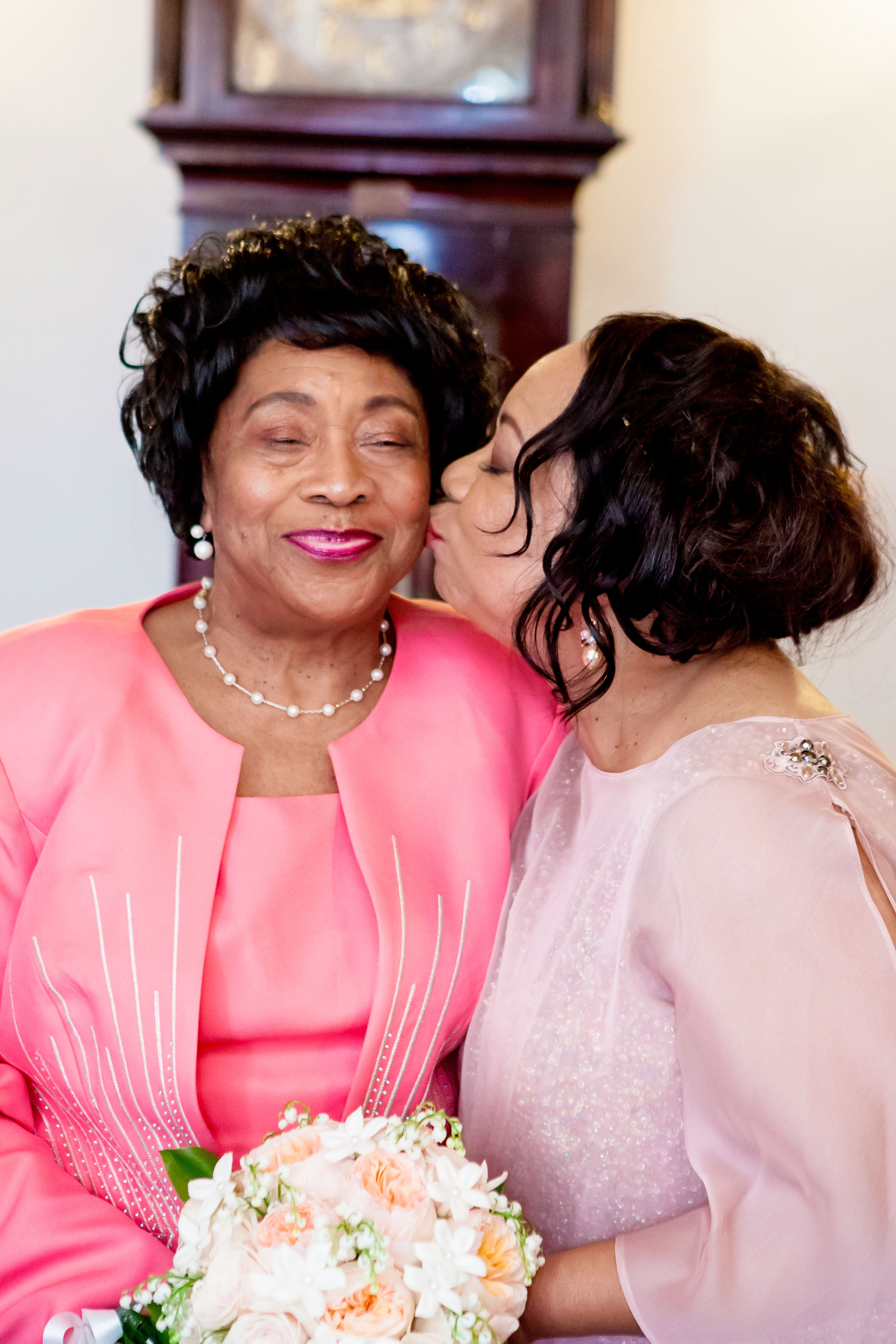 Bill also came to see matrimony was worth another try. “I realized some time ago that I wanted to make us “official” and proposed several times,” he says. Rhonda would agree but they never made plans—until one starry night last spring. “It was a quiet conversation after dinner, sitting out on the deck that he had built at his Brooklyn house. That time, the question felt different and so did my answer.” A month later the two exchanged vows at The Yale Club of New York City as Rhonda’s 91-year-old mother, who was the matron of honor, looked on. The couple kept the guest list to 80, inviting friends they’d known for at least 20 years. “He surprised me with a poem he wrote in the 1980’s. There wasn’t a dry eye in the place. Since then he calls me “wifey.” ” Bill has settled into his new marriage and proudly wears his wedding ring: “I make sure to show off our connection.” 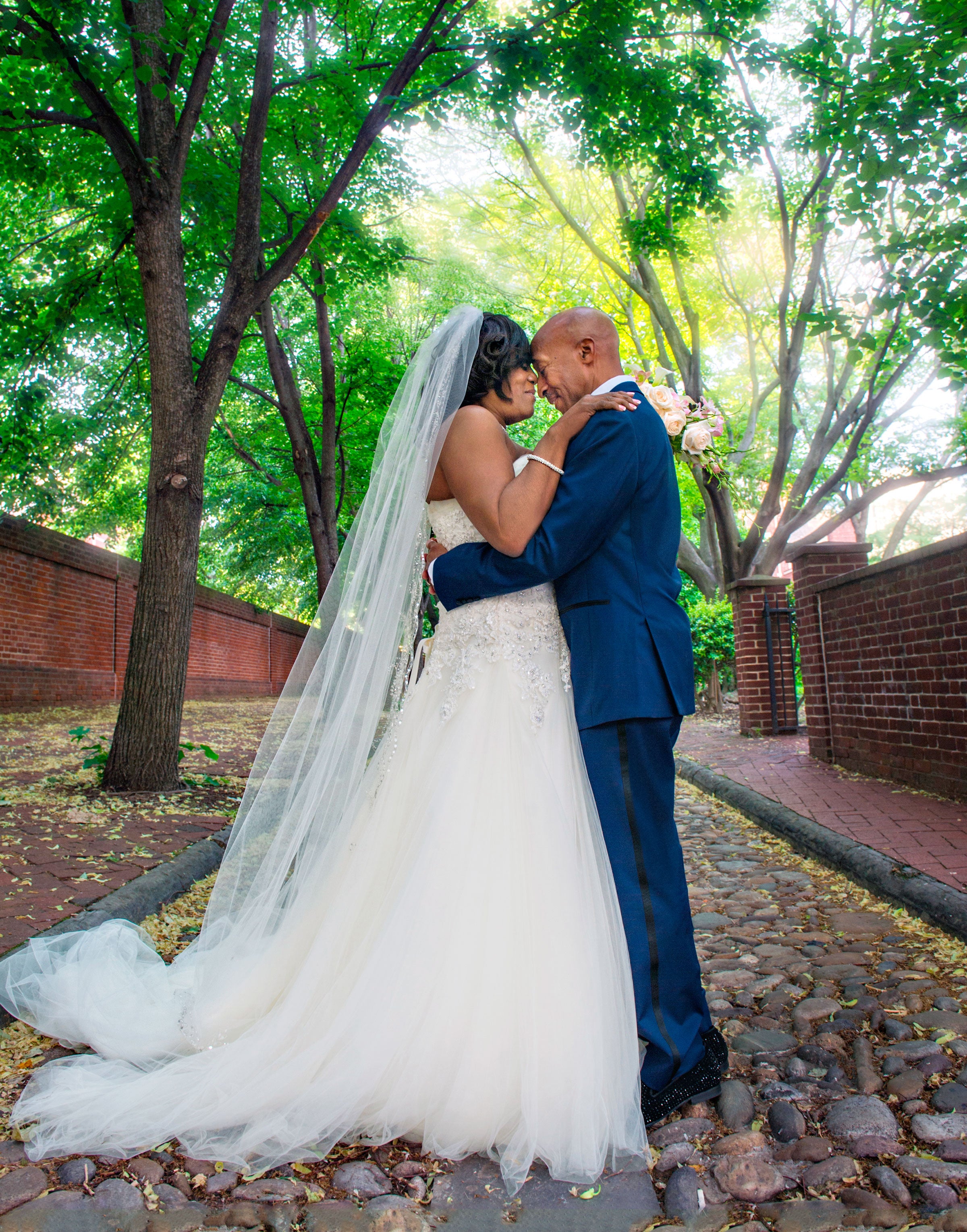 As her fiftieth birthday approached, New Jersey publicist Mona Terrell prepared to enjoy the fruits of her successful life as the single mother of two daughters. But the universe works in mysterious ways, and six months before celebrating the big 5-0, Mona found herself seated next to a mysterious new guy at a work event.

“We met at a leadership conference. I’m a research scientist and normally don’t attend. I happened to go because it was in my area,” admits Nate Wallace, 65, then a divorced father of three in Pennsylvania. “When I met Nate, I’d kissed enough frogs. In our convo we both were trying not to brag about our kids,” says Mona, 62, laughing. “Turns out that one of his sons attended the same college as my daughter. We realized we had a lot in common.” Having daughters to talk about was a dream come true in itself, as a teenage Mona had been told by a doctor that bearing children would be difficult. She welcomed her two girls, by an older partner, when she was in her thirties. 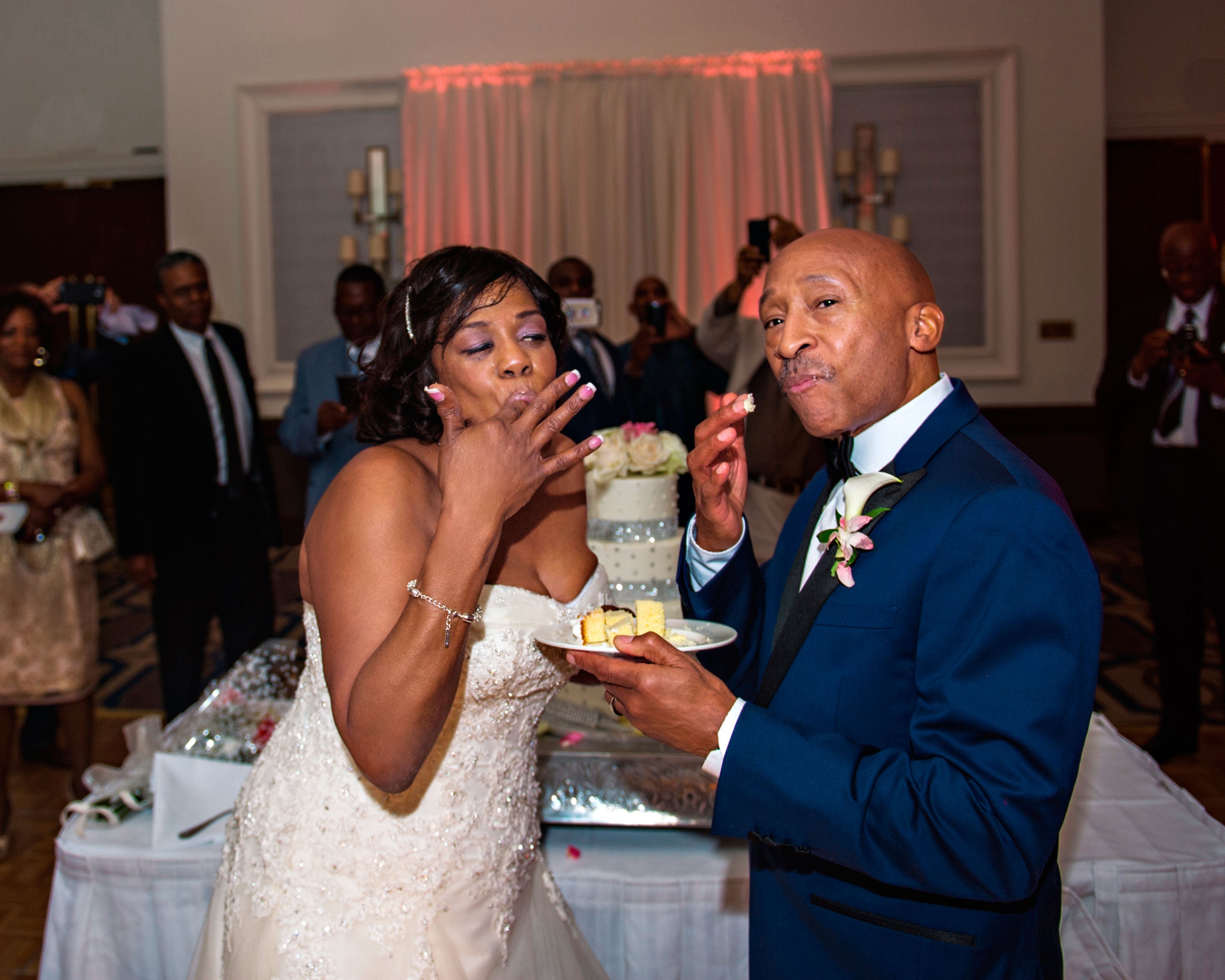 Despite an 80-mile distance separating Mona and Nate, their friendship quickly blossomed. “It was nice to meet someone who understood the things that I was going through, especially with the kids. Mona was even giving me dating advice,” says Nate. As things progressed, Mona found herself eagerly anticipating their conversations, and sharing her troubles. “At the time I was having a health challenge. No one knew, but I decided to tell him.” After months of talking, e-mailing and texting, the friends finally reconnected in person for dinner at Mona’s favorite restaurant in New Jersey. “I was attracted to his spirit, strength, and smile,” says Mona. “After that date, I said, “Sorry, I can’t help you with your other relationship anymore because I really like you.” ” Nate accepted Mona’s resignation as his wingman and, eight months later, asked her to be in a committed relationship. “That was the defining difference. He asked to be with me versus letting it just morph.” Even though the two maintained separate homes, any time spent together was filled with love and fun. “Nate would greet me with a big smile, a hug and a glass of wine when I drove to Pennsylvania,” she continues. “He sang love songs to me and served candlelit breakfast.” 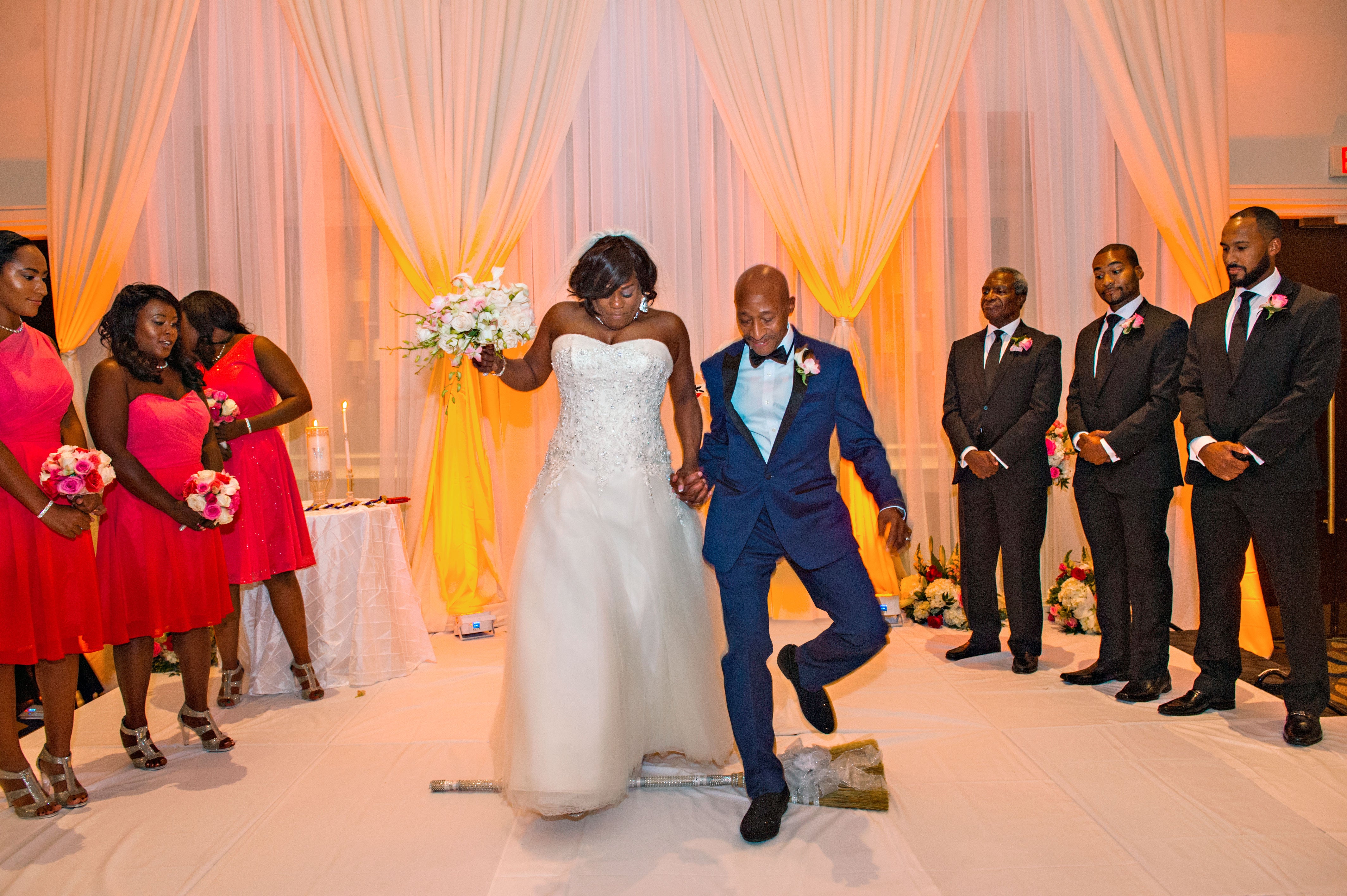 Though full of romance, Nate wasn’t sold on getting hitched again. “I was married once and it didn’t work,” he says. “My thing was, we’re committed—let’s just continue the way things are.” But after 12 years, Nate had a change of heart. “I started thinking, Mona always wanted to be married. I knew this was a woman I could grow with.” An impromptu trip to the mall became a milestone, Mona recalls. “As we passed the jewelry store, he said, “Let’s look at rings.” I thought, Yeah, right, and sat while he looked. He found one and asked me to put it on. We left and continued shopping. Later he said he wanted to return to the jewelry store. He proposed to me right there. He’d had the ring sized while we had been shopping. I almost fell out.” 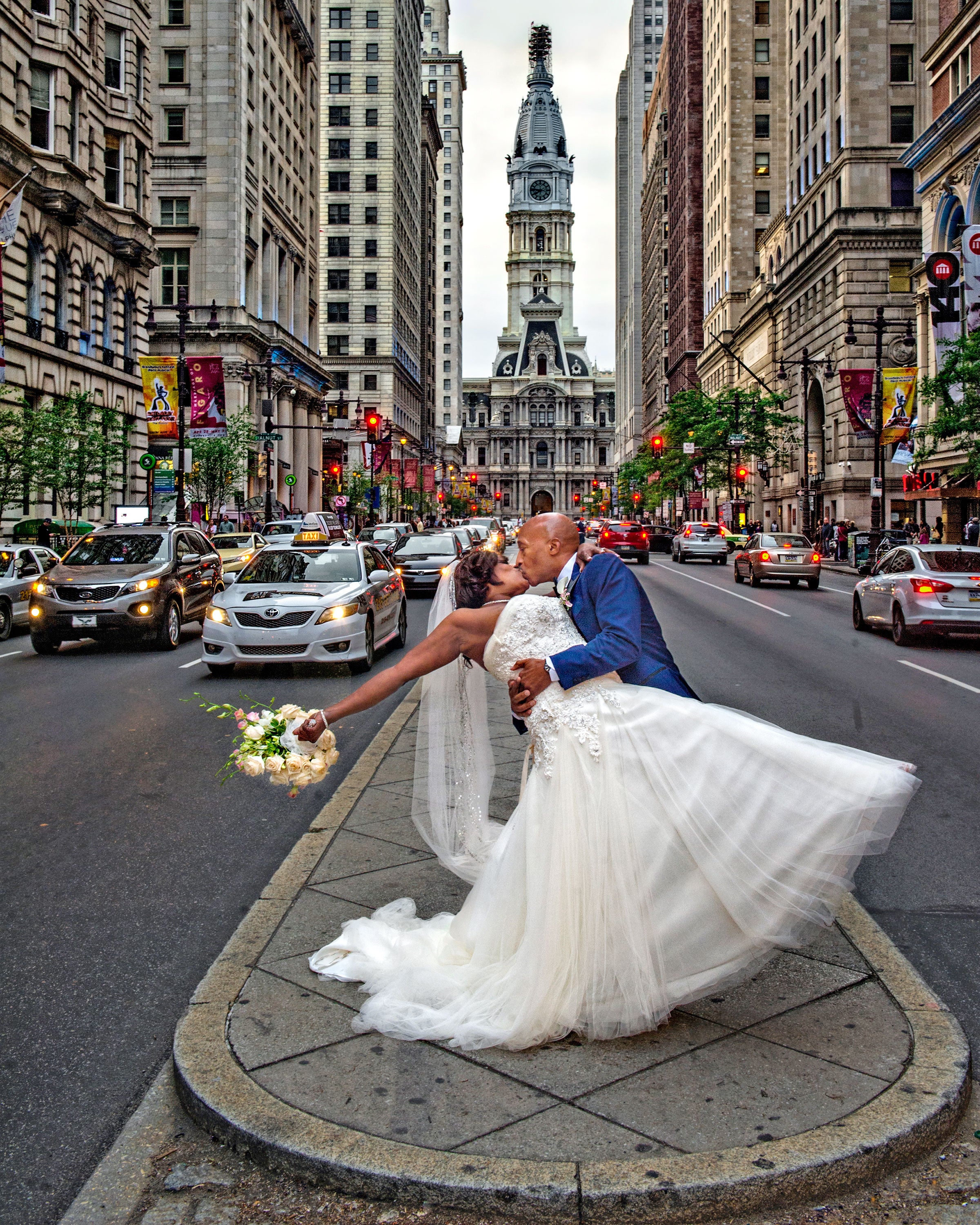 Eleven months later Mona’s 93-year-old mother, Zoma, walked her down the aisle on May 20, 2017. “From the first date, I wanted this man to be a part of my life,” Mona says. “My grandmother used to tell me, ‘The heart is like a magnet. You get what you call for.'”