For months Aisha would see B. Cole at parties. One May night, B. Cole asked for a dance and Aisha made it memorable. Their first date in June lasted 72 hours. “It was the combination of all of who she was,” says B. Cole. “From that first date, I didn’t leave her side, and then in February I asked her to marry me.”

Over the years B. Cole and Aisha watched the Black epicenters they lived in “wither and die on the vine in the face of gentrification.” Says B. Cole, “They all became these homogeneous spaces. We found ourselves being in a state of rage all the time not only [about] how people were gentrifying neighborhoods but also [about] the fact that they had no regard for anything that had come before them.”

The couple, who’ve been together for 14 years, decided to do something with that anger: They opened Dovecote Café in Baltimore and launched Brioxy, a national network for people of color in the areas of health, education and employment. “There is a part of love that is about always going home,” says B. Cole. “You always come back to each other. In order for love to be sustained, you also have to be inspired to come back.”

Working as business partners gives them a chance to be in awe of the person they married. “We got together young, and what you need at 25 is different from what you need at 35 and at 55,” says Aisha. “So we evolve together and create a relationship that is not finite, that kind of moves too.”

That flexibility has been the key to sustaining their marriage. (They’ve also tried living apart.) But they will not budge on their commitment to staying together. “When leaving is off the table,” says Aisha, “then you’re on the same side of figuring out what the solution is.” 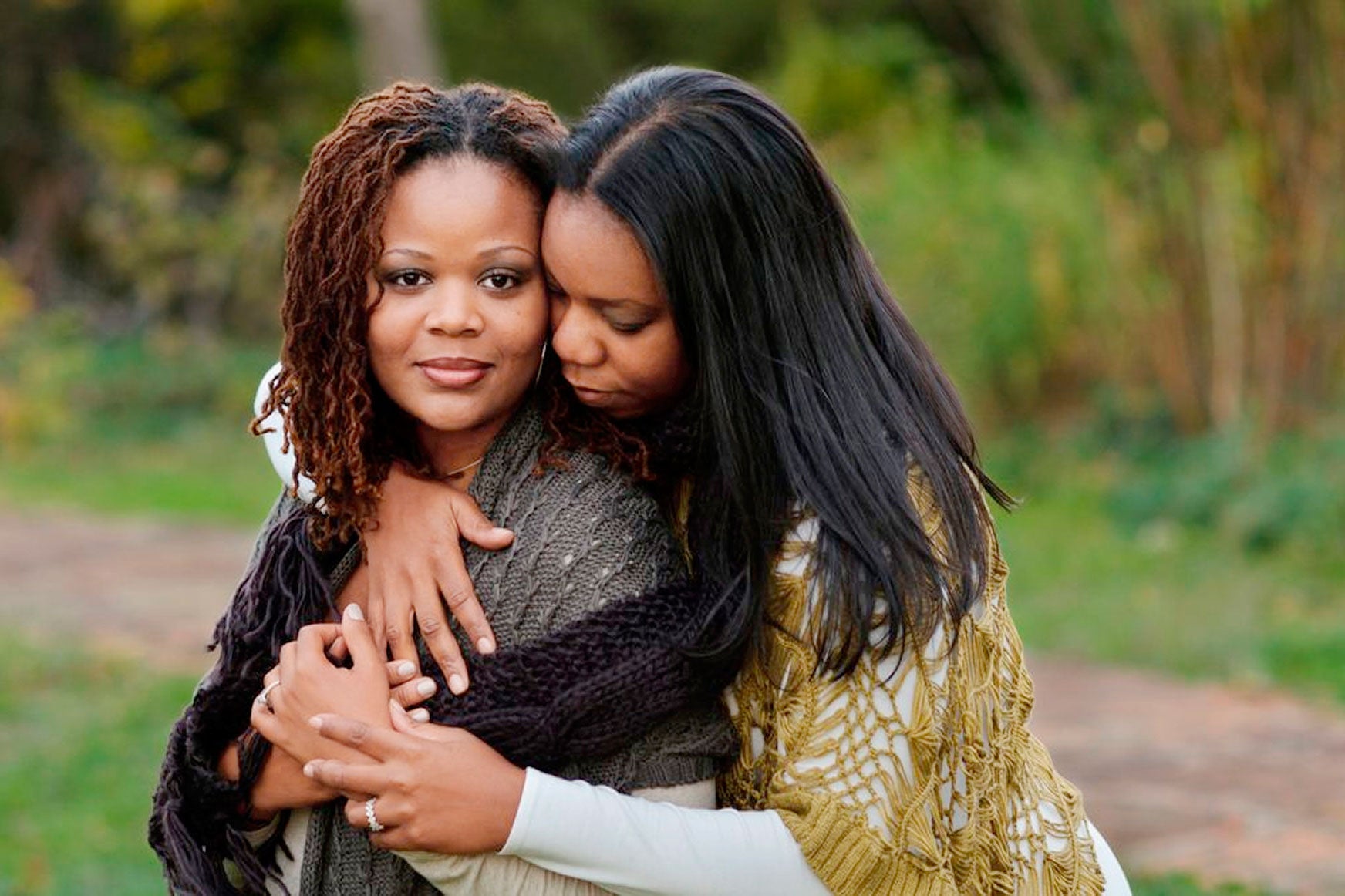 To alleviate homesickness while living in Spain, Micaela connected online with JaChel. They eventually met in person when Micaela returned to the U.S. but weren’t instant friends. Their relationship grew slowly over the years.

“The world just started to revolve around her,” says Micaela. They have now been together for ten years and married for five. Three years ago the Dallas couple welcomed a baby boy to their family, which includes JaChel’s teenage daughter from a previous marriage.

“He doesn’t look anything like me,” says Micaela, their son’s biological mother, laughing. “He looks like our daughter and JaChel—they’re three peas in a pod. He calls her ‘Mommy’ and me ‘Mama.’ ”

The moms used a sperm donor who was willing to be revealed when their son turns 18. Initially, they wanted a donor they knew, but instead they used a sperm bank to minimize the legal risks of a known donor claiming paternity.

From coparenting with JaChel’s ex-husband to navigating roles, they say finding their rhythm has been critical. There isn’t a traditional expectation of duties, like who takes out the trash. “You can’t assume who does what by looking at us,” says JaChel. “It’s a bonus, because we don’t feel as if we are obligated to conform to a particular role. We bring to our relationship the skills that we do best.”

And while both JaChel and Micaela dated women and men in the past, neither subscribes to labels. JaChel describes herself as a “lover of people” and for her wife, gender is a nonissue. “I married JaChel because she’s the one for me,” says Micaela. “She literally is the other half of me. She was put here for me in some way. If she were a man, I’d still be married to her.” 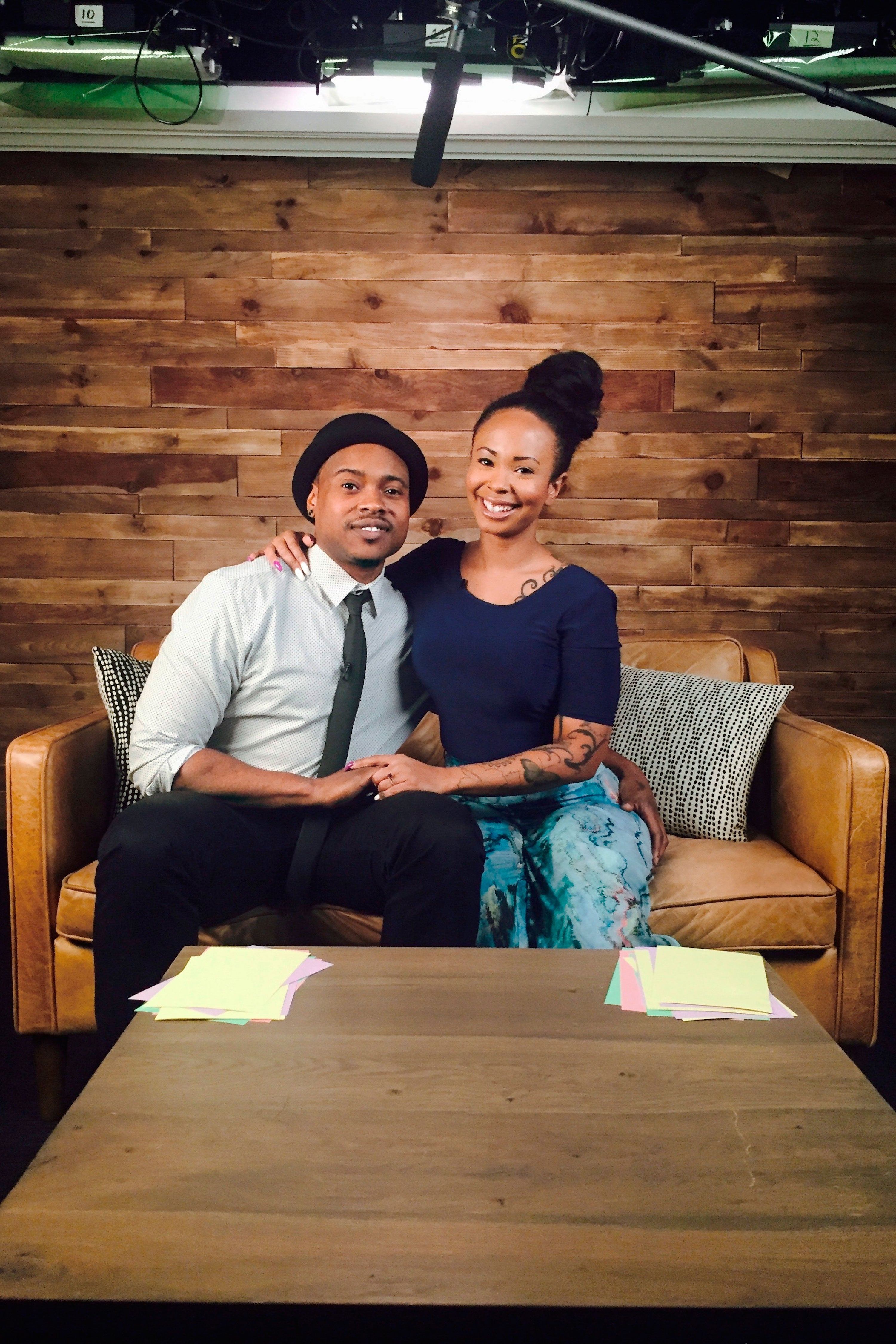 “Tiq slid in my DMs,” says Kim, laughing. Already in a relationship, she ignored his advances for months. After becoming single, it still took some encouragement from a mutual friend, as Kim wasn’t sure if Tiq was queer. “Queerness has always felt like home because it is a really fluid place,” she says. “It isn’t about one specific orientation but about community, culture and courage to explore and find love where it lives.”

Queer identity was equally important to Tiq, especially after dating a woman who identified as a lesbian. The relationship ended when she could not reconcile her sexual orientation with Tiq’s identity as a transgender man.

“It was important that I found a woman who was really grounded in her
queerness,” he says. “I wanted someone who loves
and understands me as a trans man, and what my body and masculinity are.”

Things progressed quickly. Tiq fell in love with Kim’s brilliance and femininity. Kim was drawn to how hard Tiq loves, after watching him care for his dying mother. He proposed on Valentine’s Day and they wed in May.

At last year’s TEDWomen, they presented the TED Talk “A queer vision of love and marriage,” which has more than 1 million views. In it the couple open up on accepting each other completely and creating their own safe space. “She loved me for exactly how I showed up,” Tiq says of his wife during the talk. “She would trace the numb keloid scars left by my top surgery. She said these were reminders of my strength and nothing for me to be ashamed of.”

Yes, they are a gorgeous couple. Tiq and Kim, who are role models to more than 20,000 followers on Instagram, understand the importance of their story. “The culture around queerness, femininity and transness is of lovelessness, particularly for Black folks,” says Tiq. “We try to stand in the middle of that.”

However, they don’t pretend to be perfect. Right now they are choosing to live in different cities while Kim cares for her ailing mother in Toronto and continues to heal from a painful miscarriage that happened two years ago. She’s also exploring Canada’s health care options as they prepare to expand their family. Tiq remains in Brooklyn. “Our queerness doesn’t project a specific blueprint of what things are supposed to look like,” says Kim. “We have the ability to create what we want and don’t have to feel bound by ideas of tradition.”

Once again they are defying the relationship laws of time and space, and defining love on their terms.

This feature originally appeared in the August 2017 Issue of ESSENCE Magazine.