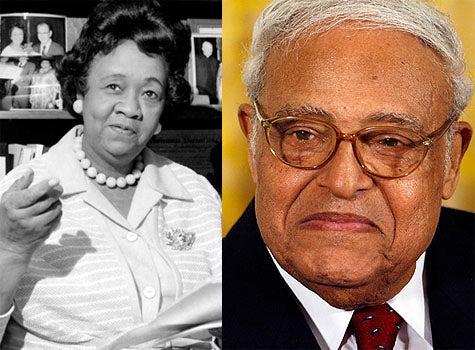 Phill Wilson is the President and CEO of the Black AIDS Institute. Here, he states his vision of how we as a community can lessen the danger of AIDS for Black men and women. Last month we experienced the passing of two lions of the Civil Rights Movement: Dr. Dorothy I. Height, who for 4 decades headed the National Council of Negro Women (NCNW), and Rev. Benjamin L. Hooks, who led the NAACP for 16 years. Their deaths represent a tremendous loss — not just for Black America, but for the world. Their lives remind us that leadership matters. Both Dr. Height, who was born in 1912, and Rev. Hooks, born in 1925, faced formidable challenges in life. After winning a scholarship to attend New York City’s prestigious Barnard College, Dr. Height arrived to the harsh news that she would not be admitted; the college had already met its annual quota of two Negro women. The young Ms. Height could have allowed this setback to derail her dreams. Instead, she found the leader within herself. She managed to do something almost unimaginable in segregated America: win acceptance at a second college, New York University, where she earned both a bachelor’s and master’s degrees. Later, she earned 36 honorary doctorates and both of our nation’s highest civilian honors: the Presidential Medal of Freedom and the Congressional Gold Medal. Dr. Hooks served in the U.S. Army during World War II. While putting his life on the line for his country, he experienced discrimination, which he could have allowed to turn him against his country. Instead, he returned home to fight for racial justice as a lawyer and Baptist minister, lead lunch-counter protests, pastor churches in Memphis and Detroit, help direct the Southern Christian Leadership Conference and become executive director of the NAACP. In 2007, he received the Presidential Medal of Freedom. Action is greater than apathy. Strong and visionary leaders like Dr. Height and Rev. Hooks are important to a community, particularly during uncertain times. But leadership can be found in different places: we can look outside ourselves to others to lead and or we can look within. In the fight against HIV/AIDS, we should hold public servants and traditional leaders accountable, but we must also take responsibility, ourselves, for leading. Action is greater than apathy. When we tell our friends and coworkers it’s not okay to make stigmatizing statements about people with HIV/AIDS, homophobic statements about gay men, or misogynous statements about women, we demonstrate personal leadership. We can also lead by asking questions like, “What can I do each day to make a difference on the issue of HIV/AIDS?” The answer comes in different forms: volunteering at an AIDS organization, demanding more of your health department, writing a letter to your legislator, or organizing for an HIV-testing event at church. But probably the most important and often difficult form of leadership is personal. When our partner doesn’t think it’s important to use a condom, insist on it. Knowing our HIV status and that of our partner also requires personal leadership. For those of us who are already HIV-positive, seeking appropriate care and treatment, and disclosing our HIV status to our sexual partners, is leadership. Dr. Height and Rev. Hooks exhibited leadership on both levels. They demonstrated public leadership through their roles in national institutions and personal leadership in how they lived their lives. In one of my conversations with Dr. Height, she reminded me that the National Council of Negro Women was an early partner in the fight against HIV/AIDS. Fortunately, Black Americans can draw upon a long legacy of people like Dr. Height and Rev. Hooks. We are the ones we’ve been waiting for. Because action is greater than apathy, and Black people are greater than AIDS.
Loading the player...

Former President Obama Issues Scathing Remarks At GOP In The...