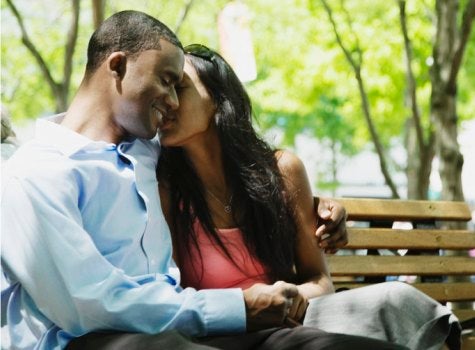 Ever wondered what it would be like to have sex on the beach — not the drink — but you were deterred by the thought of being caught in the act? Or did you throw caution to the wind and venture into the great outdoors for one of your sexual escapades? We gathered confessions from a few adventurous ESSENCE.com readers who dished about their public displays of affection on the road, in the park, on the beach and even up on the roof!   Anika, In the Beginning My idea of PDA is holding hands and maybe the occasional kiss. My new boyfriend is much more touchy-feely than I am. It took me a while to come around, but now I really like it when he slides his hand into my back pocket and gives my butt a nice squeeze. A few weekends ago, we were walking back to the car after dinner and I initiated a little PDA of my own. I found a dark corner and pulled him close to me and we had a little make-out session. It definitely got us in the mood for later. Shelley, Childhood Dreams I had always wanted to hook up in the neighborhood park where I grew up. One night after hanging out at my mom’s house, I took this guy I was dating for a walk to the park. I was wearing a wrap dress and I lay down in grass under a cluster of trees and opened the front of my dress. The threat of discovery was so exciting. Everything was going well until the mosquitoes started attacking. Elise, Drive By I went down on my husband in a truck in a parking lot once. The car was facing the road. Just as I lifted my head these people were walking by and happened to look at the car. They saw me sit up and all started to cheer and clap. I had to laugh. Not sure if I’ll being doing that again. Or maybe I will. Jeannette, Ocean Club When I was in college, I invited my boyfriend down to Florida to spend Thanksgiving with me and my family. After dinner at my aunt’s house, we snuck away to a nearby beach. I was determined to have “sex on the beach.” I spread a blanket down in the sand and we started making out like crazy. The stars in the sky and the sound of the waves rolling onto the shore helped us get into the mood. Things started heating up, he lay on his back and I got on top of him. Just then, six high school kids walked onto the beach and sat really close to where we were getting it on. The extra “company” freaked me out and I had to stop. On the drive home we made a promise to each other to finish what we started. Karen, Up On the Roof One night last summer, my ex-boyfriend and I decided to watch a movie and sleep on the roof of his apartment building in Brooklyn. We had just broken up at the time and were trying to be “friends” — obviously, we weren’t trying too hard. We brought a blanket and pillows up to his roof, ordered a movie on his laptop and had the best breakup sex ever. We got lost in each other with the New York City skyline in the background and the sound of the subway going by. Tameka, The Park After Dark I’m now happily married with three kids. But I remember when I was 22, I dated this much older guy. He taught me everything. One summer night, as it was raining, we crept into nearby park. There was a picnic table underneath a bunch of trees. He sat down and I sat on top of him. It was incredible. The rain was pouring and I felt so alive. It felt like the hot love scene from a romantic movie. I still think of that time.