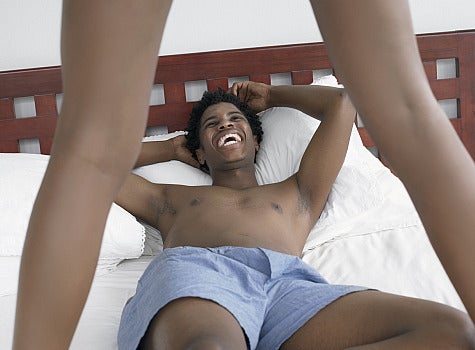 I have a close, straight guy friend who always gives me dating and sex advice from a male point of view — by the way, every girl needs one. A few months ago, we were chatting about pubic hair when he said, “You should get vajazzled.” “What?” I asked, a little surprised and disturbed that he had heard of the new pubic area bedazzling trend before I had. “Um, what is that?” Clearly, I was way late on the vajazzling movement, learning that salons like New York’s Completely Bare have been frosting fronts for years. My friend informed me that adorning downstairs with Swarovski crystals was all the rage, and that he’d totally be into if a cute girl he was dating took the time to add some bling to her nether regions. Our conversation got me thinking about different ways to decorate downstairs and what men think about it. I’ve asked a few good men what they think about vajazzling, permanent tattoos, pubic hair dye and stencil designs. Vajazzle: While salons have been doing it for a while now, vajazzling became more popular a few months ago when a few celebs admitted to adding crystals to their freshly waxed pubic areas. In New York, salon-goers can tack on a vajazzle to their bikini wax at Completely Bare. Not in the 212 area? Order a crystal “tattoo” for $25 from completelybare.com, and do try this at home. What he said: Charles, 26: “I wouldn’t shun her, but I’d wonder how that’s going to affect the overall situation. I’d be more concerned about health. When it comes down to getting down, will it affect that?” Devin, 31: “I just think it’s a spectacle. No one else gets to see it but me. It’s cute and it’s something pretty. It’s like a fun secret.” Adrian, 29: “Most definitely. I think if a woman has her man’s initials down there, that most men would be ecstatic about that. Like a heart is cool, but an initial that’s more personal, I would go over the top for it.” Permanent Tattoos: If you can handle pain of a needle, you could head to a tattoo parlor to get inked. Make sure you really love the design before you go through with it, because you’ll be looking at this design for a long time. What he said: Charles, 26: “At this point, tattoos are overdone. For me, it won’t even register on my radar. That wouldn’t do anything for me.” Devin, 31: “It would have to be something very small, cute and discreet. It would probably be something cool to look at. If she was into it, I would like it.” Adrian, 29: “Nobody in their right mind would put a bumper sticker on a Bentley. You’re priceless, so don’t mark yourself like that.” Pubic Hair Dye While searching for different ways to decorate our va-jay-jays, we stumbled upon Beautybetty’s pubic hair dye. Aside from traditional colors like Black, auburn and blonde, Beattybetty also has hot pink, lavender and Malibu blue hair dye — beautybetty.com. What he said: Charles, 26: “That might be an issue. Is the dye going to stay on her? I can’t really say it would turn me on.” Devin, 31: “I don’t think I would like that. That would be silly and weird.” Adrian, 29: “I don’t think that would really turn me on. It just looks unnatural to me.” Shape-up: Tired of the boring old landing strip you normally get with your wax? Beautybetty also has Charm-cils — stencils that allow you to shape your pubes into a heart, star, lightening bolt, dollar sign and more — beautybetty.com. What he said: Charles, 26: “That takes a lot of effort. Props to her for going through that. I could see myself liking that. I can dig it.” Devin, 31: “I think it would be hot if she stenciled my name down there or a special note like ‘I want you.’ I would love that.” Adrian, 29: “That’s cool, it’s fun and kinky. You’re working with your natural hair and you’re doing something creative. I’d most definitely prefer my name instead of a lightening bolt — unless I’m Usain Bolt or something. It’s all depends on what it represents. It just has to be something that’s personal for me.”