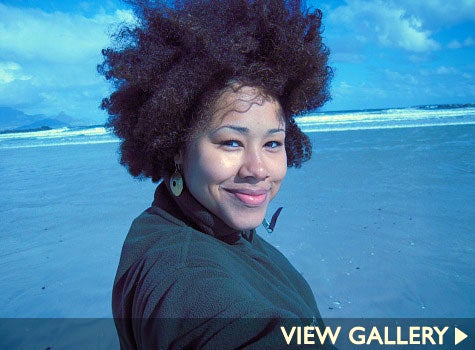 Looking to broaden her horizons, Harlem native, Danya Steele, studied abroad in South Africa for six months during her sophomore year in college. Upon touching the ground, the 25-year-old writer and social activist says she immediately fell in love. “I just remember feeling overwhelmed (in a good way) by how much natural beauty there was compared to where I came from.” Steele has since returned briefly to South Africa to work on a book project highlighting the positive aspects of Africa at large. On the eve of her third trip down, Steele spoke to ESSENCE.com about why she loves South Africa and shared some of her favorite must-see places for anyone considering the journey. ESSENCE.com: What were your first impressions of South Africa? STEELE: I remember on my way to South Africa I was very surprised that there were no people of color on the plane ride, so even the journey over there was interesting. I can’t quite remember my first thoughts but I know my ultimate impression was I ended up falling in love with the country and I knew I always wanted to go back.  ESSENCE.com: You loved it so much you decided to go back again, and again. STEELE: I left having made a lot of friends and those relationships were nurtured and grew into the closest ones I have. All the time that I was away from there, South Africa was still very much in my heart. I went back because I had gotten this idea somewhere along the way to do a book project putting my friends on the map and creating a more positive view of South Africa and Africa in general. ESSENCE.com: What would you recommend a person see and do in South Africa? STEELE: I think if you don’t see Cape Town then you’ve missed out because it’s amazingly beautiful. In fact, I plan to get a home there at some point. You can go whale watching, you can visit Robben Island where Nelson Mandela was imprisoned. There’s Table Mountain, which is a World Heritage site, or you can kick back and go to the different beaches. Johannesburg is where Nelson Mandela’s old home is, as is Winnie Mandela’s. So, I say take in the natural beauty of Cape Town and also the political history in Johannesburg. You can even go out dancing if that’s your scene. Cape Town has great nightlife, and yes, there are clubs in Africa. ESSENCE.com: How was the food? STEELE: It was hard for me to find authentically South African food because everything was so Westernized. It was weird, especially coming from New York, because I found all the things that we have here, there. So you’ll get burgers and pizza and things like that. You’ll also find traditional food but you have look a little harder.   ESSENCE.com: When do you think is the best time to go? STEELE: I think all year around is the perfect time but if you have to choose then I’d say Winter here is good because the seasons are the opposite. ESSENCE.com: You’re in the middle of writing a book about South Africa. What do you want people to know? STEELE: I want people to have a more nuanced and critical view of Africa at large. South Africa is Africa’s number one economy so it’s a great place to start when we want to talk about some good news coming out of the continent. I want people to know some of what I know about South Africa, which is its natural beauty and its people. It’s an incredibly impressive country. Check out some pictures of Danya’s trip to South Africa.