Skip to content
By Lisa Bonner · Updated October 23, 2020
On July 17, South Africa and the Mandela Foundation kicked off a six-month nationwide celebration of Nelson Mandela’s 100th birthday with a series of events honoring Madiba and his legacy. The commemorations began with President Obama’s keynoting the Mandela Lecture a day before Madiba’s 100th birthday and continue for the remainder of the year, concluding with the Global Citizen Festival in Johannesburg on December 2, headlined by Beyonce and Jay Z. As part of the initiative to assist travelers in celebrating Madiba and aid travelers in visiting South Africa’s cities and landmarks that influenced Mandela’s life, South African Tourism has launched its Madiba’s Journey App and South African Airways is offering a 10 day land and air special “Celebrating Mandela’s 100th” which takes you to Durban, Cape Town and Johannesburg. Each of these cities are beautiful tourist destinations in their own right and these travel options make it easier than ever to visit South Africa. I was invited to formally participate in the celebrations and follow the footsteps of Nelson Mandela, and what an experience it was for me. My trip began in Johannesburg, the commercial and cultural heartbeat of South Africa where President Obama delivered the keynote address at the 17th annual Mandela lecture to a packed stadium of 15,000 the day before Mandela’s actual birthday. Here, Obama delivered a resounding speech challenging the world to continue advancing Mandela’s visions of equality, justice and freedom. Needless to say, hearing Our Forever President deliver an electrifying, honest speech in the Motherland set the bar high and the rest of the trip didn’t disappoint. 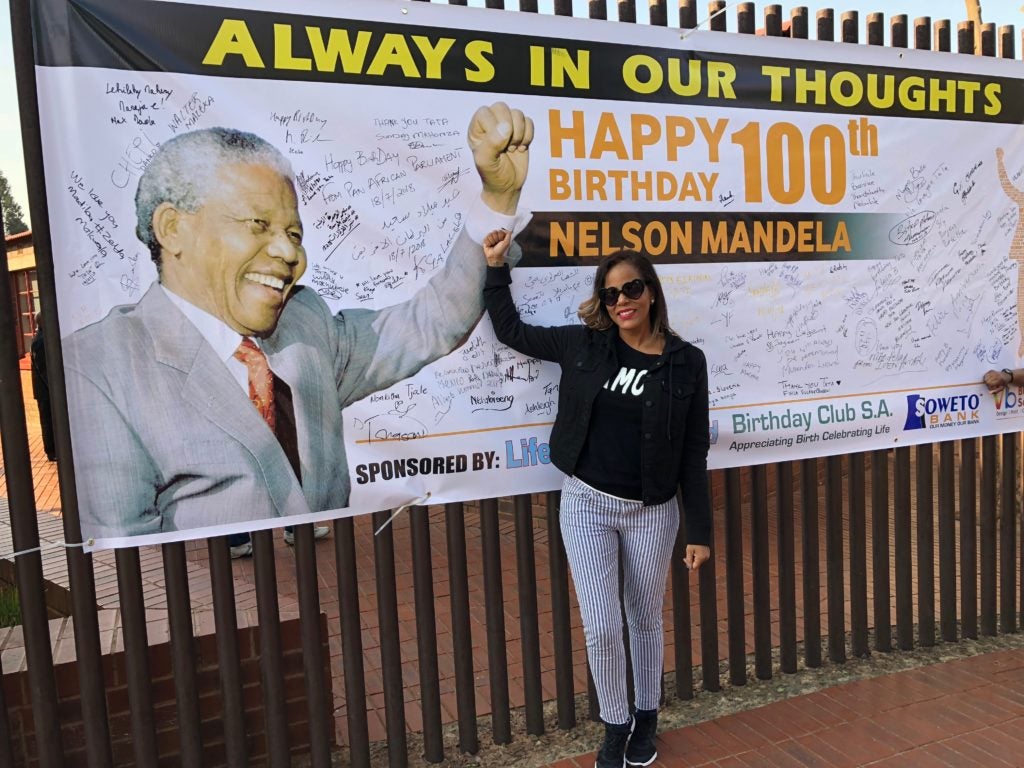 The following day, we visited The Mandela House, located in the township of SOWETO, a suburb of Johannesburg on Mandela’s actual birthday. Mandela and his family lived at this quaint house, which is now a museum, from 1946 until the 90s, during which time Mandela and Winnie were both in and out of prison. The energy outside on his 100th birthday was electric, with formal and informal celebrations befitting former President of South Africa. A DJ played music as African dancers greeted visitors who came to sign Mandela’s birthday banner which was strung on the wall outside The Mandela House. I signed the “birthday card” and paid homage to Tata offering birthday wishes, then wandered into the living room just in time to cut Mandela’s 100th birthday cake. I left feeling surreal. I had to check my camera, and thumbing through the photos, I sat in awe, feeling blessed that I was able to participate in such a historical moment. 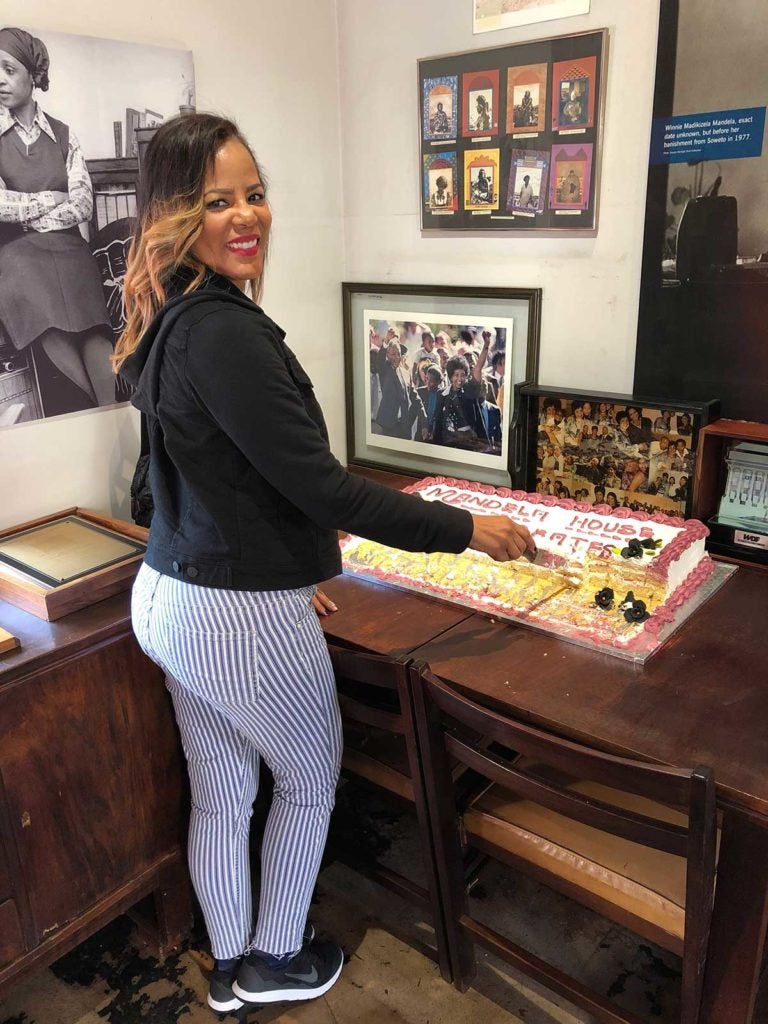 We also visited the Apartheid Museum in Johannesburg, which takes the visitor on a poignant and often disturbing journey of South African’s struggle to overthrow the Afrikaan government’s Apartheid regime. Before entering, you press a button and are randomly selected to enter through Blankes (Whites) or Nie Blakes (Non-Whites) gate and your experience begins from there. I entered through the Non-Whites turnstile, and was greeted by enlarged photos from actual passbooks that blacks were forced to carry that identified their race and restricted them to their designated township unless they’d obtained a “pass” from the government to travel. I wandered through the museum’s 22 exhibits, which took me on an emotional rollercoaster, thinking of the social injustices inflicted against our people in their homeland by a foreign government who stripped them of their mobility, their land, and their civil rights. The museum highlighted the epic and sometimes violent struggle of Mandela, the African National Congress (ANC), and ordinary South African’s in their quest to end Apartheid and restore democracy to their nation. WHERE TO STAY: The Palazzo Hotel located in Johannesburg’s Montecasino Entertainment District offers travelers a luxurious yet affordable stay thanks to the rand to dollar exchange rate (11:1 at press time.) The Palazzo also offers proximity to various high end dining and shopping options. Next, we visited Durban, a picturesque city that sits on the shores of the Indian Ocean. Personally Durban is one of my favorite cities in South Africa with its beachy, laid-back vibe, equally inspired by its Zulu and Indian heritage. Culturally, this city has special significance in Mandela’s legacy that spans 30 years. 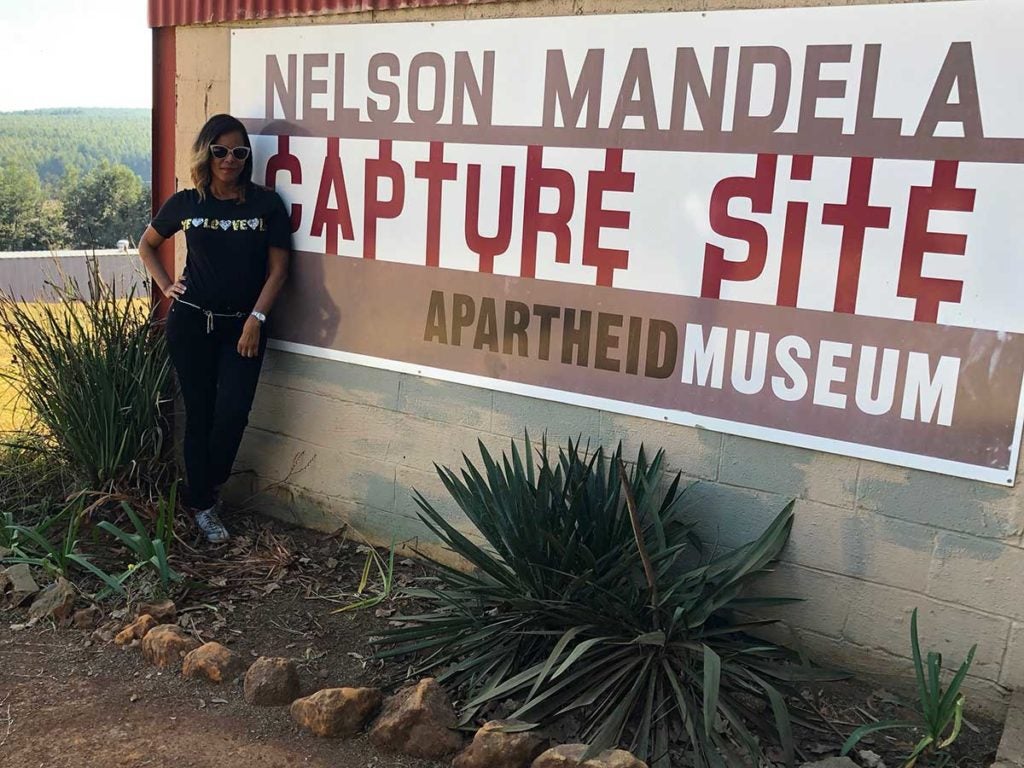 On August 5, 1962, while posing as a chauffeur and evading authorities for 17 months, Mandela was arrested just outside of Durban on a remote highway. Although Madiba had been arrested and stood trial several times prior, this time was different. It was this arrest that led to Mandela’s 27 year imprisonment as a result of the Rivonia trial. The government purchased the farm along that highway and erected The Mandela Capture Site, which has become a major South African tourist destination. You enter through a small Apartheid Museum, which leads to a path marked with monuments of Mandela’s life. As you wander down the path, a striking 30-foot steel structure that forms a silhouette of Mandela comes into focus. One of the most profound moments of my trip happened here as I stood watching a White toddler staring at the sculpture in awe. Immediately, Mandela’s words came to mind: “For to be free is not merely to cast off one’s chains, but to live in a way that respects and enhances the freedom of others.” Well done, Madiba. 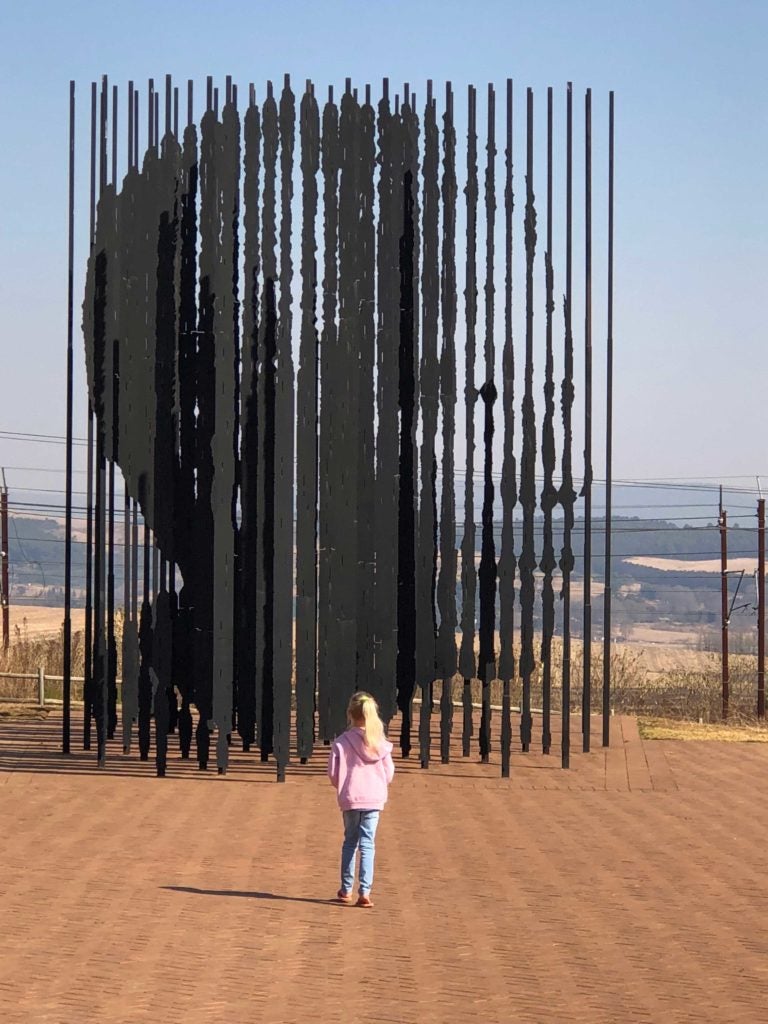 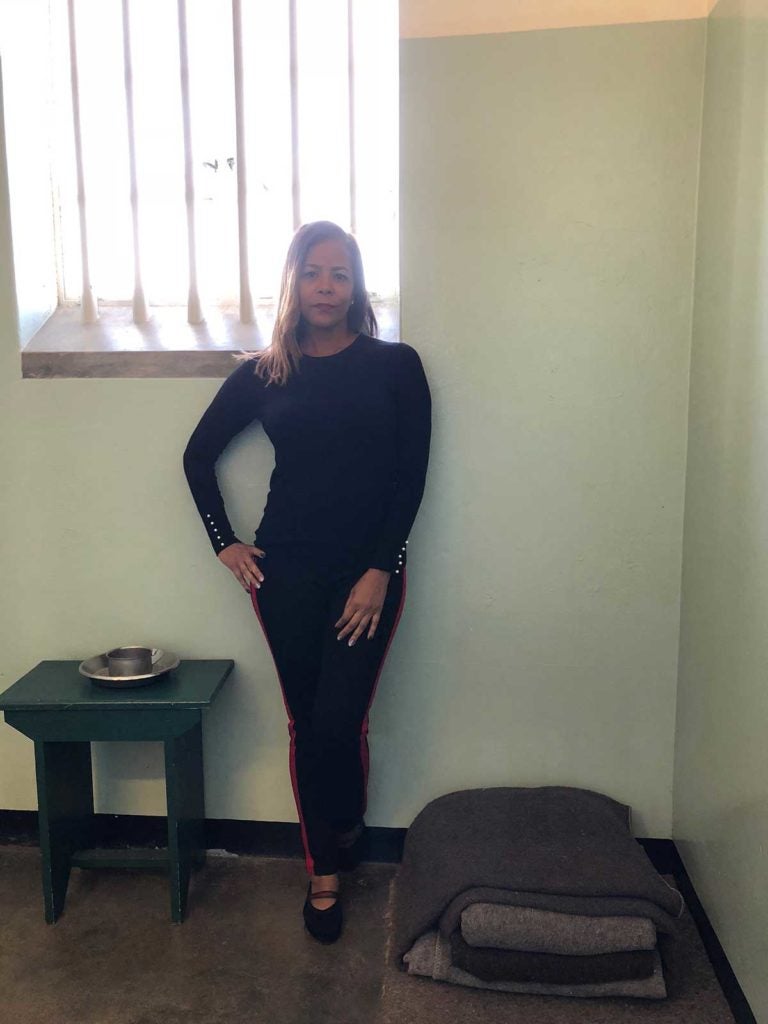 A short drive away, on the outskirts of Durban, we visited the Ohlange Institute, built on the grounds of the home (and now burial site) of the first ANC president, John Dube. After spending 27 years in prison, largely rendered silent by the South African government, Nelson Mandela got his voice back here. Just inside the halls of the school, Mandela cast his vote in South Africa’s first democratic election which ultimately elected him president of South Africa. Mandela then wandered up the hill to Dube’s gravesite and uttered the now famous phrase: “Mr. President, I have come to report to you that South Africa is now free.” Everything came full circle for Mandela right here in and around the seaside town of Durban. WHERE TO STAY: The Oyster Box Hotel, is a resplendent colonial style hotel overlooking the shores of the Indian Ocean. Voted the number one hotel in South Africa, the Oyster Box features an in house cinema showing first run and classic films, offers their famous Curry Bar on Saturday evenings, and has one of the most fantastic breakfast bars I have ever experienced while traveling. 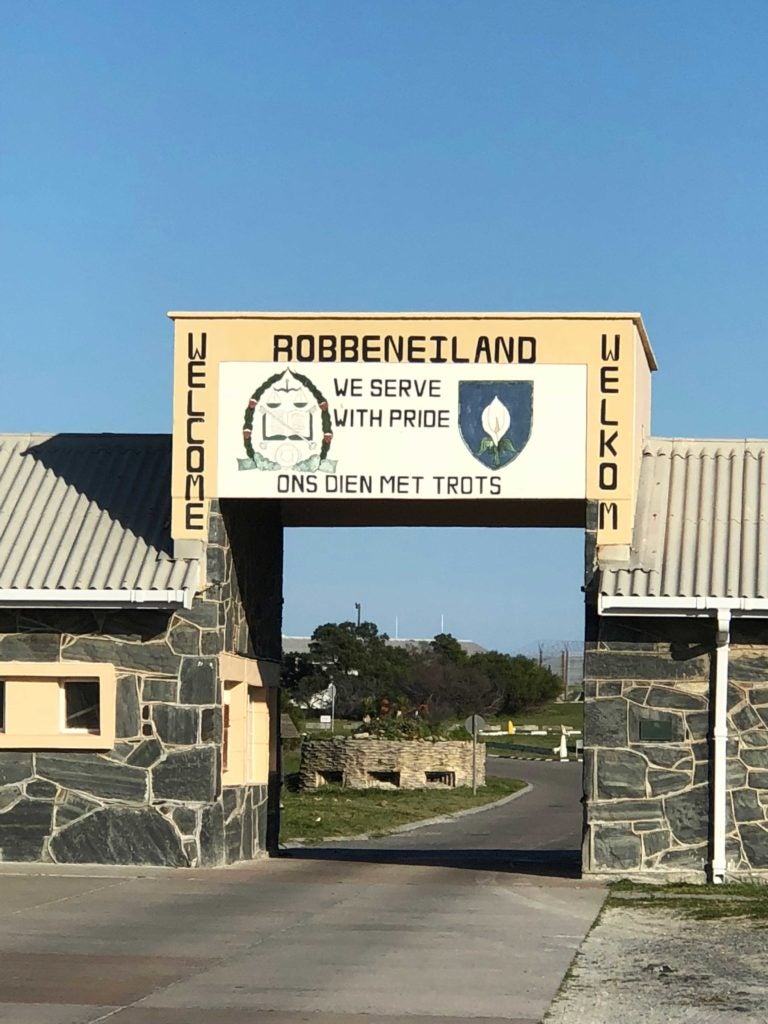 Next we headed to Cape Town, South Africa’s most visited destination. Cape Town’s beauty is unrivaled, with a temperate climate, stunning sunsets and world famous Table Mountain standing regally in the background. Mandela spent 18 of his 27 years behind bars gazing at Table Mountain from afar while imprisoned on Robben Island, which was a 20-minute ferry ride from Cape Town. Of his time on Robben Island, Mandela remarked “To us, Table Mountain was a beacon of hope. It represented the mainland to which we one day knew we would return.” Robben Island is now a museum and most tours are led by former inmates of the prison. 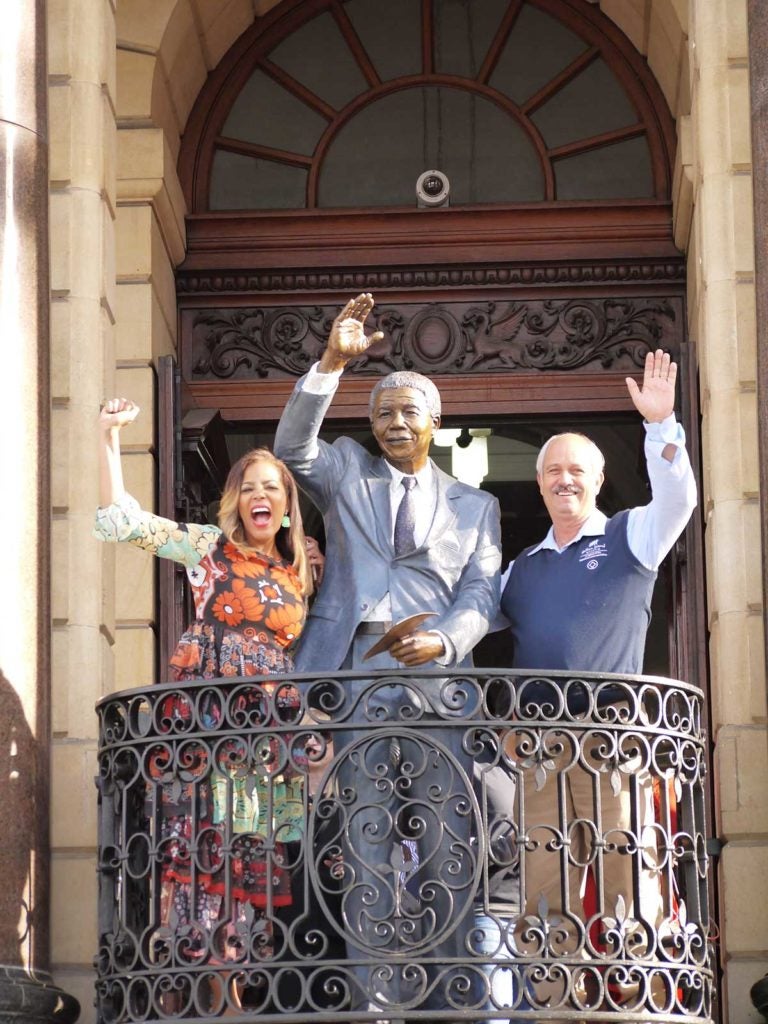 In February 1990, Mandela was released from Victor Verster prison just outside of Cape Town. Within hours, Mandela appeared on the steps of Cape Town City Hall, to address a crowd of 50,000 supporters gathered to hear his first remarks a free man.  Largely silenced by the Apartheid regime which stripped Mandela of his voice in an attempt to render him a persona non-grata, this was a momentous occasion for both Mandela and South Africa as a country and largely laid the foundation of Mandela’s path to his presidency, yet there was no commemoration or reminder of this historic moment. That changed during the Centenary celebrations when the City of Cape Town unveiled a life sized bronze statute of Mandela on the very steps of City Hall where he gave that celebrated speech. 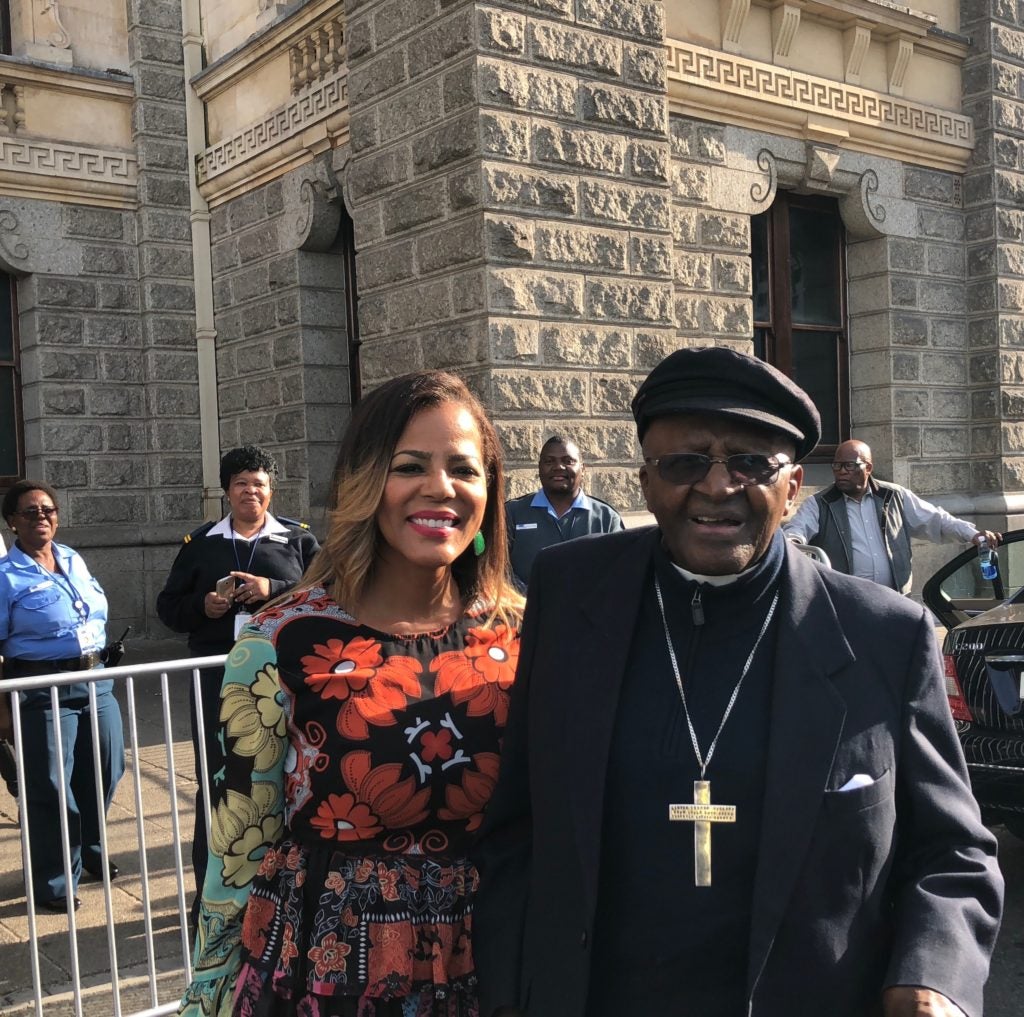 I attended the unveiling ceremony and scored a seat next to Christo Brand, Mandela’s former prison guard of 14 years. Talking to Mr. Brand, it is easy to understand the unlikely friendship between this prison warden and prisoner. I listened as he spoke fondly of his first meeting with Mandela, and the friendship that formed over the years which he commemorated into a book with Mandela’s blessing. Mr. Brand remembered Mandela as a humble man, a servant of the people, “not a hero,” as Mandela would frequently say. Madiba was a man who, Brand said, would have wanted the other freedom fighters to be remembered with him. I listened to the dignitaries remark on Mandela’s commitment to the people of South Africa, whose spirits may have been battered but never broken. Archbishop Desmond Tutu reminded us that Mandela’s “greatest triumph was restoring our pride and self-belief. The journey to discovering ourselves began here, this place, on that February day in 1990. That is what we celebrate today.” I left South Africa enlightened and connected, knowing that we not only share an ancestral heritage, but we are connected in our struggles. But South Africa is intent on healing the past, rightfully acknowledging those who aided in ending the injustices of apartheid and sharing their storied history and heroes with the rest of the world. To that end, the city of Cape Town is launching a new Mandela Legacy tourism route which is available as a self-guided option or through tour companies. If you’re so inclined, reach out to Mr. Brand who retired as manager of Robben Island’s bookstore a week after the statute’s unveiling who offers tours of Cape Town and Robben Island or book with Shaeed from Escape to the Cape to visit Cape Town, the Winelands and tours to the Cape of Good Hope. Where to Stay: The One and Only, Cape Town. The One and Only name is synonymous with class and sophistication and their Cape Town property lives up to every expectation. Situated near the Victoria & Alfred Waterfront, the hotel features Africa’s only Nobu Restaurant. The rooms are oversized and each features a view of Table Mountain. Walking along the hotel’s gardens, you are instantly transported to an urban oasis, with bungalows overlooking the infinity pool and a spa located on its own private island within the resort. How to get there: South African Airways offers daily non-stop flights to Johannesburg from Washington Dulles and New York City’s JFK Airport. Check their website often as they offer many airfare sales as well as vacation packages
Loading the player...