By Chic Busy Mom · Updated October 28, 2020
There’s a new literary trilogy that’s going viral and igniting a fire (mostly within women) across the globe and on every medium you can think of. The book is called 50 Shades of Grey, and it’s a Seattle-based story about two characters — Christian Grey, a powerful, insanely rich businessman and Anastasia Steele, a demure, nondescript college student. The story arc features the dominant/submissive culture, an unconventional love story, page-turning suspense… and a whole lot of eye-popping sex!

About a week later, one of the magazines that’s part of my company did a cover story on the book. I read the article about the author, E.L. James, a TV executive and mom of two who now boasts NY Times bestselling novels, a deal for an upcoming movie, and bankable success. Two days later, my office buddy came in talking about a new book she’d heard about from several of her mom friends. One told her she couldn’t put it down, another said that it was a great love story, and another was fretting about the fact that the print edition was on back order (might I point out that I heard the book downloads online at something like 1 page per second?)!

I had to see what all the hype was about. That night I dusted off my Nook Color, updated my credit card information, and clicked “download.”

By the next day, my life had been turned on a tilt. A week and a half later, I had read all three books and was slightly depressed that the stories were over. It was as if I was wrapped in a Technicolor cloak of fantasy and intrigue. Yeah, I know it sounds corny, but it was true… damn if all that hype was true! None of my friends had read it yet, so I unfortunately had no one to talk to. Mama needed a few recruits. (Fast forward four weeks later… five new recruits and plenty of water cooler chitchat!!) 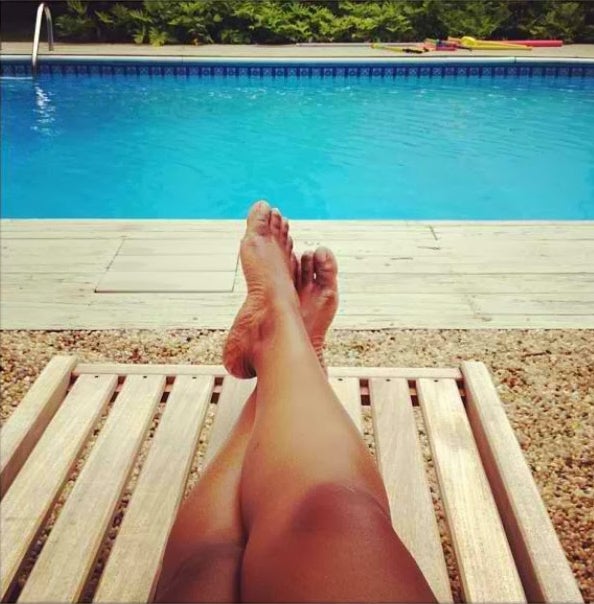 Pictured: My friend and I Nook’ing it up on the train ride home.

Now, I’m not going to lie and say this book is beautifully written, or that the author, E.L. James, doesn’t overuse the English language to paint her pictures, or that Anastasia Steele didn’t get on my damn nerves, or that I didn’t cover my mouth reading the raunchiness. This book has so much raunch that it’s been called “Mommy Porn“ — primarily because the majority of the trilogy’s readers are moms. That’s no surprise to me. What I will say is that it was refreshing and inviting, and the underlying love between the two characters is what binds it all together.

In my opinion, here is why there are an army of moms out there who like it:

1. It’s a fast, interesting read for those of us who don’t have a lot of time, and the author appears to be a regular wife and mother.

2. It is empowering in a “raise my freak flag” type of way. You feel like you can speak up for what you want in the bedroom (one mommy friend told me she felt like she had more of “voice” now).

3. The book reminds you of your sexuality — that you can be spontaneous and kinky, that all of it still runs through your veins. Mothers often get so caught up with the “lists” of day-to-day that we forget that we still can and used to be really hot! If you need convincing, check out this sneak peek clip from the 50 Shades episode of Dr. Oz. The first woman really hits the nail on the head.

4. The dominance of Christian is something that women find sexy. Not that we want to be told what to do, how to dress or what to eat (as Christian often does with Ana), but we don’t mind our partners to take charge in the bedroom. A lot of women are running their offices and homes, and the thought of releasing control in this area is well… very liberating.

5. It’s in fact a romantic love story, albeit a very twisted one. If you’ve really truly been in love — you know, the ride-or-die kind — you can relate to caring about someone so much that you would do anything for them.

I am quite sure that all this reading has sparked a lot of excitement in bedrooms across the world. If you search the #50shadesofgrey hashtag on Twitter, it will give you an indication. A lot of men who will never even crack open 50 Shades of Grey will benefit from this book and won’t even know why.

So if you are in the mood for looking for something a little different (not particularly new i.e. Zane) and want a good book to add to your repertoire… Download or buy this book today and let me know what you think.