For newlyweds, actress La’Myia Good and Grammy-nominated singer-songwriter Eric Bellinger, 2015 is already filled with so much promise. The couple surprised their fans by announcing their marriage, and pregnancy, on social media earlier this week. They also held their superhero-themed baby shower at the home of LaMyia’s famous baby sister, Meagan Good.

Bellinger—who is up for three Grammy nominations for his work on Chris Brown’s album X—later shared a photo of a pregnant and topless La’Myia on his Instagram. Though most commenters congratulated the mom-to-be, many questioned why she would go topless. The newly-minted Mr. and Mrs. Bellinger spoke candidly with ESSENCE.com about their love, why La’Myia isn’t ashamed of her maternity photos, and celibacy?

ESSENCE: Congrats on everything! How did you two meet?
Eric Bellinger: We met 13 years ago, we were both doing music and La’Mayia was in a female R&B singing group and I was in a male R&B group—we were managed by the same manager as well so we were just always around each other.
La’Myia Good: Yup, doing shows together too.
Eric: Mind you, back then she thought I was like a young buck.
La’Myia: He was a young buck; he was like 19! So, back then I’m looking at him like he’s a little boy [laughs] but I loved him still because he was always like a great person and his energy always stood out. Then over the years we kind of kept in contact through a common thread of people. But we lost touch for a few years.
Eric: We had mutual friends since we’re both originally from LA. I was hanging out with a mutual friend one night and I told him, ‘Yo, you have to hook me up with La’Myia’ and he never did. But eventually we reconnected organically.
La’Myia: Wait, he’s leaving the best part out! He called me one night and asked what I was doing. I told him I was preparing cereal. Our first date ended up being a cereal date because that’s my favorite food. So the coolest thing was that our first date was a cereal date; I came over and this guy had a whole set-up of just cereal. It was classic.
Eric: I won her over with cereal! It was the most insane first date. 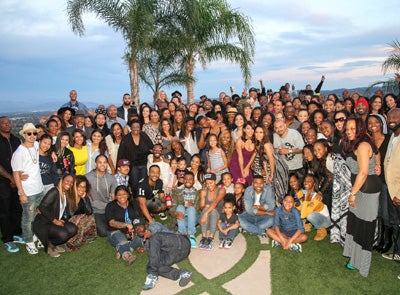 La’Myia, you posted a picture of Eric and yourself with the caption “The love God promised me.” Tell us about that.
Yes, I was on a journey of trying to be celibate. It was my own journey. I was learning to enjoy and love who I had become over the years—embracing my scars, embracing the bad relationships and just not letting it hurt me but grow from it. So I really went through this process of discovering myself and doing what felt right in my heart, body and spirit. It was a four-year journey of trial and error.

Why do you think your recently published maternity photos received so much backlash? Do you feel you have to always defend yourself?
La’Myia: Why can’t I be sexy in my maternity photos? I feel sexy and I feel good about my body; what’s the shame in sharing? I feel good about myself. People post stuff everyday when they feel good about themselves. I don’t understand what the shame or the embarrassment is. I work very hard to keep myself fit. And my husband loves it. It was his idea. I think there are these expectations, especially when someone is a Christian. There is an expectation about how we’re supposed to look and when we don’t meet those standards, then that’s when the comments and the backlash come in. Ultimately it’s about being true to who you are and how God uniquely made you.

Eric, did you expect this much backlash when you came up with the idea for the photo?
Originally I didn’t think there would be backlash; I just knew it would get attention. I wanted to do something that showcased La’Myia and how original she is. I wanted to bring her [personality] out. She’s from Cali; she always wears Chucks. She actually had Chucks on in the shoot. I had this whole vision, like ‘I want you to wear chucks, I want you to have chucks around your neck. I want you to do the rockstar [pose.] So, I wanted people to know who I married from just looking at that visual. They could know all about her just from that photo. 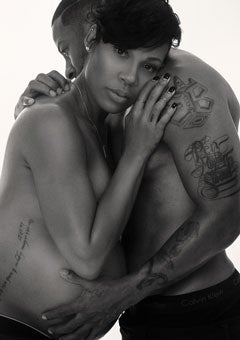 What parenting advice did you get from your friends like Usher and Ne-Yo?
Eric: Ne-Yo told us to ‘Get ready to get no sleep!’ I work with Usher a lot. He’s all about family first. I was actually with Usher in the studio when he got the call about one of his sons having an accident in a pool. He was so gone after he heard the news. When he came back he was like everything is cool now, and he told me ‘You just have to be careful.’ I’ve always been getting a lot of advice from my peers as far as priorities when it comes to fatherhood.

La’Myia what advice did your baby sis Meagan Good give you about being a newlywed?
More than just advice, examples. She tells me, ‘This is your family now, you have to put them first.’ When you have a family of your own you have to put them first. I really see how she puts her husband, Sony film executive DeVon Franklin, first in everything that she does. They both put in the effort.

Finally Eric— tell us how being an expectant father and newlywed informed the content on your forthcoming album, Cuffing Season?
I’m trying to be an example for the young adults and gentleman of our generation—that this is what it’s all about, it’s about love songs, [being married] and having one partner not many partners, there is another alternative—it’s about having that one person to turn up with. You can be in love and still turn up. All the songs on Cuffing Season still sound like club songs and turn up songs but it’s focusing on the concept of having one person to do it all with.  So now, the ones in relationship finally have something to listen to and the ones who aren’t in a relationship will be inspired to be in one. Every time I play it for my boys who are single, they are like ‘Yo, you’re making me want to go settle down now.’