By Charli Penn · Updated October 23, 2020
Calling all female athletes across the world: Nike wants you to know it has your back, and the company will continue to innovate and design with your confidence and futures in mind. In Paris on Monday Nike brought together more than 28 of the top female athletes in the world, including Olympic winning gymnast Simone Biles and champion fencer Ibtihaj Muhammad, to highlight their latest efforts and partnerships to support female athletes of all ages. In a moving press event inside the historic Palais Brongniart, the company revealed its plans to further innovate their product designs for women, specifically female athletes, so that they can perform at their best and feel good while doing it. In celebration of this summer’s FIFA Women’s World Cup in France, Nike unveiled 14 National Team Collections. 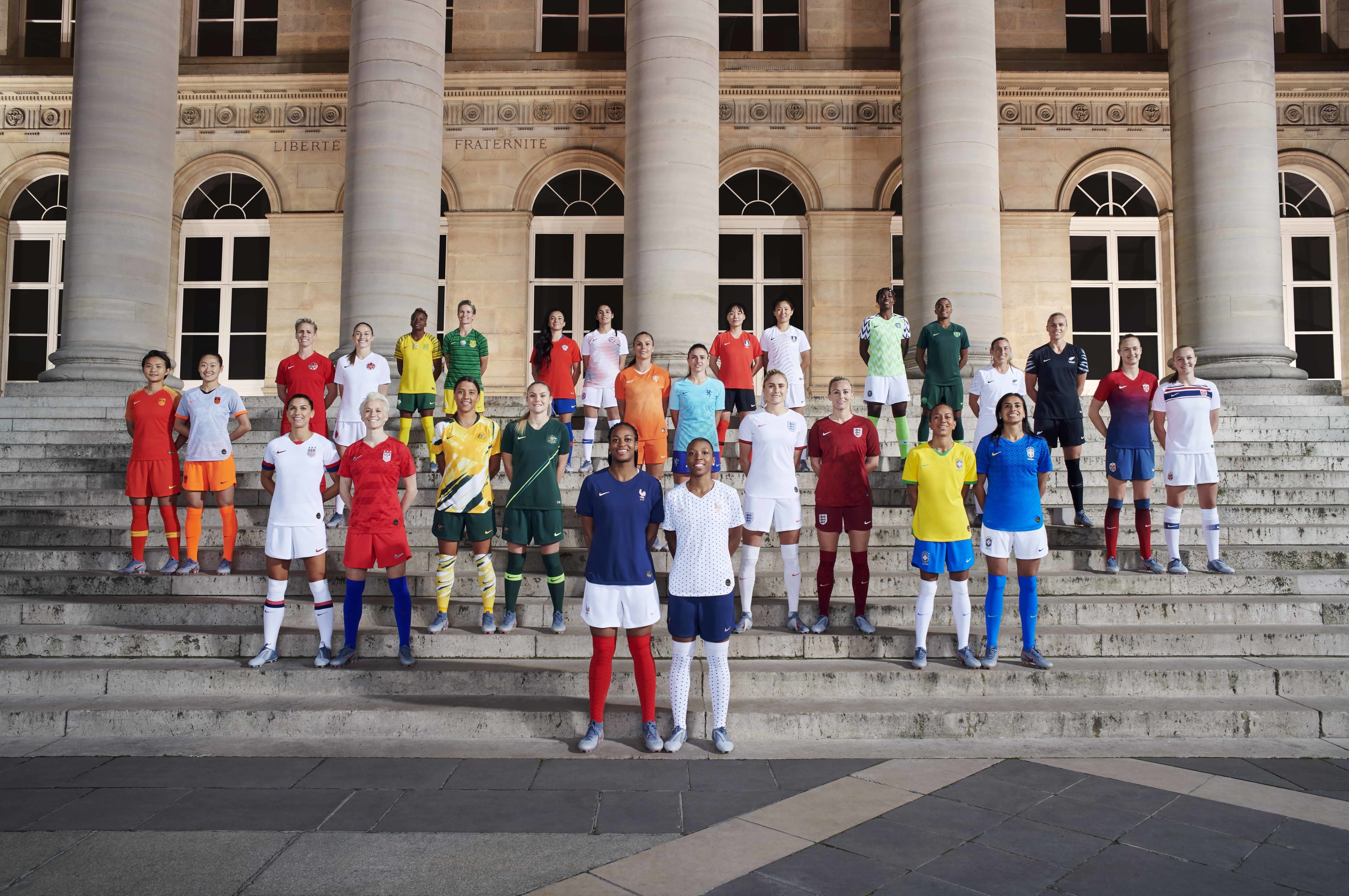 Some of the world’s top female soccer players, including France’s powerhouse player Marie-Antoinette Katoto, were on hand to celebrate Nike’s deepened commitment to female athletes. The 2019 Nike women’s football kits are the result of three years of physiological testing and perception research. “We have a clear mission to create access to sports for all athletes,” said Janett Nichol, the VP of Apparel Innovation at Nike leading the innovation team for the Nike Apparel NXT organization in Portland, where the company has gathered detailed input on fit from professional footballers using 4-D scanning and motion capture. “When we have this conversation specifically around women, it’s really all about women. We believe in the power of the community. We believe in the power of all women. And, so we’re really focused on that and it gives us a tremendous source of pride to make sure that we’re able to bring everyone to the table because we believe here that if you have a body, you’re an athlete.” 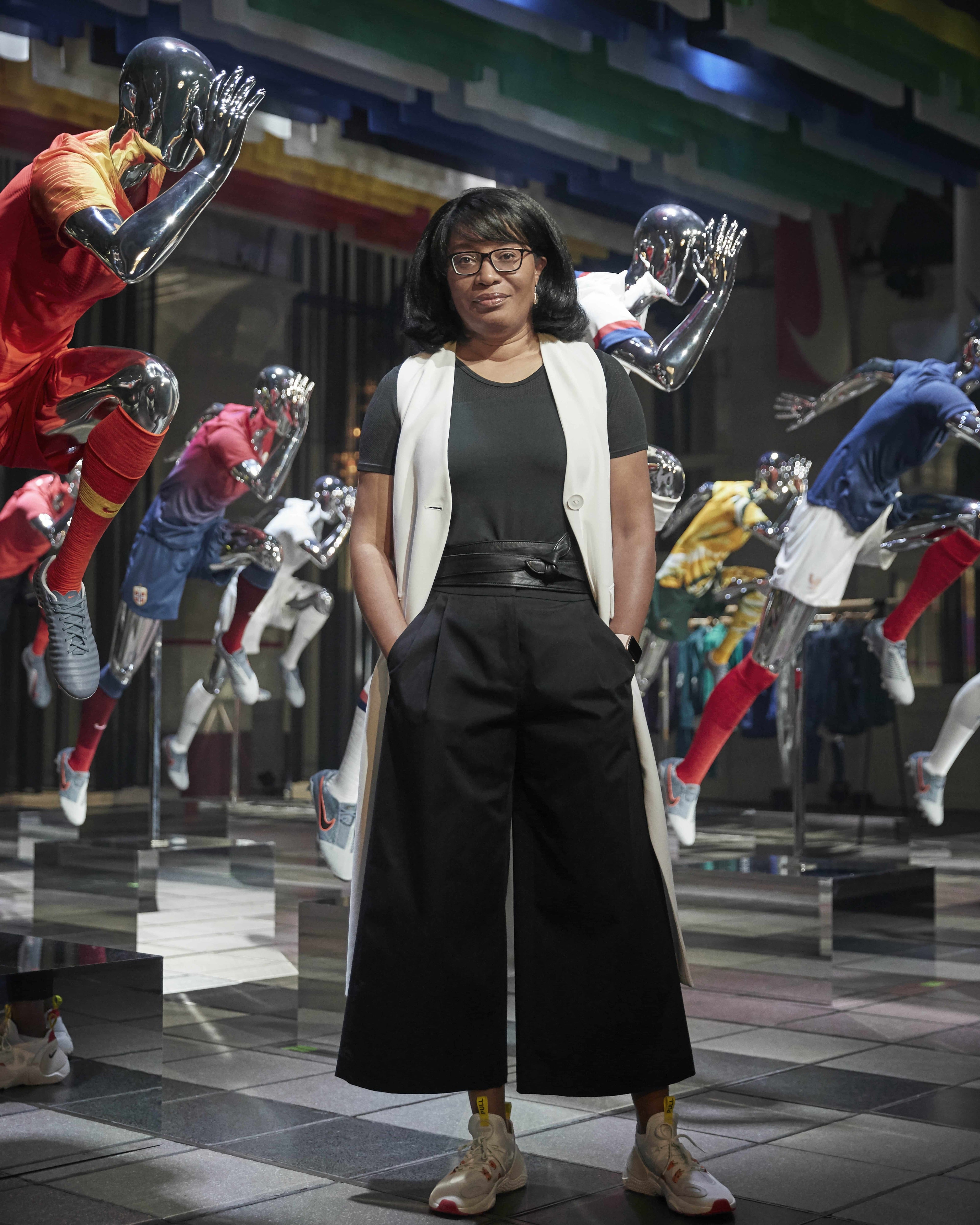 Nike VP of Apparel Janett Nichol poses proudly with the custom global kit designs her team worked on for over three years.

Nike promised to keep its sites set on the future for athletic wear for women and female athletes. “Nike’s commitment is to continue our leading support of competitive athletes, invest in the next generation at the grassroots level and deliver more innovative and compelling product design for women,” said Nike, Inc. Chairman, President and CEO Mark Parker in a press release. 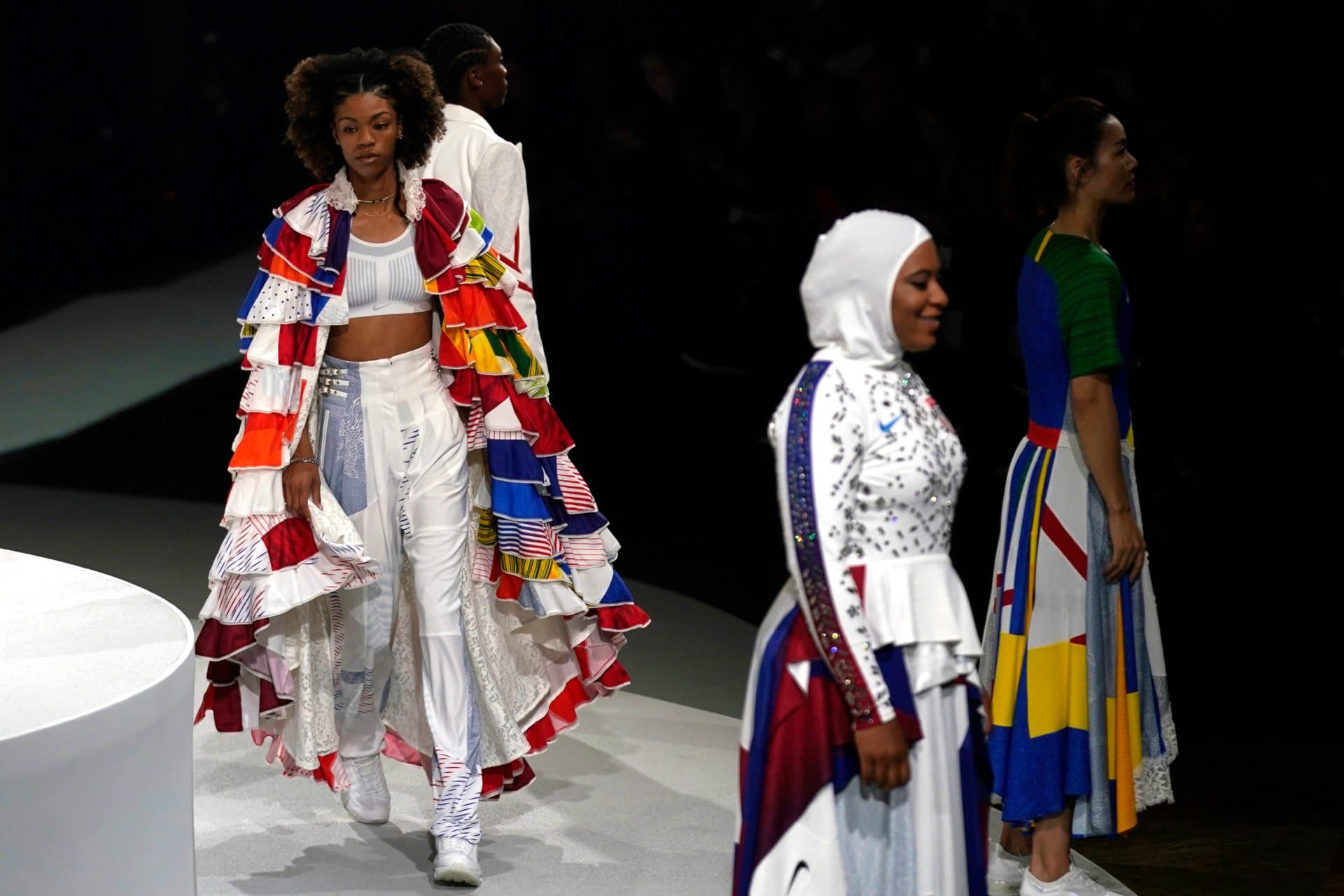 As more than 40 female athletes, of all ages, boldly walked onto the rotating stage for a powerful demonstration of the brand’s commitment to women, Nike also unveiled their plans for future female-focused partnerships, like a new three-year partnership with UEFA Women’s Football to support standout female athletes worldwide. Nike is also partnering with the WNBA, FIBA and the Chinese Basketball Association. At the collegiate level, Nike announced it will team up with more than 200 universities across the U.S. to support more than 25,000 top female athletes across multiple sports with a focus on addressing many of the barriers young female athletes face and giving young women more access to products that help them play more confidently on the field or the court. 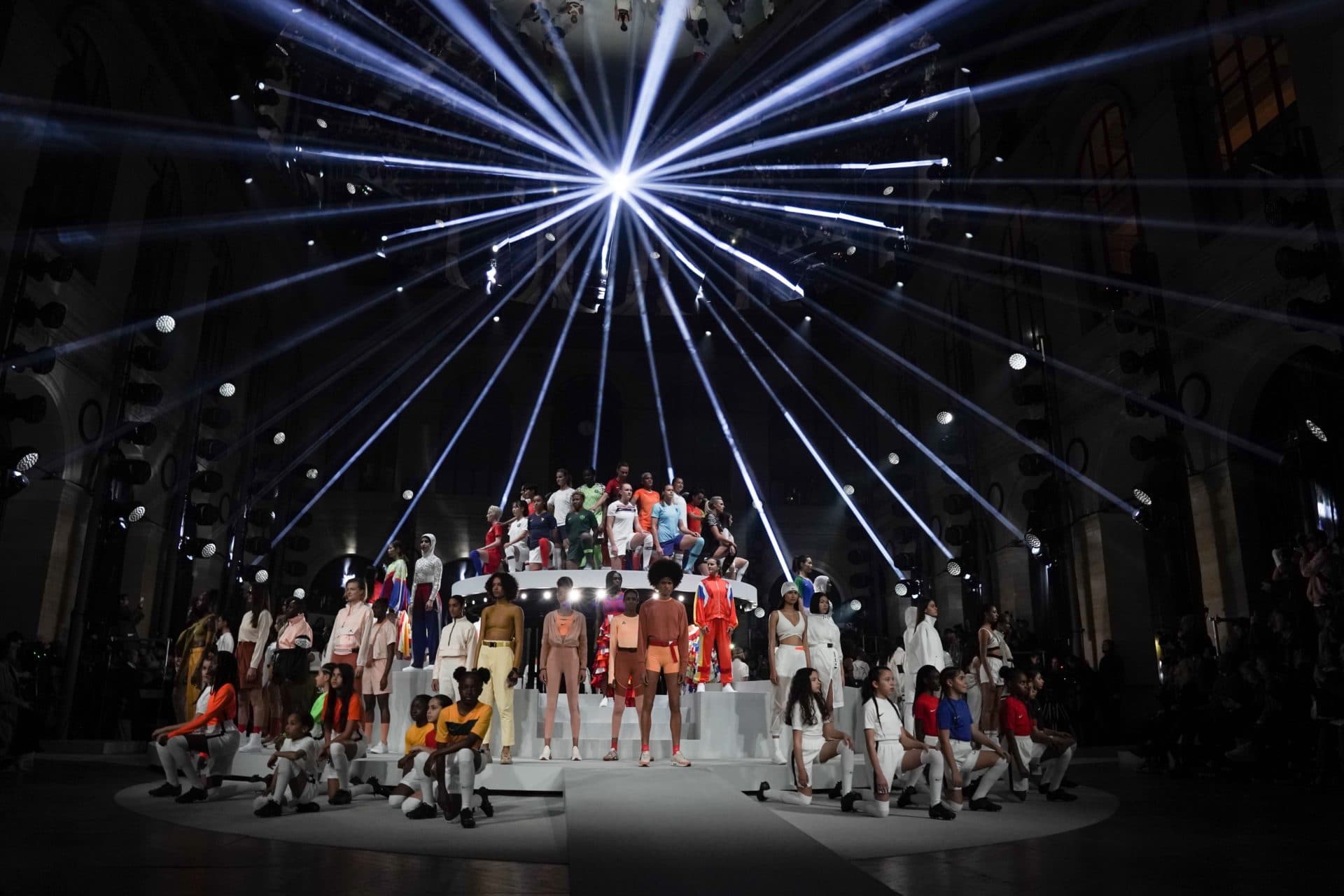 “The first uniform I ever had felt so big and so uncomfortable, and I was constantly fixing myself,” said African Women’s Player of the Year, Thembi Kgatlana,22, a member of the South African National team who was also on hand to celebrate Nike’s big announcement. “Now we have kits that are designed for us and based on our bodies. It’s special.” 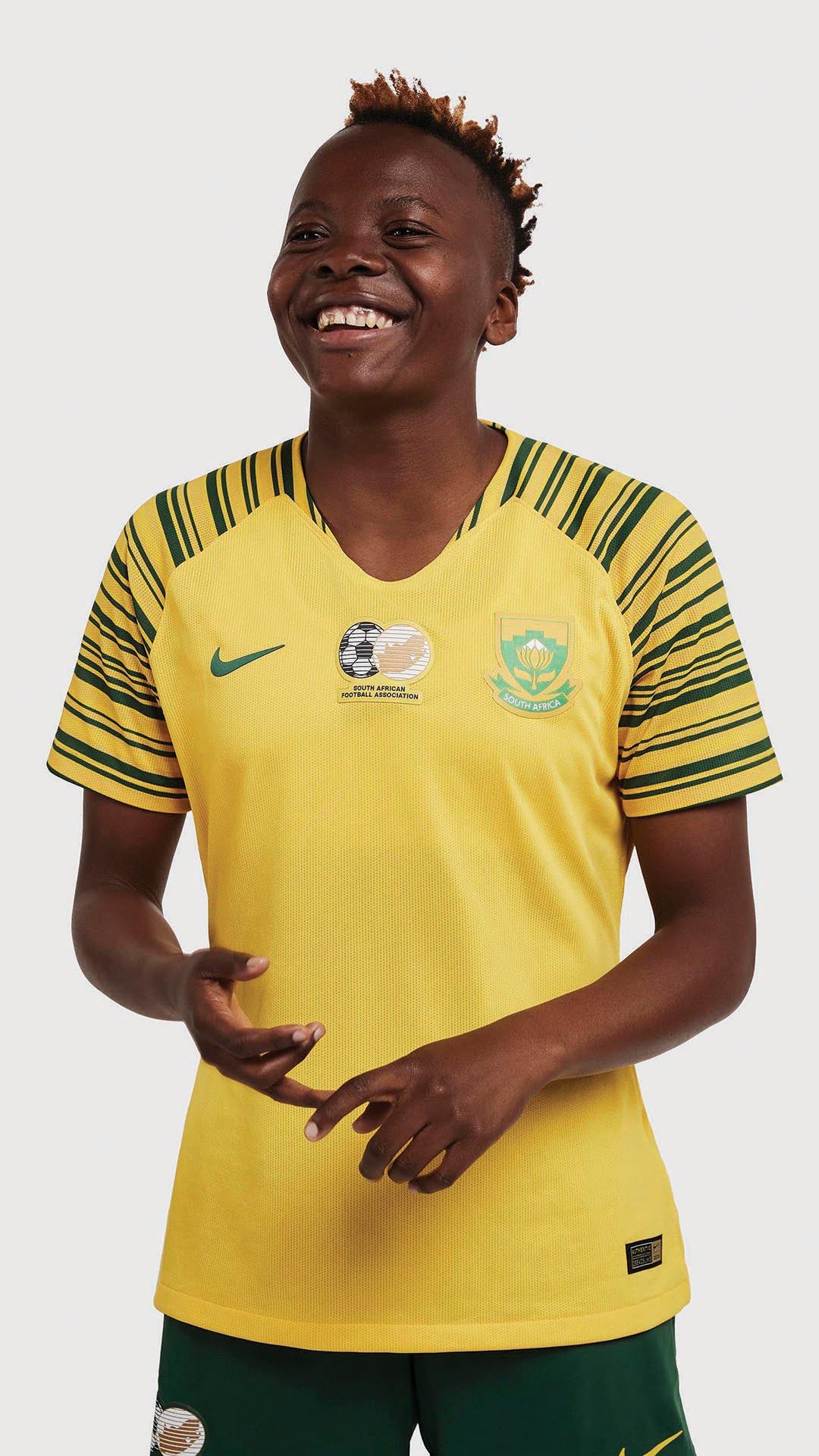 Kgatlana believes that the overall message Nike is pushing is what matters most. “It’s important because you can tell that Nike truly wants women to feel and be their best no matter where they go and which sport they play, which is an important message for women all over the world,” she added. In Paris, Nike plans to partner with Sport dans la Ville to train more female coaches and engage young women in a more athletic lifestyle. Globally, Nike says it will also collaborate with Women Win and Gurls Talk to support rising female coaches who are inspiring the next generation. Female athletes need apparel that’s designed to help perform to the best of their body’s abilities and still maintain body confidence while doing so. Nike is piloting a global program to provide products such as the Nike Pro Hijab and Nike Classic Sports Bra to girls in need through schools and community partners worldwide. “My work with Nike is just so profoundly profoundly inspiring in so many ways ,” continued Nichol. “I represent as a Black woman and I represent as a role model for a lot of women. What we want to make sure of is that what we’re doing as an organization is making sure that we are creating an environment that is extremely inclusive for all. The work that we’re doing is about bringing everyone together to show up as your best self, whatever that is for you. And we just want to be there on the journey and we are very committed to doing what we do when it comes to empowering athletes, especially women.” Bravo to Nike for continuing to acknowledge and promote that the future is, in fact, female.
TOPICS:  Floetry