For the past few weeks, a muted anger has been rumbling in France’s inner cities.

On the outskirts of Paris in Beaumont sur Oise, Adama Traoré was arrested on July 20, the day of his birthday, after he tried to interfere with officers arresting his brother. Shortly thereafter, Traoré died while in police custody. According to the first official report, he succumbed to a heart malfunction. Expert reports would later conclude that it was actually asphyxiation.

Adama Traoré was a young Black man and a Muslim.

While the eyes of the world have been riveted on the United States—where, in the same week, two Black men Alton Sterling and Philando Castile were killed by policemen—the death of a French Black Muslim man in similar circumstances does not seem to provoke the same reaction.

At the initative of Traoré’s family, to honor his memory, there were several marches organized proclaiming a Black Lives Matter France movement in and outside of Paris. On Saturday August 30, a new march permitted by the local prefecture took place. It was supposed to extend from the Gare du Nord to the Bastille, but demonstrators were unable to leave their point of origin. Inexplicably, the demonstration was caught in a stranglehold by about forty members of the French riot control forces (CRS), who left the group marking time for several hours.

Police intervention in peaceful demonstrations is a new means of denying freedom of speech to French citizens. Our country, after having been cruelly and serially attacked last November, has been under a government-declared state of emergency. Meant to temporarily reinforce the power of the civil authorities and restrict public freedoms, the measure was created in 1955 to counter Algerian independentist revolutionaries who were at war against colonialist France. Since that time, it has been applied three times, including present circumstances. In 1986, in New Cadedonia, it was applied against an pro-independence anti-colonial uprising. In 2005, it was applied when revolts broke out in French inner cities, following the deaths of two youths of color, Zyèd Benna and Bouna Traoré, while being chased by the police. In all these cases, this exceptional measure to repress colonial subjects or their descendants who today are victims of the systemic racism, results from the colonial era.

This temporary measure, which according to the initial law should not last longer than twelve days, is slowly but surely ushering in a police state that is suppressing its citizens’ freedom of speech and making them victims of institutional oppression.

Media coverage of such tragedies is always too subtle and political reactions are too timid, if not absent. Of the few media outlets that have mentioned the tragedy, its racial aspect was systematically omitted. Why suppress the evidence? 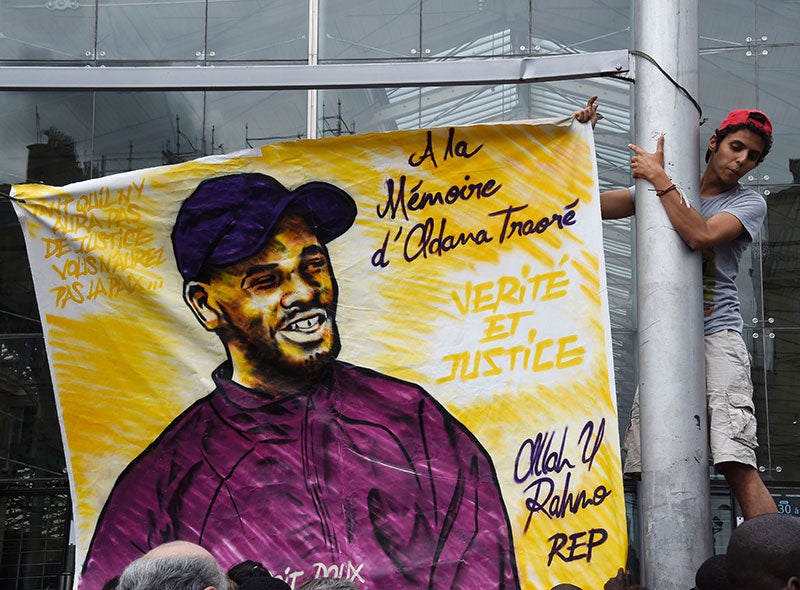 A man hangs a banner with a portrait of Adama Traore reading 'As long as there's no justice, you won't have peace', 'In memory of Adama Traore' and 'Truth and Justice' in front of the Gare du Nord train station during a march to protest at the death of Ad

Adama Traoré was a young Black man who lived in the inner city. Undoubtedly, this cost him his life. In France, this description corresponds to the profile of those unfortunates who lose their lives each year during or following a police intervention and has been denounced by Amnesty International for several years.

In France, we don’t have the same weapons culture as America does and the kind of gun murders recorded in the States are much more infrequent here. In France, death by asphyxiation is one of the main causes of death of young Blacks and Arabs arrested by law enforcement. In 2007, Lamine Dieng died of asphyxiation in a police van. In 2004 Hakim Ajimi died of asphyxiation after his thorax was crushed by a stranglehold used by police.

In 2015, Amadou Koumé died of asphyxiation after being arrested in a bar. It is difficult for us to give visibility to these deaths that affect the majority of non-white French citizens. How could we ever prove police guilt when these deaths occur without witnesses and behind the blinders of police wagons or behind the walls of police stations?

Last March, I was a guest on the French Parliamentary Channel, LCP, for a discussion of police violence in the United States. As long as we talked about American institutional racism, there was consensus. However, as soon as I brought up the parallel with the French Police, the consensus disappeared. My interlocutor, Congressman Axel Poniatowski seemed revolted. “I cannot allow it to be said that there is an institutional problem in the French Police; the problem that exists in the U.S. cannot be said to exist in France.  The French National Police is doing a remarkable job.” The usual denial.

In France, where the racism of American police is promptly recognized as racist, I am stunned by the incredible ability to omit the obviously racial aspect of this same kind of tragedy when it occurs on our soil.

The terrorist threat has become the pretext to not acknowledge a structural problem that has existed for many years.

Since 1979, all uprisings that have broken out in urban centers were following violent police interventions. Each time it’s the same scenario: a police action goes sour; a (young) man is killed; the police invoke legitimate defense or death by “natural” causes; the ensuing uprising is put down; the family of the victim institutes a legal procedure; the officers are acquitted.  A routine assassination.

Along the same lines, Middle Eastern or African refugees who spread into the streets of Paris are often beaten by police officers. The day following the death of Adama Traoré, the police summarily evacuated 2,500 refugees, among them 100 women and children, from their makeshift residences. This took place in the middle of Paris under the beautiful skies of the City of Light. I know that France is well viewed in the United States, especially among African Americans who remember that Paris was the refuge of many Black intellectuals such as James Baldwin who fled segregation in the 20th century.

A few months ago I completed a documentary, From Paris to Ferguson: Guilty of Being Black (Not Your Mama’s Movement is the American film) to remind the world of the importance of the manner in which systemic racial violence globally affects those ethnic minorities born of the history of slavery and colonization. In France, just as in the United States, Black Lives Matter.

Rokhaya Diallo is a French journalist, writer, and award-winning filmmaker. Her latest film, Not Your Mama’s Movement, will premiere at the Schomburg Center in New York on October 26, 2016. Follow Rokhaya on Twitter @RokhayaDiallo and subscribe to her blog, RokMyWorld.