There is an African proverb that says, “Until the lion tells her own story, the tale of the hunt will always glorify the hunter.”

Beverly Stanton McKenna is one such lioness.

She recently spent a weekend busy with tours and events at Le Musée de f.p.c., the house museum she founded with her husband Dr. Dwight McKenna in New Orleans and believed to be one of a few institutions of its kind, dedicated exclusively to collecting, preserving, interpreting and sharing the legacy of “free people of color,” people of African descent who were free before the Civil War.

Because McKenna is telling the story, the doors to Le Musée de f.p.c. open to a sculpture and a painting that depict enslaved Africans and she proudly displays a photograph of her great-grandmother, who was born enslaved. She wants to remind museum visitors that the enslavement of African people is a very real and raw part of a not too distant history, just before revealing that there is more to “our story.”

Once inside Le Musée de f.p.c., the museum focuses on free people of color—philanthropists, physicians, skilled craftsmen, artists, newspaper publishers, attorneys, composers, writers, abolitionists and 19th century civil rights activists, who were an accomplished, well-educated populace that owned property and paid taxes, but could not vote or hold public office. That fact spurred many of them to make the fight for not only their rights but those of all people of African descent, both enslaved and free, a chief cause. Le Musée de f.p.c. tells their stories by highlighting men and women like surgeon, activist and newspaper publisher Dr. Louis Charles Roudanez; businessman and philanthropist Thomy Lafon; and the venerable Henriette Delille, who founded the Sisters of The Holy Family, an order of Black nuns, just to name a few.

There are still many people who don’t know the extent of this history, because it has been hidden and twisted, McKenna says, so she loves watching visitors leave the museum after a tour.

“As people depart Le Musée, it seems they walk a bit taller, their shoulders back,” McKenna says. “Their stories have been reaffirmed. They have new-found pride in their heritage and knowledge.”

McKenna’s desire to tell her own story and the stories of other people of African descent dates to when she was a young girl growing up in Midwest, recalling the many copies of Black newspapers regularly delivered to her parents’ home in Indiana—The Chicago Defender, The Pittsburgh Courier and the Indianapolis Recorder among them. Reading those newspapers for, by, and about Black people fueled her passion to become a storyteller and directed her plans to major in journalism though her parents tried to dissuade her.

“They told me as a Black woman, I would never get a job as a journalist,” she recalls. “They said I should major in nursing or education or something more serious.”

It was the 1960s. And the field of journalism, especially in the mainstream, was still very much occupied by white men. That reality was punctuated during her summer break from college. 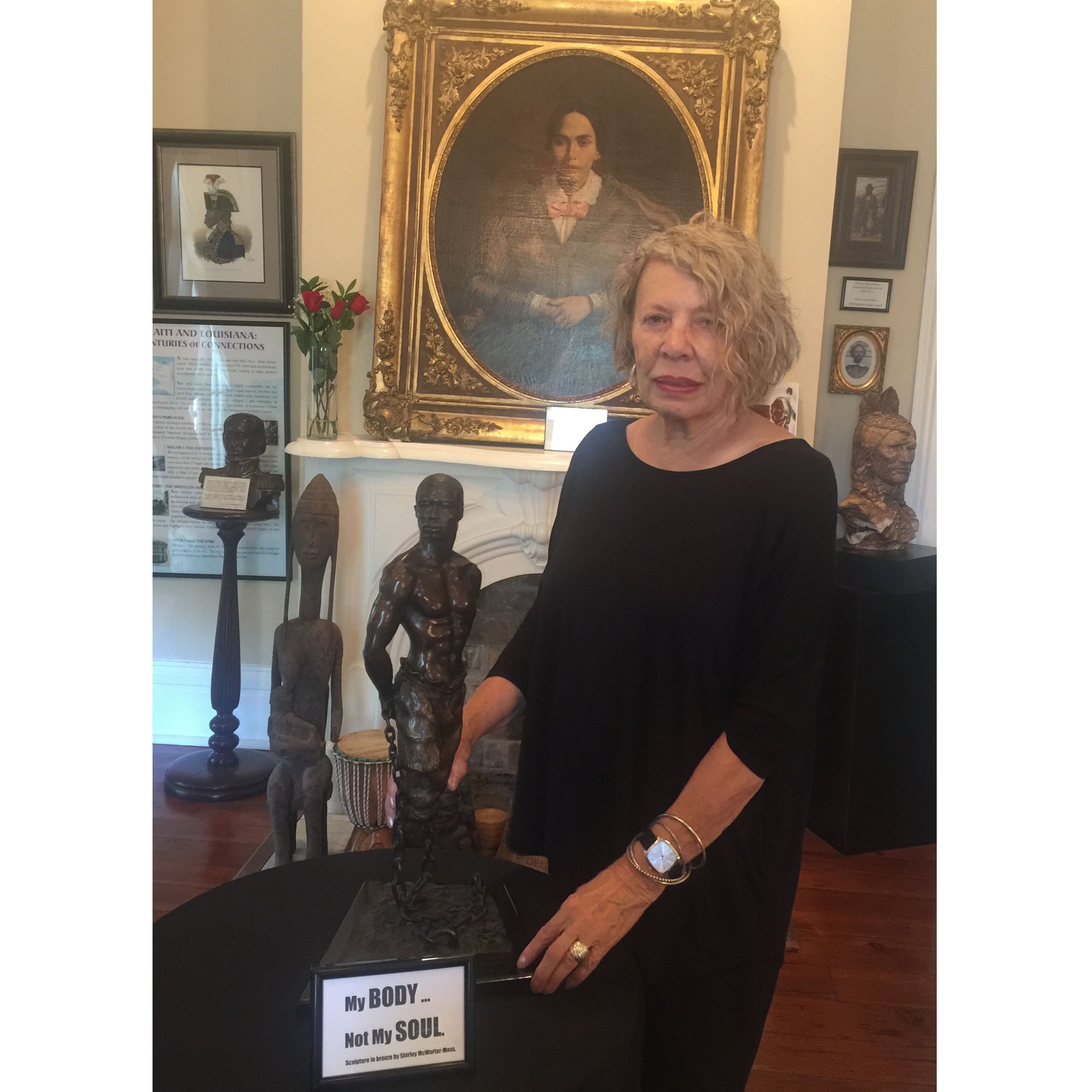 After completing her freshman year, McKenna returned home and went to the local daily newspaper hoping to land an internship only to be told by the management at the Fort Wayne Journal Gazette that the paper had never hired a “colored” intern or reporter and she was not about to be the first.

She went back to Indiana University in the fall and declared her major in English education.

She may have changed her major, but not her mind. And though it would take several decades, she eventually realized her dream of becoming a journalist. After transferring to and graduating from Tennessee State University, she moved to Washington, D.C., where she worked as an English teacher. She also met a young doctor during his surgical residency at Howard University. They married, started a family and ultimately settled in his hometown of New Orleans, where in November 1985, they along with two young professionals, Kermit Thomas and James Borders, founded a monthly newsmagazine, The New Orleans Tribune, where Beverly McKenna serves as publisher and executive editor—hell-bent on telling stories that elevate, illuminate and empower Black New Orleans.

“I feel very blessed to be able to do what I always wanted to do and to do it at an ownership level surrounded by people who share my mission and goals,” says McKenna, adding that in hindsight, she could have never really worked successfully for a mainstream media outlet anyway. It certainly would not have allowed her the freedom to be the bold and unapologetic voice that many Black New Orleanians have come to rely on.
Others agree.

“For 30 years, The New Orleans Tribune has been a consistent voice for justice, democracy and equality for poor, marginalized and forgotten citizens of New Orleans,” says Brenda Billips Square, a New Orleans native, archivist and minister. “It has confronted the forces of oppression and called on those in authority to do right. The Tribune has also documented aspects of African-American life, culture and history, making it an important source of power and hope.”

Although she had surpassed her dream by not only becoming a journalist, but a newspaper publisher, the idea of opening a museum became an imperative for the McKennas after Hurricane Katrina. For Beverly McKenna, it was an extension of the desire to ensure that Black people and their experiences were captured in their voices, fueled by a passion she shares with Dr. McKenna, one they have attentively pursued for decades—collecting African-American art and material culture. In addition to Le Musée, the McKennas also founded the George and Leah McKenna Museum of African American Art, named in honor of Dr. McKenna’s parents, esteemed New Orleans educators, some 15 years ago.

McKenna says returning to New Orleans in the wake of Hurricane Katrina and finding all of their collection intact, unscathed by the storm and flood, was a sign that they needed to create a space to show their collection and share the authentic stories of people of African descent with others. After Katrina, she began renovating a distressed, but historic house purchased prior to the storm, and Le Musée de f.p.c., was founded. Since opening, Le Musée de f.p.c. has hosted countless tours for groups large and small, many surprised to learn of the rich history, culture and impact that free people of color have had on New Orleans, the state and the nation. It has also been the site of a number of art exhibitions and cultural events. Though the efforts—two museums and a newspaper—may seem vast for one family, the McKennas delight in sharing their collections with the community.

It is important to McKenna that Le Musée de f.p.c. tells the story of free people of color from a decidedly different perspective than the more lascivious one typically embraced by the mainstream that depicts the existence of free people of color as the result of relationships between white men and mixed-race women promulgated by a system known as plaçage or quadroon balls, or that free women of color acquired their wealth, their freedom or the freedom for their children because of the benevolence of white suitors.
“Yes, that existed,” she says. “But there are just as many stories of entire families of free people of color with free men of color as heads of families, owning property, living their lives, and making an impact not tied to that storyline. Some came here as free people of color from the Caribbean. Others were formerly enslaved people that ran away or the even more remarkable story of those who bought their own freedom or the freedom of their family members.”
These days, McKenna splits her time between promoting and nurturing Le Musée de f.p.c. and furthering McKenna Publishing, which has expanded to include digital offerings, as well as The New Orleans BlackBook, an annual directory of African-American owned businesses, and Welcome magazine, a guide for Black Tourists in New Orleans, in addition to the newsmagazine which celebrated 30 years in 2015.

For more information on Le Musée de f.p.c., visit www.lemuseedefpc.com. For more about the George and Leah McKennas Museum of African-American Art, go to www.themckennamuseum.com. To learn more about the New Orleans Tribune, visit www.theneworleanstribune.com.