We all have those days when being a Black girl feels a little less than magical and some of our favorite ladies in music, politics and public service took a moment to remind us that we are not alone during the 2018 ESSENCE Festival’s daytime Conference & Expos. FACT: We most definitely have a blast celebrating all things amazing about Black women during ESSENCE Festival weekend, but there's also plenty for guys to do and this year, there will be more than ever. So whether you're thinking of making it a guys trip or just surprising your significant other with a trip they'll never forget, fellas, come on down!!

The panelists shined a spotlight on the impact of Black women supporting each other through partnership, motivation, providing opportunity, and having each other’s backs. With powerful moments of vulnerability, love overflowed as they shouted each other out for friendships and mentorships built over the years.

She went on to reference the Essence Festival’s exclusive launch of Sister Love; her new jewelry line with long-time friend Simone I. Smith, who is married to LL Cool J. Blige said her admiration of Smith’s style and entrepreneurship inspired her to collaborate and create jewelry fit for all ages.

Pivoting the conversation slightly, Queen Latifah shared her thoughts as a successful entertainer and businesswoman who has never been afraid to disrupt the status quo. During the panel, she highlighted the Queen Collective, her new initiative that aims to fill the void of women directors in TV & Film.

“We’re giving the opportunity to two female directors to create their own project from A to Z,” she said. “They’ll be taken care of from start to finish.”

When asked about the women who lift her up, Latifah shed tears as she remembered the legacy of her mother, who died earlier this year from heart complications.

“My mother was the person who showed me what being a woman is all about, who lifted me up, who encouraged me and believed in me,” she said. “Whenever we thought of some crazy idea, we went to her and she would say, ‘You know what, baby? You can do it. Y’all can do it. Just putting that little extra push behind us.” 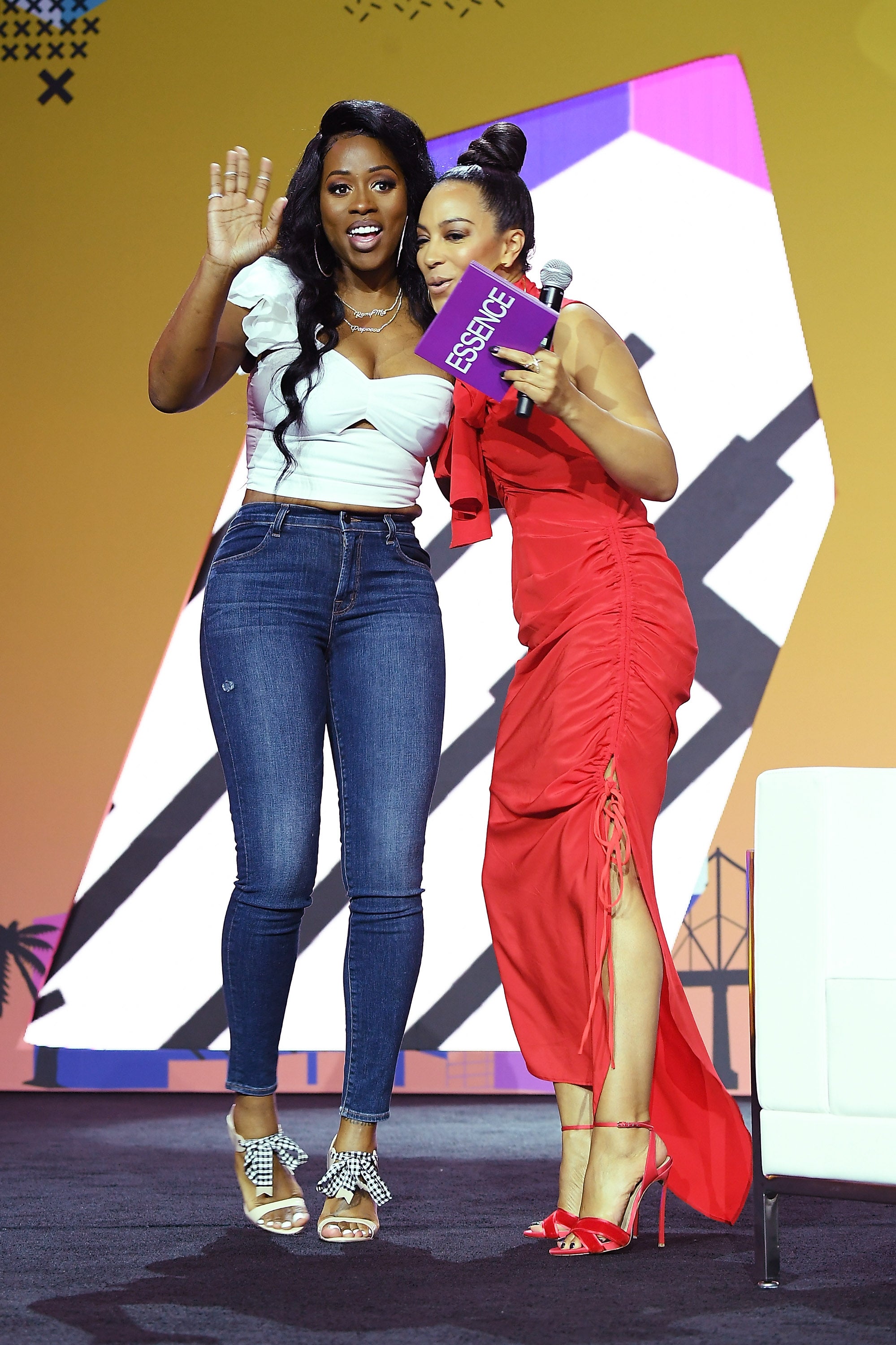 Angela Rye reflected on leading a declaration of solidarity with her mentor, Maxine Waters, days after the congresswoman was condemned by political leaders for her critique on the President Trump’s take on immigration. During a rally, Waters passionately called for protesters to “push back” on the administration’s zero-tolerance policy that has resulted in the separation of families at the U.S. Mexico border. In true ride-or-die fashion during the ESSENCE Festival panel discussion, Rye called out the  White House, locked hands with the panelists and motivated the crowd to loudly affirm, “I stand with Maxine.”

Waters responded by sharing her optimism for the future, thanks to the fiery spirit of young Black women who aren’t afraid to stand up for change.

“Black women are leading the way all over the country,” she proudly noted.

Keeping the conversation flowing, Remy Ma dished out more details on her pregnancy announcement, renewing her vows with Papoose on their 10th anniversary, and hinted that her upcoming album, 7 Winters and 6 Summers, is set to release later this year. She glowed as she discussed her journey of growth and how she believes in using her platform to make genuine and sustainable change, rather than searching for clout.

“We have to stay on the path. It’s not just for a tweet, it’s not just for an IG post,” she said. “I know so many artists say ‘I’m not a role model’, but you end up being that, having so many people look up to you. I think as artists, that is our responsibility.” 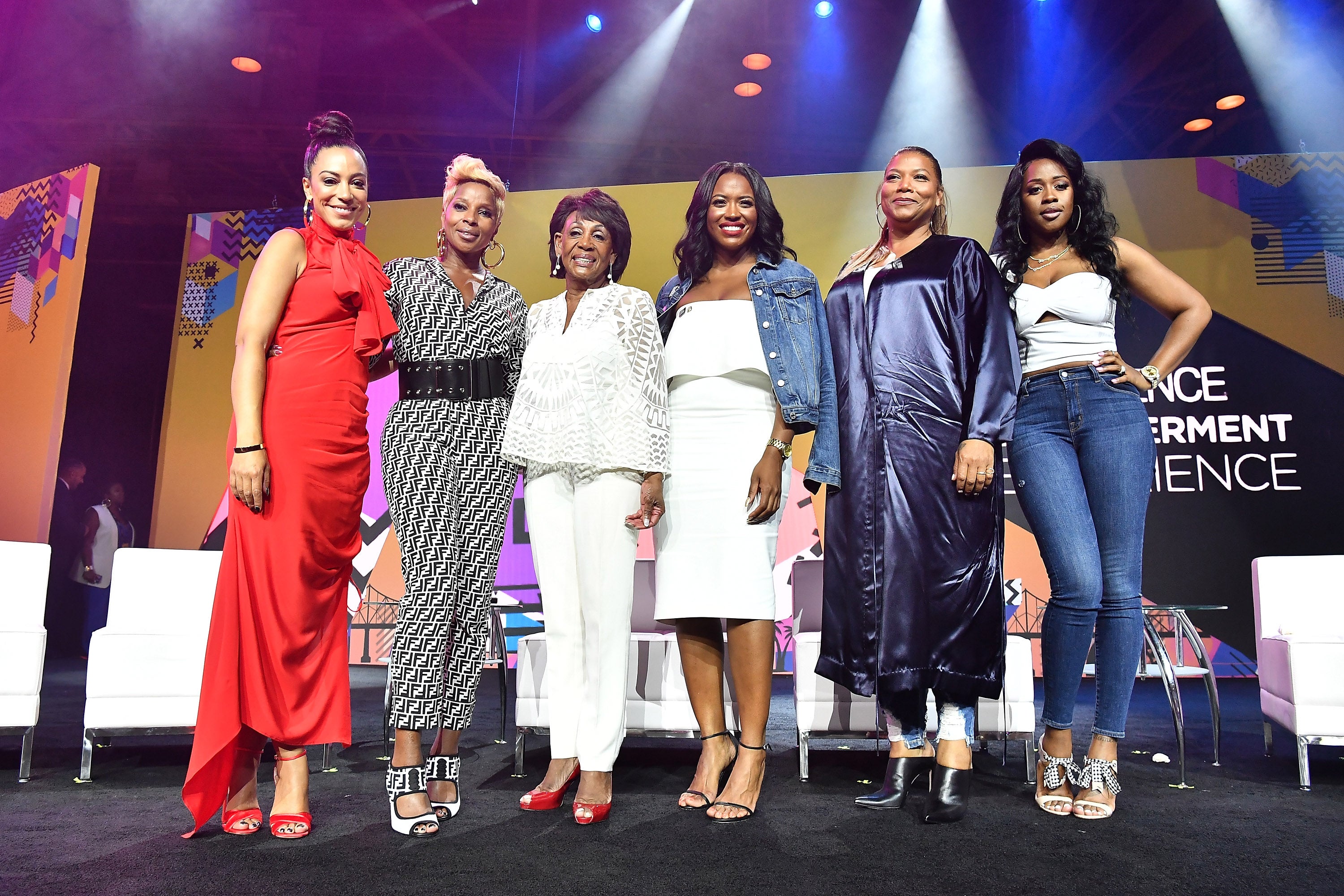 Echoing Remy’s sentiments, Alencia Johnson emphasized political awareness and the ways her role with Planned Parenthood allows her to advocate for Black women’s rights on a daily basis. “I really want Black women in here to be invested into what’s happening in our ability to access healthcare. Stand with us, this Supreme Court nomination is really going to affect not only healthcare, but immigration and our brothers and sisters in prison. Join this fight.”

As a testament to the strength of black women, Latifah added, “That’s what this Essence Fest is all about. We are such aspirational people. You can’t hold us down. You cannot hold us back. You can’t rob our culture, because guess what? We got more where that came from.”

For more on everything you missed at the 2018 ESSENCE Festival, visit ESSENCE.com.