ESSENCE FEST headliner Kendrick Lamar is a fan of his fans.  Like most artists who take their work seriously, the Compton native and new school hip hop leader pays close attention to those who study his work with the same amount of passion he uses to create.

After he released his critically acclaimed sophomore album, To Pimp A Butterfly, an English teacher named Brian Mooney at High Tech High School in North Bergen, New Jersey fused Lamar’s lyrics into a lecture he developed to teach his students about Toni Morrison’s novel, “The Bluest Eye.”  Eventually the teacher, we wish we all had, converted his class lecture into a blog and Kendrick himself took note after the online content was shared on Facebook over 10,000 times.

The day after he hit the stage at HOT 97’s Summer Jam concert, the ESSENCE FEST performer stayed in New Jersey to make the week of some very lucky freshman students.  Not only did he sit in on a lecture of Mr. Mooney’s class, according to The New York Times, the 27-year-old artist also stayed to hear several of the students perform rap and spoken word inspired by his album.  After watching, he said, “Man, this is a blast. I can see the energy. I can feel the energy.” 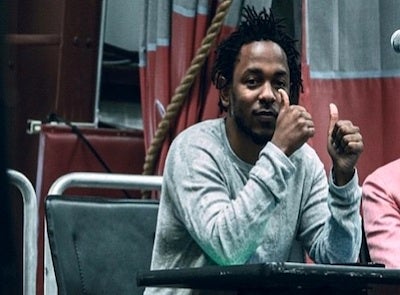 Lamar then sat on a panel with several teachers and Mooney to critique more student work in front of a 650-count student body.  While on a press run for his album, Kendrick often spoke on the inspiration for his music being kids and inmates.  According to what he told NYT, his mind hasn’t changed.

“When I talk to kids, I’m really listening,” he revealed. “When I do that, we have a little bit of a bigger connection than me being Kendrick Lamar and you being a student. It’s almost like we’re friends. Because a friend listens.”

Watch a clips of Kendrick performing his hit “Alright,” below.