One of the major focuses of ESSENCE Fest 2015 is your health. During our Empower U sessions, various leaders in the arenas of health and fitness, like Shaun T and Dr. Cheruba Parker, will teach audiences about how to live a longer, happier life by giving tips on how to correctly take care of you.

Among our celebrity panelists, we have real life community heroes speaking at the ESSENCE Empower U sessions to emphasize what people dealing with various health issues in their daily lives truly need. One of those heroes is Tanika Gray Valbrun, who fought a long, hard fight with fibroids.  Just after she underwent emergency surgery to remove over 25 of them from her body, she founded The White Dress Project to empower women like her to create a community of women who could uplift each other while battling the often-silenced disease. With the help of her supportive mother and husband, Tanika has been able to recover with enough strength to be an advocate for other women who share her story around the world.

In just over six months, the internationally known non-profit has been able to influence over 10,000 women in 41 countries—with eight different dialects—to form an alliance of women who are determined to be there for each other and make the rest of the world aware of their once hidden struggles.

To learn more about fibroids, her motivation to start The White Dress Project and the value of celebrity support, we spoke to ESSENCE Empower U speaker, Tanika Gray Valbrun.

ESSENCE: Tell us all about how the White Dress Project came to life.

The reason I [created] The White Dress Project is very personal. My mother had fibroids and due to complications with her fibroids, she lost TWO sets of twins. I was the only one of her children who survived, so it was very important to me to have a voice for the millions of women who have suffered the same way my mother did. I also have had a challenging fight with fibroids. I have suffered with excessive bleeding, abdominal bloating and cramping for much of my life. In July 2013, I underwent an emergency abdominal myomectomy and had 27 fibroids removed. After enduring a challenging recovery and realizing that there weren’t many advocacy groups, I decided that I wanted to do something to raise awareness, so I did, by starting The White Dress Project.

ESSENCE: What is the main reason why you started this initiative?

Research shows that by age 50, 70% of white women and 80% of black women are diagnosed with uterine fibroids. A large number of these women have no symptoms, but many women in their 30s and 40s do. Often times, these women suffer in silence with symptoms like: heavy bleeding, fatigue, problems conceiving, difficult pregnancies, anemia, frequent urination, painful sex, and back pain.

Uterine Fibroid tumors are estimated to cost a maximum of $34 billion dollars annually, as a result of lost work days, treatments, and sometimes pregnancy complications. The main reason I started this initiative was to LIFT MY VOICE and build a community of women with fibroids, who can support each other. There are so many women suffering with this epidemic. Rarely can you bring up the topic and a woman not have some familiarity with the issue. Whether it’s her mother, aunt, sister or she suffers with it personally.  I believe it’s time for our government, influencers and policy makers to speak about this issue and allocate the funding needed to enhance research, educate more women on their options and find a cure.

ESSENCE: What did you do to gain the confidence you have now since recovering from surgery and living with the disease?

ESSENCE: Why is the concept of a white dress so important?

The White Dress is so important because it serves as a symbol of empowerment. WE CAN WEAR WHITE! The White Dress Project name plays on the fact that women with fibroids often steer clear of light colored clothing during their menstrual cycle because of extremely heavy bleeding and bloating.

ESSENCE: Do you think watching women like Cynthia Bailey on television deal with fibroids has made the public more aware?

Absolutely! I applaud women like Cynthia Bailey, who decided it was important enough to share her personal experiences with fibroids. I am so proud to share the stage with her at the EMPOWER U session, and I definitely feel women like Cynthia have brought more public awareness to the fibroid condition. I believe if more celebrity women and even the men in their lives who deal with it were to speak publicly about the issue, we could begin to have these conversations we need on a national level and bring the awareness that is needed to allocate funding for more research. 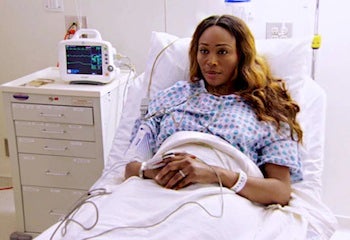 ESSENCE: What’s one quote you live by that you believe will help women through their own struggles?

“Stand for something or you’ll fall for anything.” One of my all-time favorite quotes; as simple as it may be- it has been a guide for me throughout most of my life. My mother shared it with me at a very young age, I assume to ward off the bad influences that can come along as a teenage girl – but it always reminded me that –it’s either one or the other; you’re either standing in your truth or you’re not.  As women, it is imperative that we stand up for our health. We are the bearer of generations, we are resilient, resourceful and tenacious and flexible. We are so much more powerful than sometimes we are portrayed in the media and treated in the workplace but our health is in OUR control. There are measures that we can take to live a healthy lifestyle.  It’s my belief, that when you are diagnosed with fibroids, you can STAND UP for your health, by investigating treatment options and researching doctors who are more familiar with dealing with fibroids. Most importantly, becoming IN TUNE and AWARE of your body and knowing when something doesn’t seem right – it’s time to go to the doctor.

ESSENCE: In 5 years, what will The White Dress Project have accomplished?

In five years, through our advocacy we WILL have federal legislation recognizing fibroids globally as a women’s reproductive issue. We will be on our fifth year of our empowerment tour, which encourages women to advocate for legislation in their home states. We will be celebrating our fifth year of the White Dress Gala honoring those who are doing significant work to raise the awareness about fibroids. We will partner with fashion designers to have our own signature white dress and possibly a line of sanitary products to better serve women who suffer from extremely heavy bleeding.  We would have been able to fully fund clinical trials, and research groups partnering with Georgia Medical College, Meharry Medical College, Cleveland Clinic, and Bingham’s Women’s Hospital. We would have also built strong relationships with The National Institutes of Health and the Office of Women’s Health and built a global organization known for all of our efforts to raise the awareness of fibroids. We’ve got a lot of work to do, but I’m confident we can get it done.

ESSENCE: How can people support your mission and stay in touch?

We can definitely be reached on all our social media sites:

We are a non-profit 501 (C)3 and we need money! In August of this year, we will host our first White Dress Gala. Please consider making a donation of $34 for the $34 billion dollars spent annually because of fibroids, or $80 for the 80% of women who will suffer with fibroids by the time they are 50. Or just give because you believe in the cost and you know that research is needed. Our PayPal is: wecanwearwhite@gmail.com

Want to attend Tanika Gray Valbrun’s workshop at this year’s ESSENCE Empower U? Sign up now to reserve your spot!

Click here to see the rest of our Empower U line-up!