It was 2003 and Ashanti was riding high off of the success from her debut self-titled album, Ashanti. We here at ESSENCE were gearing up for our annual ESSENCE Festival and wanted to put together an all-star line up to honor one of music’s best vocalists, Luther Vandross. To tribute the “Never Too Much” singer, we invited newcomers to join seasoned artists. Ashanti graced the stage with Usher, Patti LaBelle, Faith Evans, Gerald Levert, Ron Isley and Kelly Price. To say the tribute was amazing would be an understatement. 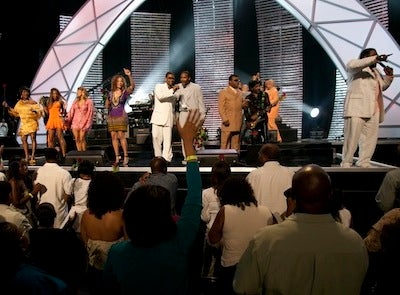 R&B music legend Luther Vandross was originally scheduled to perform during the 2003 ESSENCE Festival, but when a sudden stroke that landed him in a coma for months derailed his appearance, some of the biggest names in music united to honor him with an all-star musical tribute that was second to none.

We caught up with the singer-songwriter, who just released her fifth solo album Braveheart, and asked her to reminsce on what it was like to sing alongside iconic entertainers to pay tribute to an iconic artist.

“I felt like it was an honor to be a apart of such an amazing tribute to such an iconic and legendary artist like Luther. The song I sang was everybody’s jam. I remember during rehersals, my band would even sing along. Then when I performed during the show, I think I went on right before Usher. Me and Usher were standing on the side of the stage and it was just a great reaction. Everyone was there. Luther was there and in good spirits. I was also able to sing one of my songs a capella from my album called “Thank You” and I incorporated saying thank you to Luther for inspiring young artists like myself. It just felt great to pay homage.”