My All-Expense Paid Trip to Essence Fest Was Amazing - Essence

In 2012, Jonetta Knight wanted to go to the Essence festival badly. Strapped for cash, she decided to try her luck by applying to win an all-expense paid trip for her and two friends in a contest sponsored by State Farm, a package which also included a style makeover and a $500 prize. She did, and the rest is history, and a really cool story.

Take us back to the very moment when you found out you won.

Jonetta Knight: I received a phone call from an Essence representative late on a Friday afternoon. She let me know that I won the contest and that she would contact me later with more details. She said she just wanted to make my weekend by giving me the good news on a Friday. I thought that was cool.

I was excited and also relieved. I really wanted to attend the festival, but because of my financial situation at the time, I wasn’t sure that I would be able to afford it. My girlfriends had already planned to go without me. I was recently unemployed and had just starting working again for a consulting firm. So at the last minute, I tried to put together plans to go. When I received the phone call that I won, I was so thankful. I felt like it was God’s way of telling me that He was still with me.

How on earth did you pick which two friends you’d bring along? Did you upset some people?

Jonetta Knight: Initially, I wanted to fly two of my girlfriends who had already planned their trip to the festival. But they already had commitments to the group of women they initially planned to travel with, so that didn’t work out. So, I picked another girlfriend and a cousin of mine to accompany me. I was awarded two hotel rooms, one for myself and one for my guests. I roomed with my two guests and let my other girlfriends have the other room so they didn’t have to come out of the pocket for a hotel.

Jonetta Knight: As a part of my prize, I received a style consultation with a fashion editor at Essence. 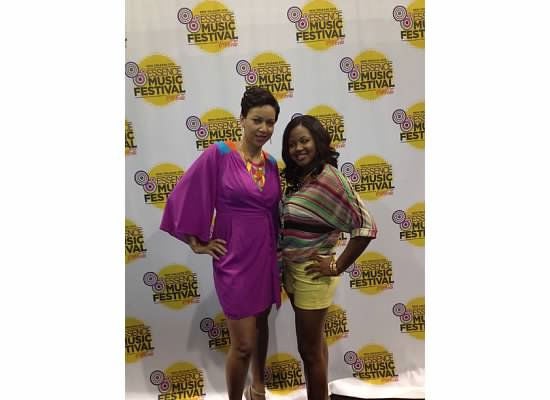 The consultation took place at a local boutique in New Orleans. I bought the dress, blazer, necklace, and shoes that the advisor pulled for me and I used the remaining prize to buy dinner for my girlfriend and I.

Did you meet any celebrities?

Jonetta Knight: I met Free and Michelle Williams backstage in the convention center during the fashion show. I remember Michelle taking the time to compliment me on my necklace.

Overall, what was your favorite memory from that experience?

Jonetta Knight: My favorite memory was the “big reveal” after my makeover. The reveal consisted of a short segment on a stage in the convention center. The fashion editor, Celia Smith, gave me a wonderful introduction. Then, I came out and answered a few questions before I hit the runway. It was an awesome experience. I also had great seats every night at the concerts!