Original piece written by Valerie Eguavoen of On A Curve

I had planned to start the New Year off with a styling segment on the blog, but it looks like the universe/internet had other plans. I am a 26 year old black woman, a Nigerian-American, a Howard law graduate, a plus size blogger, and a Durham, North Carolina resident. While I have built a small network of individuals through my blog and social media platforms, never in a million years would I have thought that someone like me would throw a wrench into the fashion “system.”

It all started with the ongoing Revolve press trip to Phuket, Thailand. Until yesterday, I followed a few of the influencers that were invited on the trip, like Aimee Song and Camila Coelho. I have to admit that I was a huge fan of Aimee’s blog, that is until her page led me to Revolve’s Instagram feed. I had noticed Revolve’s usual practice of discrimination a while back, but something about this particular post struck a chord. After you finish reading this post, you may or may not find it shocking that they are still currently engaged in heavy social media coverage of the trip.

So, let’s rewind to yesterday. I came across the image and caption below, and I was immediately disturbed by the blatant exclusion of darker skinned women, and the ridiculous addition of rap lyrics to the caption. I commented to myself about how crazy it was, and was planning to send it only to a couple of friends. 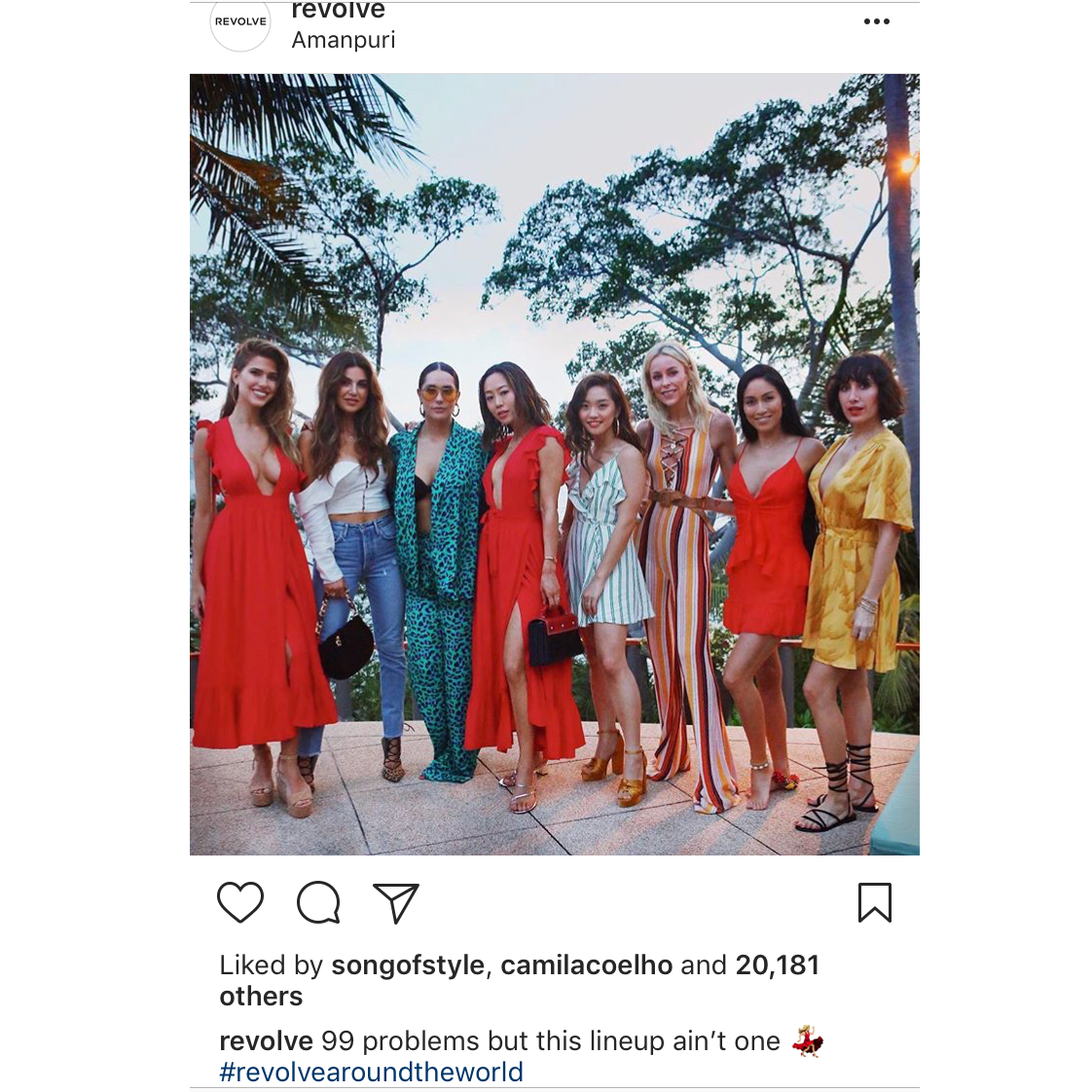 Let’s be honest here, I was not shocked to see the row of bronzed skinny women on their feed. After all, it is very common practice in the fashion industry to only include girls who meet oppressive European standards of beauty. However, just a few weeks ago, I was having a conversation with a fellow blogger, @simioa, about the consistent exclusion of talented black women from the top influencer tier and how we have to work 10 times as hard to get the same number of collaborations and amount of money. 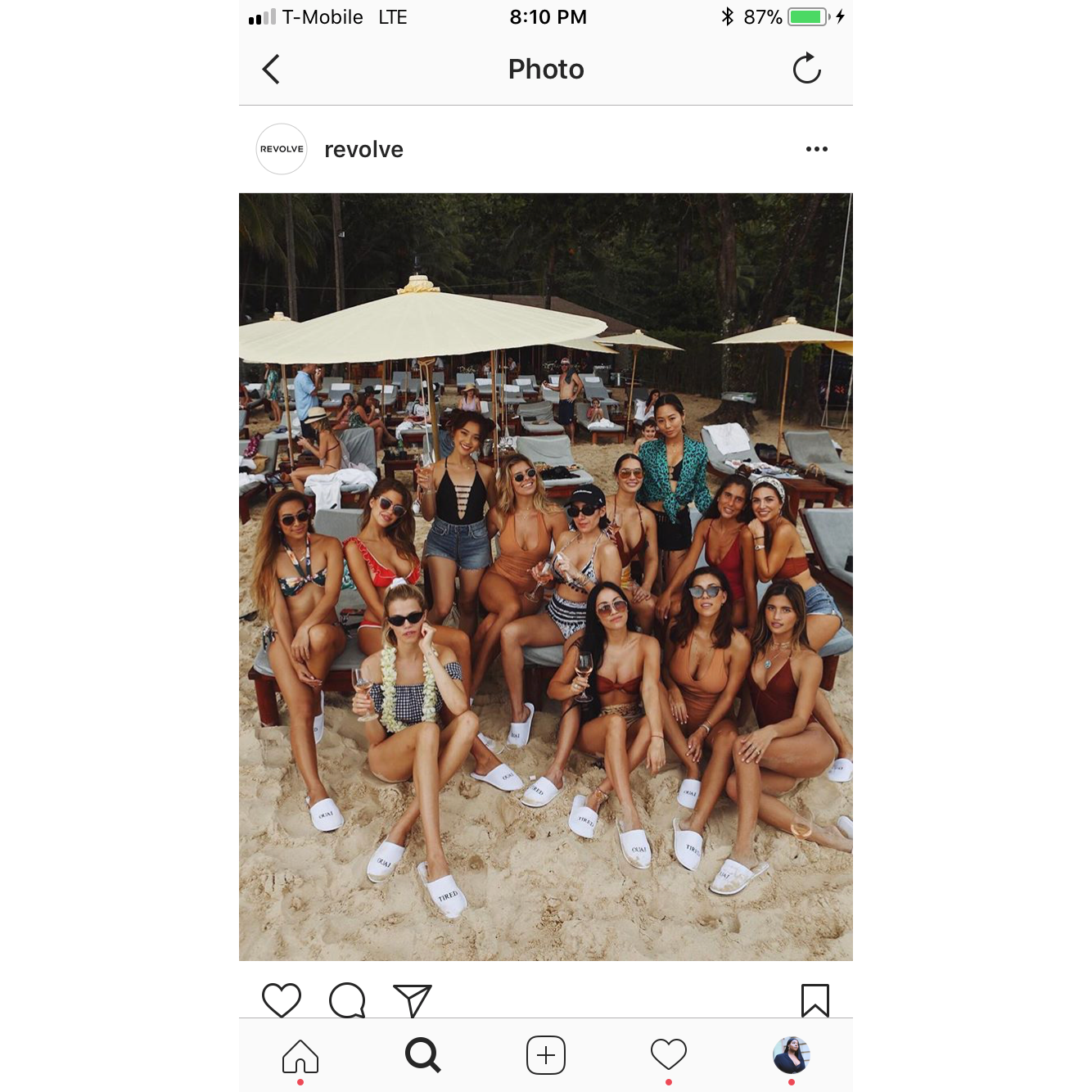 This time, I had had enough of the crap, so I decided to share my opinions with my platform of 10K followers. I had addressed racial justice issues on there before, but nothing relating specifically to the fashion industry. To be honest, I felt like I had nothing to lose but the constant lack of considerations from many brands and fashion houses. As @fumitoronto plainly put it, “Staying silent to not f**k up the deal you’re probably never going to get because no one says anything, does nothing. If you have a platform, do what you can!”

So I said something: 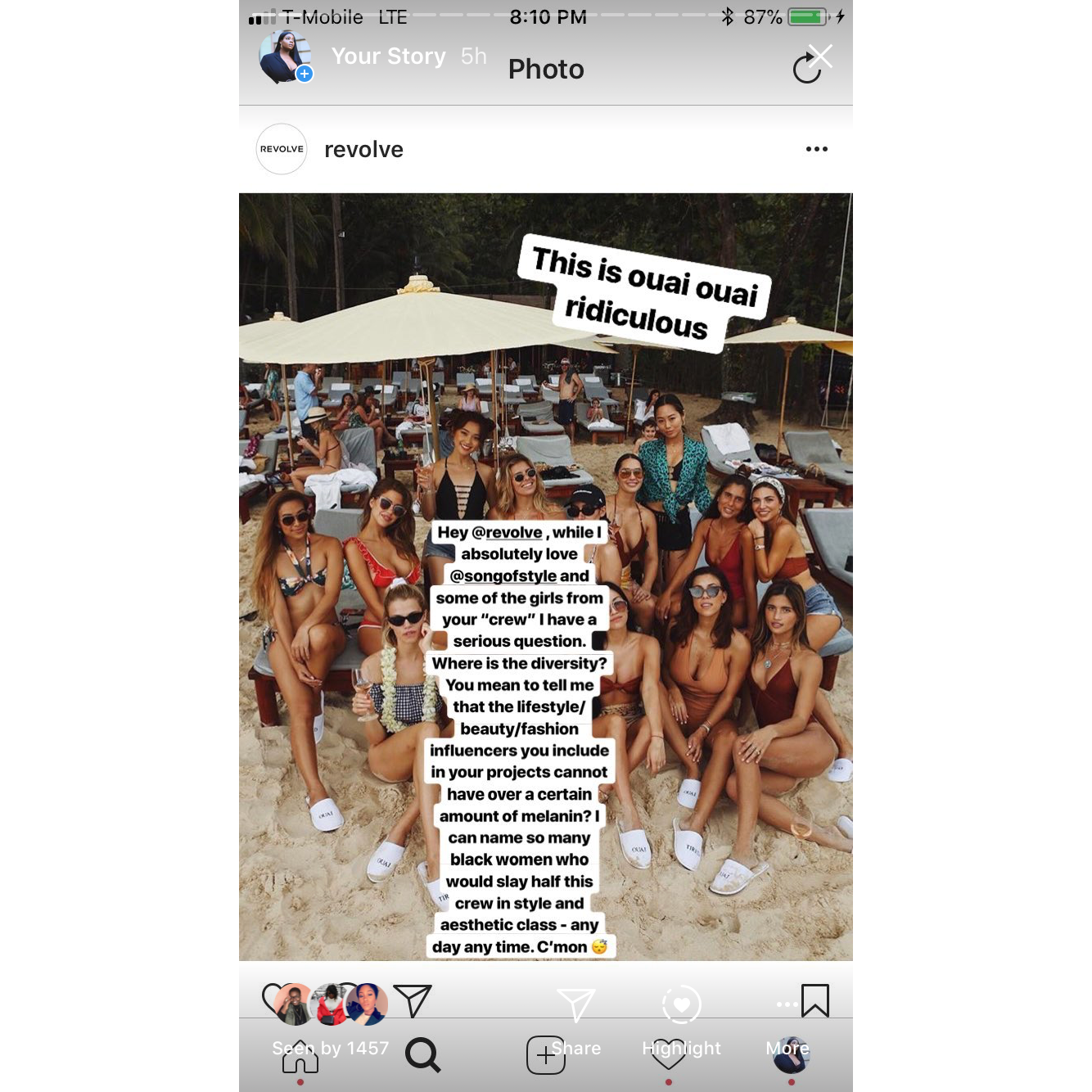 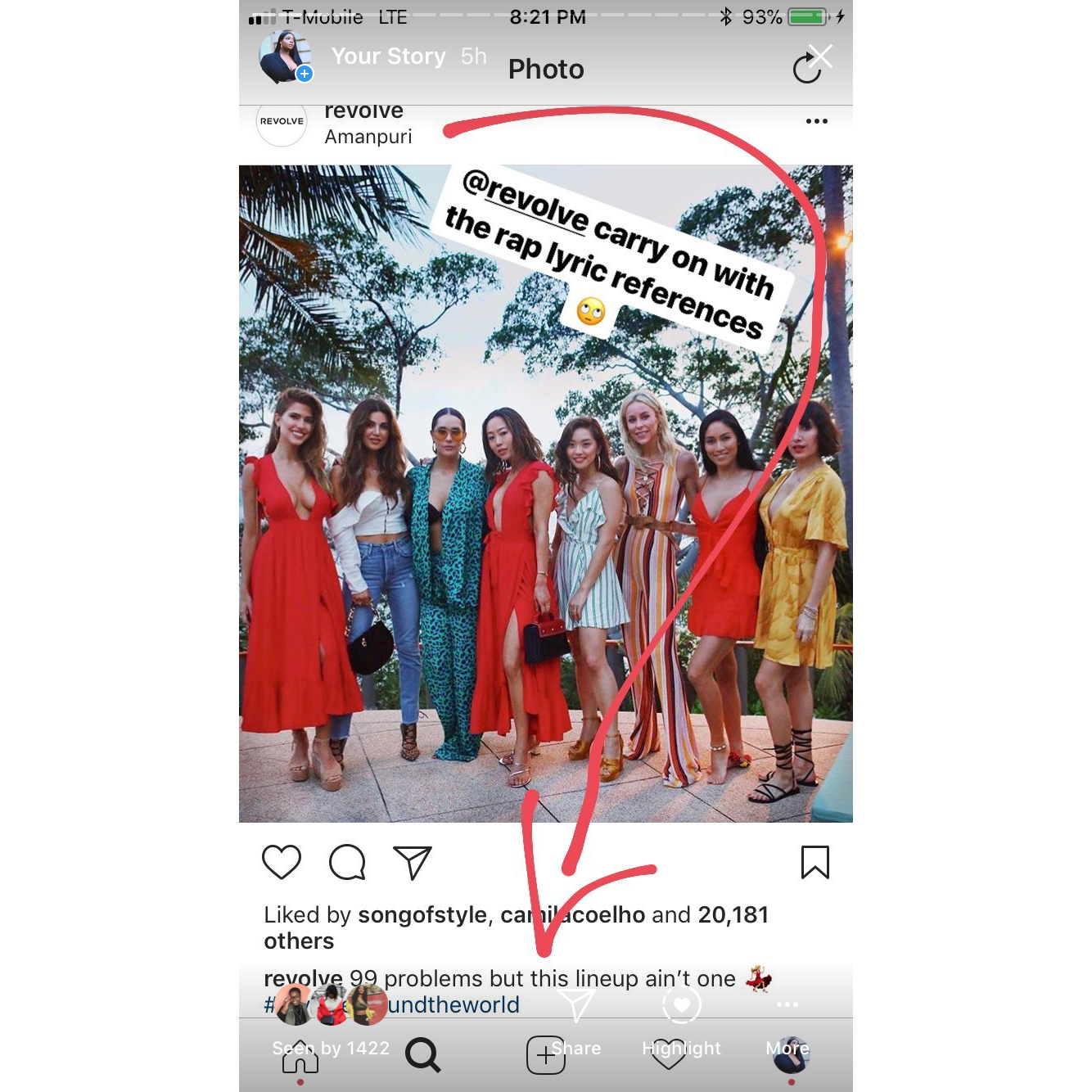 Most of you are probably familiar with @diet_prada, which has been described by manrepeller.com as a “no-mercy Instagram handle that calls out injustices in the fashion industry.” Well, I thought it would be a good idea to share my post with him to raise awareness. Honestly, I thought he would read it, agree, and maybe call them out separately on his page. Well…he read it, responded, and then reposted my story and tagged me in big bold red-highlighted letters. The rest is history. 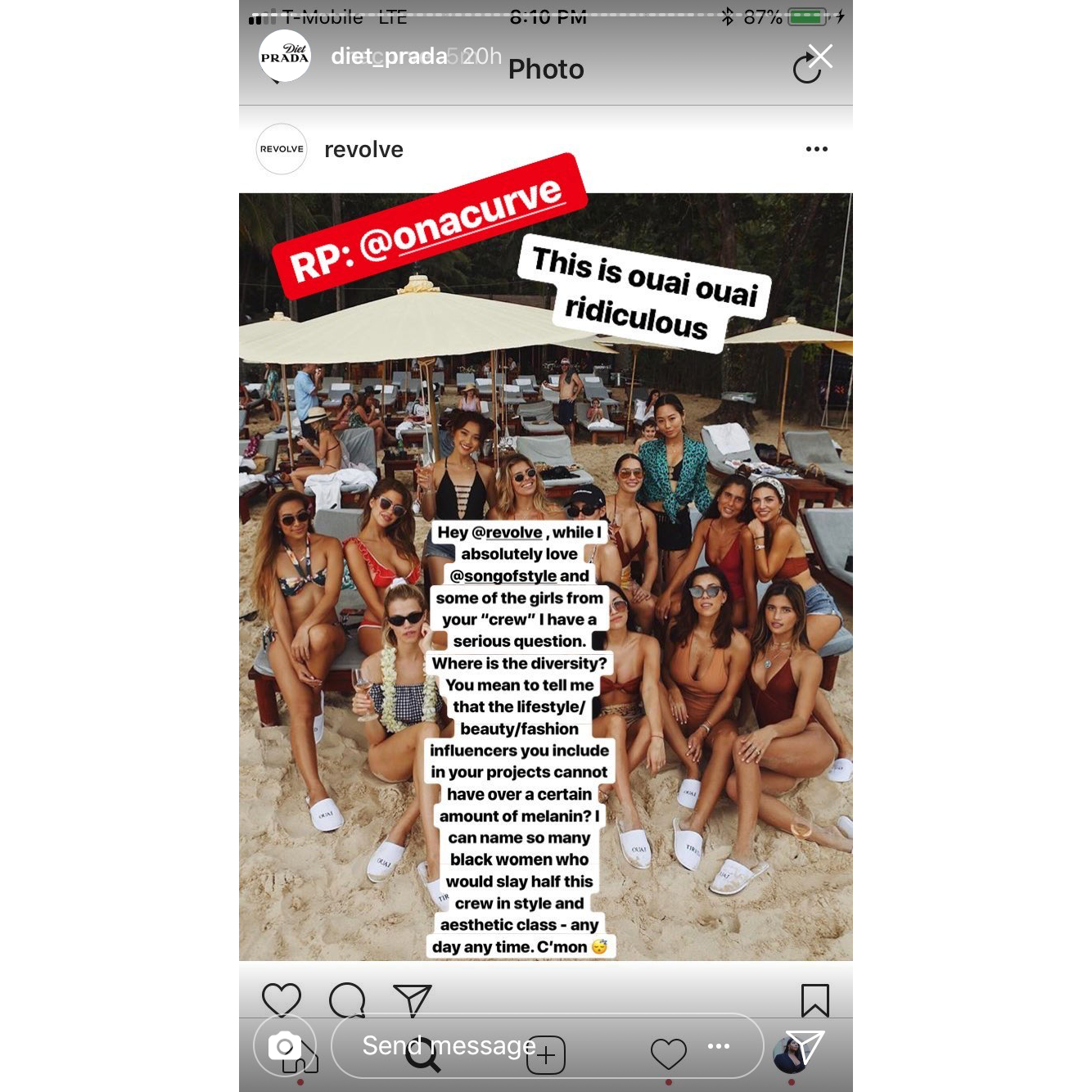 Despite the overwhelming support I have received on Instagram, I have to say that I am not a pioneer. Hundreds of black women and other women of color express their frustrations on this topic every single day – through the comment sections, on their platforms, and through emails and DM’s to the brands themselves. Our voices are out there, but they are not being heard. That is, until today.

Revolve has still not responded to my posts, but I’m pretty certain they have seen my posts and the responses. To my surprise, Aimee (with over 4 million followers) responded to me, and her words were very disappointing. Read her response below: 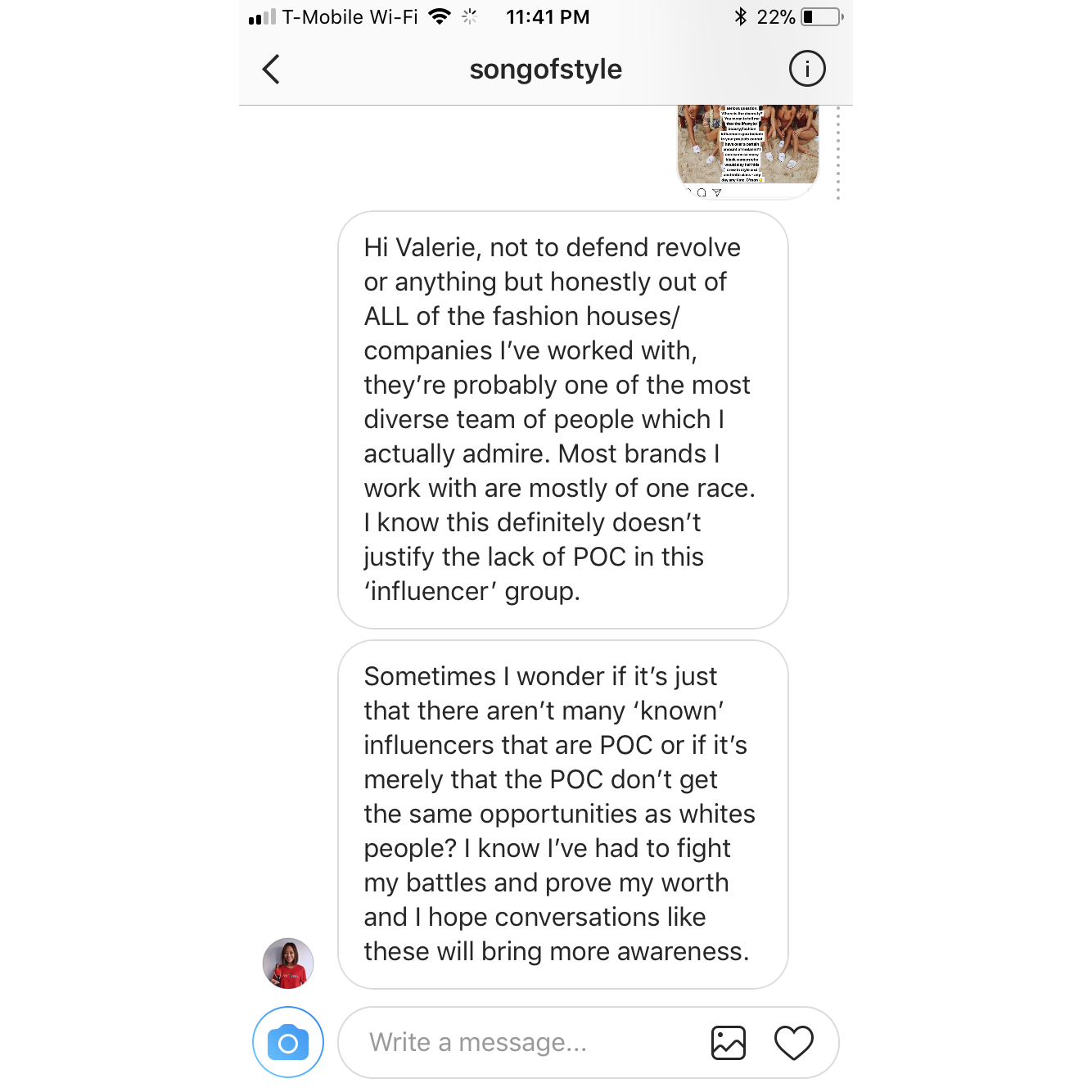 Aimee is a woman of color herself, and while I have never known her to speak on the issue of skin color discrimination in particular, I had recognized that she had been outspoken on other social issues in the past. It was surprising that her response was plagued with privilege and an inability to speak truth to the forces of power at play here (Revolve). I do not doubt that Aimee has worked hard to build her career, but her response skirted around very problematic issues of race, and attempted to defend Revolve without inquiring about their practices. The words flowed out and before I knew it, I was challenging one of the biggest influencers of our generation. I had a responsibility to educate her and the millions of women who shared her views. My response is below: 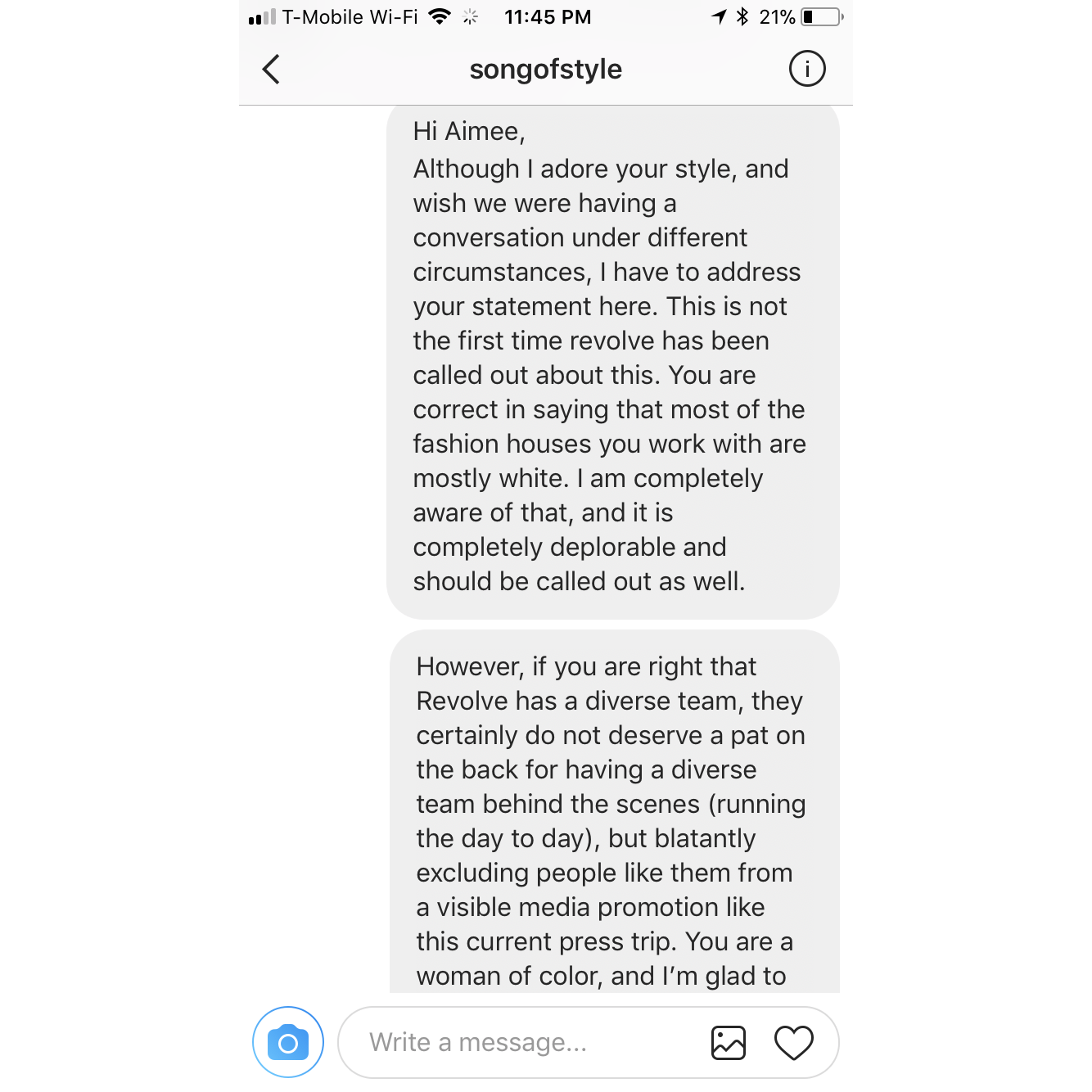 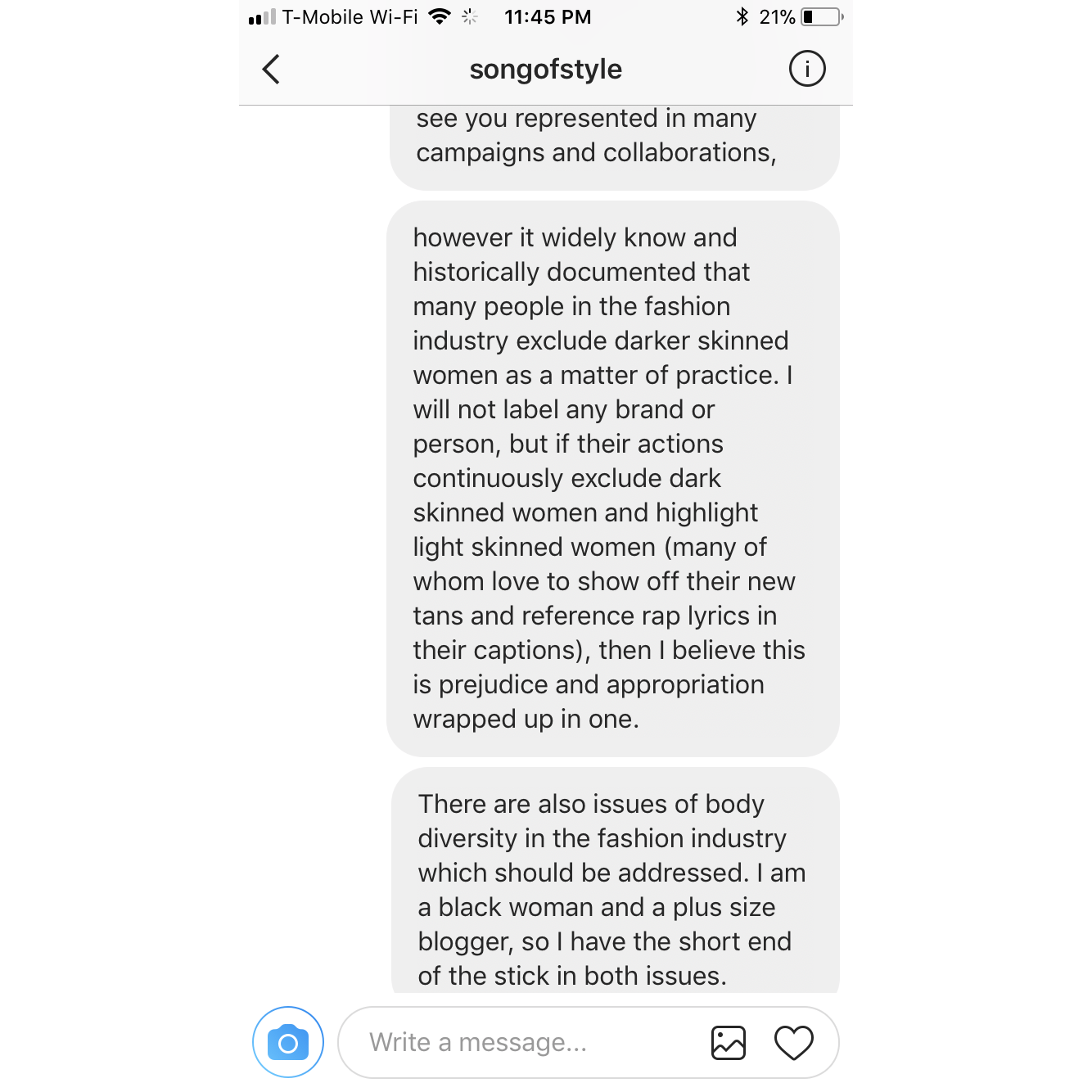 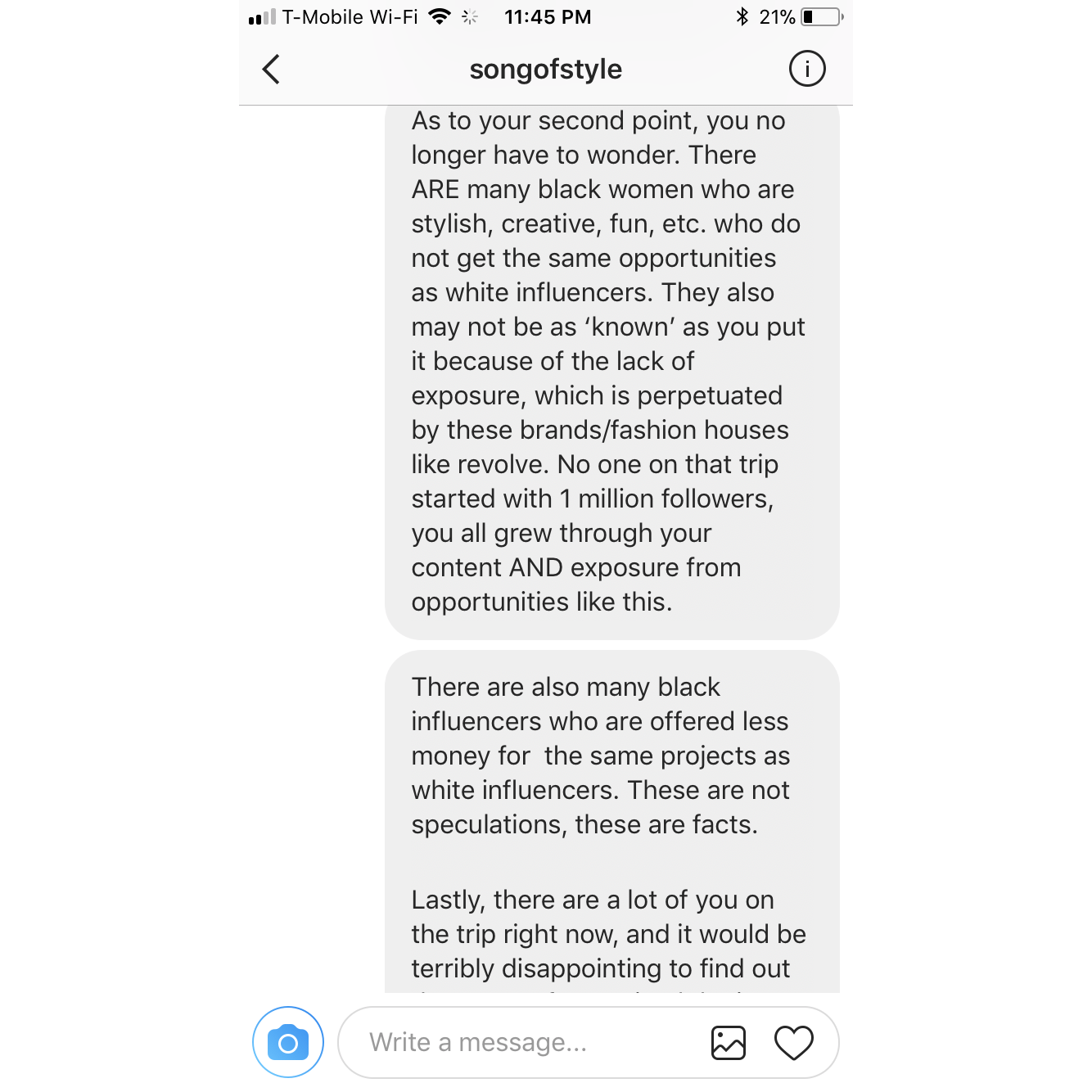 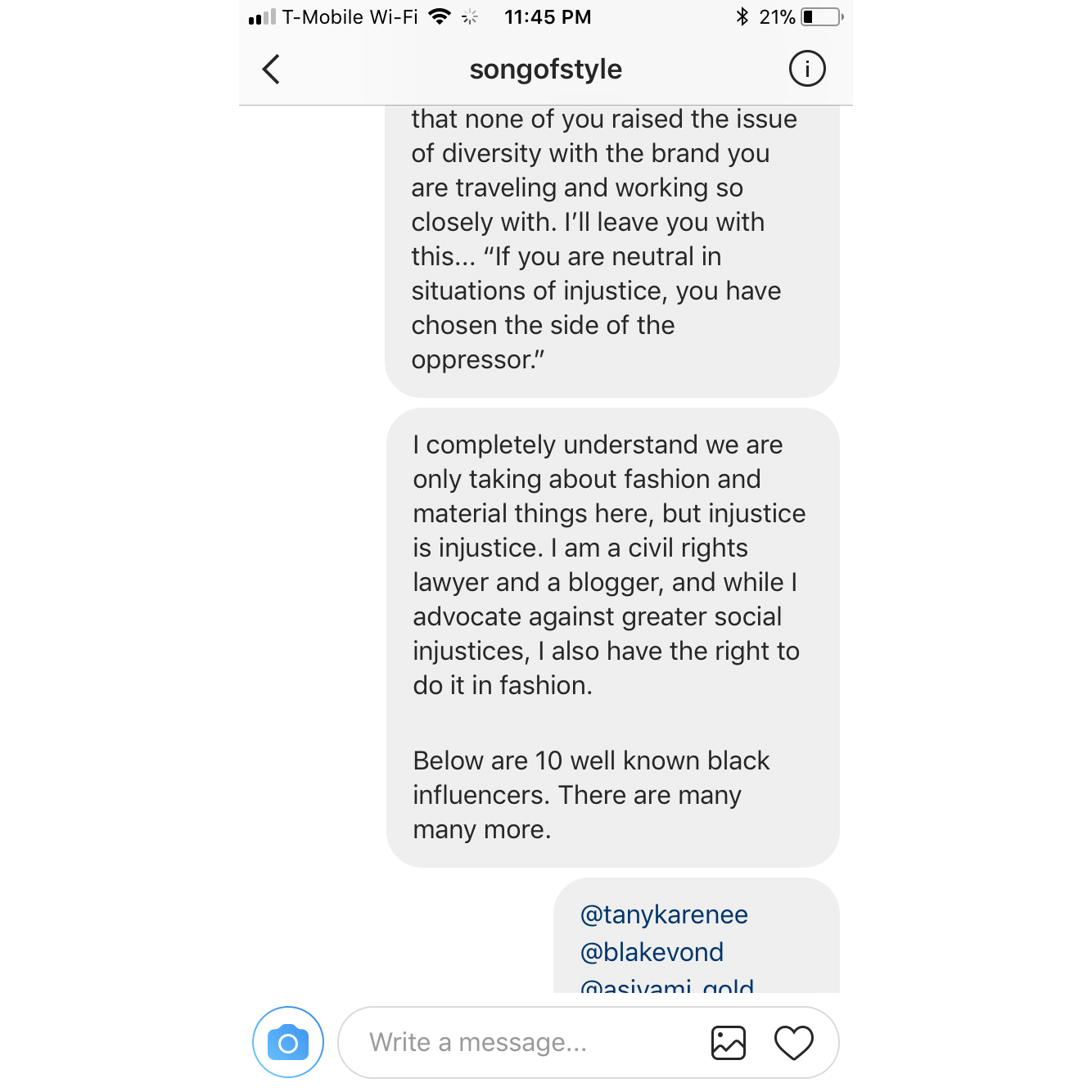 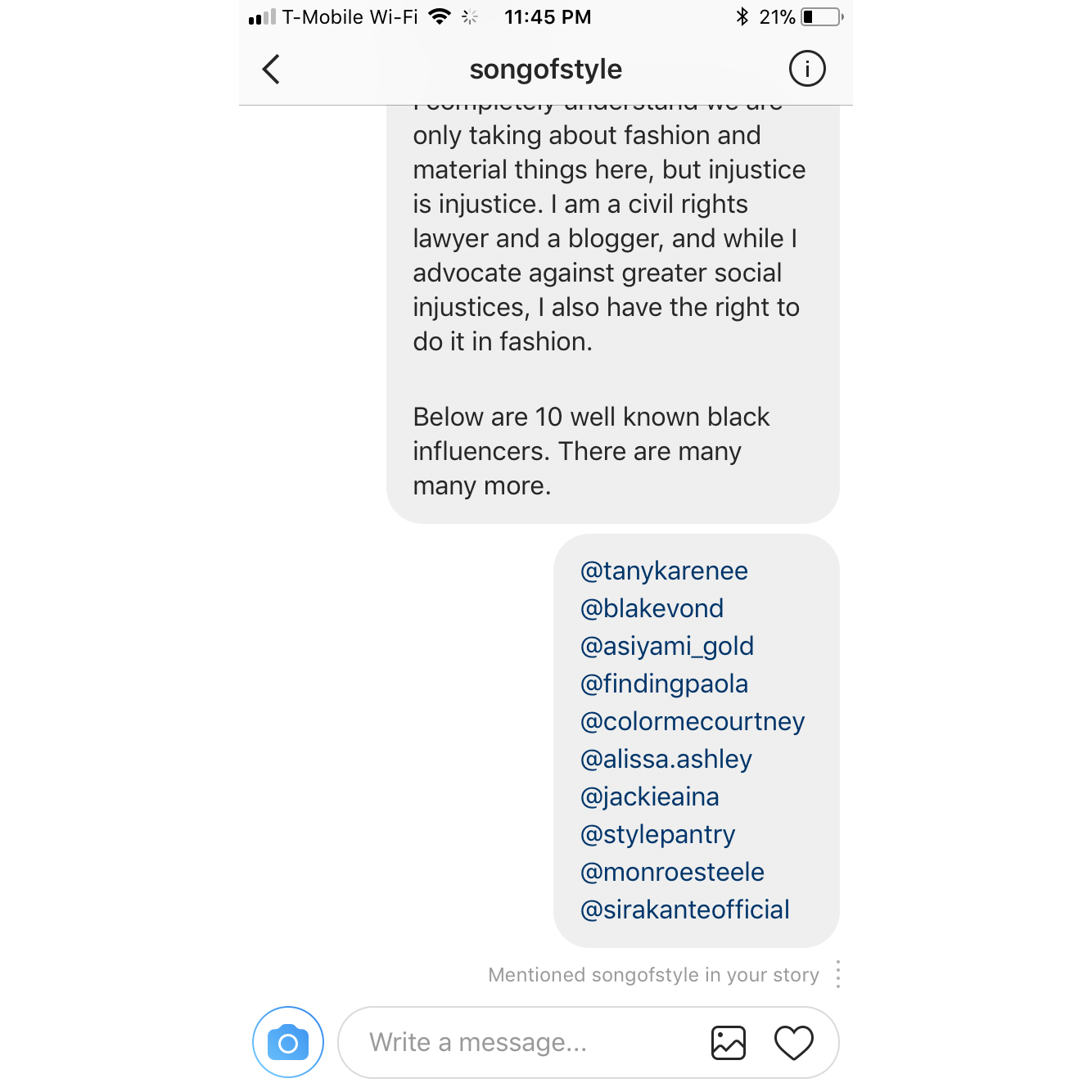 The last few hours have been so overwhelming, but much needed. My goal was only to speak the truth, and the truth is that influencers of color, who do not fit into the oppressive European standard of beauty are consistently overlooked, underrated and underpaid. This is unacceptable. To underscore that point, prejudice is one thing, but bad business is another, as @blakevond puts it: “Not only is this culturally exclusive and on the wrong side of history, it is bad economics! Black women spend more money in the fashion sector than any demographic. It would behoove you, and your bottom-line, to pay us some damn attention! But the fact that they are willing to leave billions of dollars on the table year after year tells you, it’s not about money… it’s about a MESSAGE.”
The outpour of support and solidarity has been incredible. There is a movement of people from many different cultures and backgrounds who refuse to accept the normality of discrimination in the fashion industry.

Read some of their responses below: 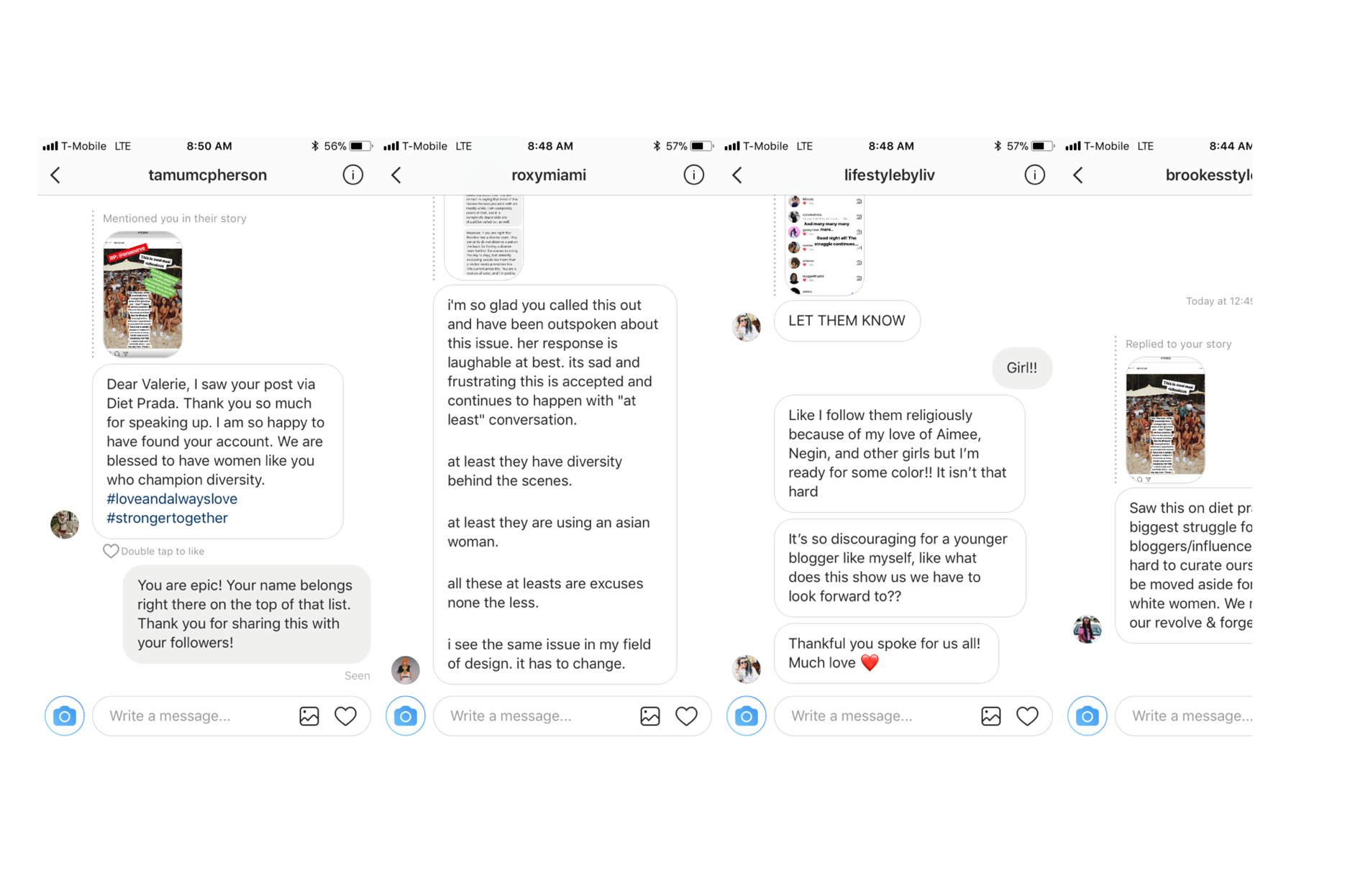 There are hundreds and hundreds of messages like this in my inbox and I wish I could post them all here. I found myself responding, through last night and this morning, to many people who I have admired for a very long time on Instagram, to people who are ridiculously talented, and who BELONG on that list I sent to Aimee. I have decided to start an Instagram page dedicated to highlighting influencers who are content creators, and who work hard to produce content, but are consistently overlooked because of the color of their skin, their ethnicity, their religion, their gender, their size. Follow the page @YOUBELONGNOW AND #YOUBELONGNOW. You can do your part by spreading awareness and recommending these talented human beings to youbelongnow@gmail.com.

Visit On A Curve for more insightful words and inspiration