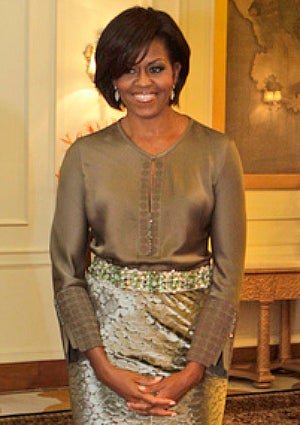 Vogue Magazine’s “Best Dressed List” is coming out soon, and not surprisingly, Michelle Obama made the list. The January issue will feature Vogue’s picks for the top stylish women on the international fashion scene. When asked why they chose Michelle Obama, Vogue magazine wrote, “When she met The Queen she wore an outfit that referred back to Elizabeth I. There’s thought that’s put into everything. She really, truly is the individual.” Mrs Obama was selected because there is “no better example of fashion democracy,” Vogue says. “What she has done is so wonderful in that there’s a spotlight on her and she’s opened up the vocabulary…She mixes high and low, she mixes J. Crew with Gaultier. It’s that pairing of something not so expensive with something that’s a little higher end that’s worth celebrating.” Model Liya Kibede and New York City socialite Shala Monroque also made the list.