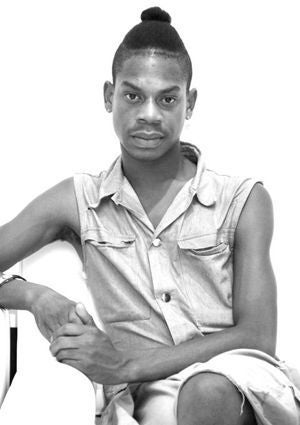 It’s fifteen minutes into our conversation and Telfar is calm, cool and collected. This would be unremarkable except the New York City designer is 48 hours away from his Spring 2011 collection debut at the Harlem Front Row fashion show. The hours leading up to a show are usually adrenaline-fueled, chaotic ones that leave a designer so frazzled it’s nearly impossible to maintain a conversation. But Telfar’s unique attitude is to be expected; it mirrors the unique perspective he’s pioneered as a designer over the last five years. At just twenty-five years old, the Queens-born, Liberian-raised designer has gained quiet acclaim from fashion insiders for functional, avant garde pieces that amuse as much as they amaze. From his studio, we touched base to talk about his career thus far, reaching the masses and underwear as the new outerwear. ESSENCE.com: How far along are you with your collection for Harlem Front Row? TELFAR: I’m done and everything is working itself out. I’m gonna have fifteen looks, but there are twenty-seven looks in total. ESSENCE.com: You are remarkably Zen… TELFAR: Everything in my control is already taken care of. I don’t like to be stressed out. I finished the collection last week and its already been on showcase. ESSENCE.com: You are so organized. What can we expect on the runway? TELFAR: This season’s a lot different. This is my first complete menswear collection — so there’s no unisex or womenswear added to it. There’s also a few accessories and I collaborated with Doc Martens to make men’s slingbacks. ESSENCE.com: Why the exclusive focus on menswear though, versus your women’s pieces in the past? TELFAR: This is actually what I’m interested in right now, fashion -wise, because I feel like that’s where fashion is lacking. ESSENCE.com: What is the Telfar man wearing for Spring 2011? TELFAR: This season is my interpretation of guys summer basic. So I didn’t necessarily change the entire look of how men dress during the spring, but it’s more like a progression. Like this season my underwear collection was inspired by my obsession with guys being able to wear boxers out of the house. So I made pieces that doubled as boxer shorts (but incorporated other elements.) One is pair is called dress-shorts because its a combination of a dress shirt fabric and shorts. ESSENCE.com: Would you say such forward pieces are the hallmark of your line? TELFAR: My pieces are very complicated and certain pieces are multi-functional, so you can turn a jacket into pants. I also have a lower t-shirt collection and I’m releasing another installation of that after this show and it’s the new underwear collection. ESSENCE.com: Why did you decide to show with Harlem Front Row, versus debuting on your own? TELFAR: They have a good mission in mind, which is trying to get younger designers (of color) on a higher platform. And whether I created twelve collections or not — I’m still considered a new designer. The context of the show was also attractive, since they have it at the Studio Museum of Harlem. I like the art they have there, so I want to be associated with them as well. ESSENCE.com: Where do you see yourself going as a designer and why do you think you are not there? TELFAR: Where I wanna be is owner of my own store. I wanna be able to create bigger collections. I have ideas for forty-five looks, I just don’t have the money. Besides that, I don’t think anything else is holding me back at all. I’m just trying to continue in the same direction I’m going and progress into bigger and better boutiques that are beneficial to younger designs. ESSENCE.com: How does the time you spent as a boy in Liberia influence your work? TELFAR:  I don’t think it would be so much different if I was from here or not. I think it’s just my own personal mind — and the environment I’m in. Most of the ideas come naturally. Things come organically. Each season I try to be on trend, but also showcase something completely different. Each season isn’t so much a departure as it is a progression from the previous season. ESSENCE.com: Did you formerly train to be a designer? TELFAR: I went to business school at Pace, but the entire time I was at Pace I was designing. I was designing all through high school I never want to school for design and I never needed to. ESSENCE.com: So then how does your design process work? TELFAR: I design on my own. Nothing is designed by committee. Most of the time, I would make mock-ups of things and they are able to figure it out. Because that’s what I used to do, I would reconstruct vintage clothes and sell them in the lower east side. You could see certain things, but I would use t-shirts — like millions just to make a sweat shirt.  ESSENCE.com: You’ve built a solid career so far. Are your parents proud? TELFAR: I hope so. I always have done whatever I wanted to do — my mom was here this whole week helping me with the installation and stuff. I guess there’s nothing that anyone can say to deter me. I don’t have anything right now. I’m still doing it. Season after season. ESSENCE.com: Tell us about your upcoming online store which launches at the end of the month? TELFAR: By the end of the month my garments will be available for purchase at www.Telfar.net. Everything is between $20 for underwear to $400 for outerwear or pants.