By Sonaiya Kelley · Updated October 26, 2020
After a somewhat bumpy start, Kanye West debuted his Yeezy Season 4 collection for NYFW on Roosevelt Island today. Chanel Iman, Teyana Taylor, and Sofia Richie (Lionel Richie’s daughter and Justin Bieber’s new girlfriend) walked in the show, along with more than 500 amateur models who responded to ‘Ye’s open casting call requesting “multiracial models only.” The models got into formation on the perfectly manicured lawn, creating a gradient with their clothes ranging from white to beige to army green to black. But that was nothing compared to all of the fierce beauty moments the models served up on the impromptu pyramid-shaped runway. The neutral palette was elevated by the gorgeous backdrop of Manhattan’s skyline and the models opted for equally pared down beauty. Teyana slayed with a slicked-back bob, false lashes and little else. Her enviable abs were on full display and her baby hairs were slicked down, letting her singular beauty shine through.

I see @TEYANATAYLOR is still refusing to take a break from her slay #YeezySeason4 pic.twitter.com/82mV1QhkCW

Chanel Iman was a vision as usual with hair parted on the right and little more than moisturizer in the way of makeup. There was all manner of natural hair from teeny weeny afros to huge textured curls in every color on the spectrum from blonde to pitch black.

Equally notable was the star-studded audience. Model Winnie Harlow was in attendance with shoulder-length blonde hair and dark roots. WANT MORE FROM ESSENCE? Subscribe to our daily newsletter for the latest in hair, beauty, style and celebrity news.

La La Anthony showed up in a half-up, half-down hairstyle that combined braids and curls and will definitely be in our rotation this fall (We’ll also be stealing her matchy-matchy metallic lip look). 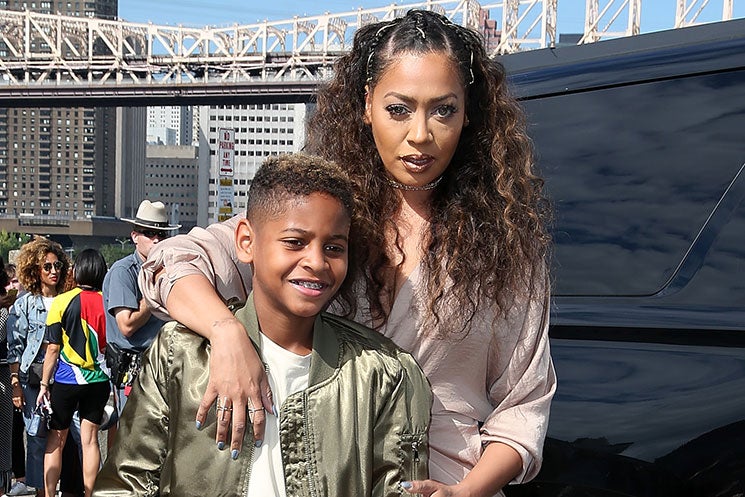 La La Anthony and her son attend the YEEZY show on September 7, 2016 in New York City.