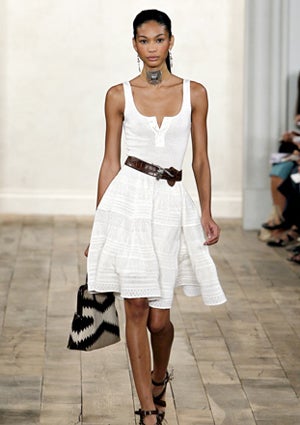 Ralph Lauren September 16, 2010 She’s going hunting? She’s going in search of ancient Aztecs by way of the Hamptons? She’s going to get married? From looking at the fifty-seven piece collection which floated down Ralph Lauren’s runway for Spring 2011, it was unclear what his woman is doing. Or why. Fringes, lace, floral patterns, and shimmery sequins -all perfectly chic elements – seemed slightly confusing when thrown together for his collection. But we could be wrong. Maybe the genius of this iconic American designer is that he makes a sweet symphony out of usually jarring elements. Maybe. Reed Krakoff September 16, 2010 America’s favorite homegrown luxury brand, Coach, has a very chic spinoff: Reed Krakoff. The line is the personal project and name of Coach’s Creative Director. The line is aimed at a more fashion forward woman than Coach’s classics loving audience, and to that end the shapes and fabrics are more modern and edgy. For Spring 2010, Krakoff showed boxy shapes and sheer fabrics (this seasons major theme). There were some gems, a khaki colored jumper and chunky knit vest with a deep v to name a few, but overall the line felt like luxury in limbo: too young to reach Coach’s audience and too mature – and pricey – to reach the young fashionistas its courting.

Tory Burch September 16, 2010 Kanye West likes to visit as many shows as he can during Fahion Week. But still, seeing him here at Tory Burch, a decidedly feminine brand with a prep-chic spirit was a bit unexpected. So too was the sheer symphony of easy, gorgeous, wearable pieces that floated down the runway. For Spring 2011, Burch is prepared to clothe her woman from day (knee-length skirts and feminine blouses) to night (gold lame one shoulder top) and from rain (chic, unfussy trench) to shine (bright orange ankle length dress bursting with style). There was everything to love about this collection including, ultimately, Wests’ presence: these pieces will work well for his next muse/girlfriend. .