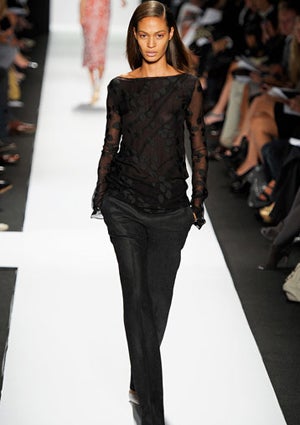 Narciso Rodriguez September 15, 2010 Sometimes, subtlety can be the most dramatic statement of all. Case in point: Narciso Rodriquez’s Spring 2011 collection, a masterclass in playing it low key. Rodriquez sent thirty looks down the runway, almost all of which were black, white and gray. The shapes in his collection were similarly simple: ankle length billowy skirts, tailored pants, and simple tanks.  His woman isn’t trying to stand out for wearing the brightest, shortest dress in the room. Instead, she simply commands attention for the same reason Rodriquez does: showing off, simple, chic and well made clothes.

Rachel Roy September 15, 2010 If you want to see a designer at their best, then look no further than Rachel Roy and her Spring 2011 collection. The presentation, held at the Public Library at Lincoln Center epitomized the Roy woman: elegant, chic, modest yet sexy. For Spring, she told this woman’s story using silks, linens and knits. The colors were electric (blues, purples and pinks that lit up the room). The patterns were bold (sweet florals and strong stripes). And the silhouettes were seductive (cinched waists and softly draping necklines.)  By the end of the presentation, which was attended by Andre Leon Talley and Veronica Webb, the line to congratulate Roy was nearly impossible. Understandably so: good work attracts that kind of response. Herve Leger September 15, 2010 It’s possible that no brand that shows during New York Fashion Week enjoys quiet as much mainstream appeal and popularity as Herve Leger. The label, relaunched a few seasons back by Max Azria is famed for it’s signature bandage dress: tight, short and intensely sexy. It’s a theme that, aside from different fabrics and colors, the designers of the brand generally haven’t bothered to deviate from. Until now. This season saw them debuting other fabrics (perforated metallic leather), new lengths (calf-length gown) and even new shapes (a geometric wonder that jutted out at the hips and thighs). At just fifteen looks, these new ideas could have been explored a little bit more. But we aren’t complaining. The one trick pony is finally finding some new ones.