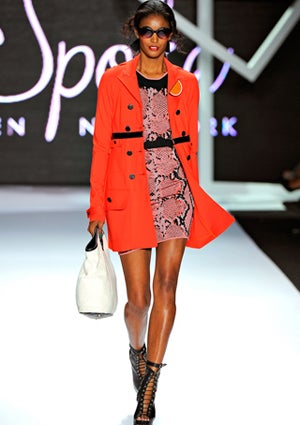 Z Spoke by Zac Posen September 12, 2010 It’s clear from the very first time Sessilee Lopez stepped onto the stage for the Z Spoke Spring 2011 collection: this was going to be fun. The blood orange jacket, sorbet pink patterned dress and playful smirk she wore on her face was only just the beginning. What ensued were thirty absolutely delicious outfits that made us smile uncontrollably. But that’s exactly what Zac Posen, the young designer with serious credentials was going for. After several seasons of showing elegant gowns for a more mature woman, he debuted this lower-priced line to attract the younger, celeb-obsessed set. Hence the front row: Ciara, Kimora Lee Simmons and legendary fashion blogger, Bryan Boy. By the end of the show, we were just as excited for the young women Posen is designing for, as we were for the young man who designed it.    EDUN September 12, 2010 Despite its rockstar roots — U2 frontman Bono and his wife Ali Hewson created this label — Edun is more about giving than glam. The brand has a mission to stimulate trade with Africa and to end, fifteen percent of its garments are created by artisans there. Along they way, they’ve fulfilled another mission: proving the charitable can be chic. Still in its early stages, the brand seamlessly showcases clean, modern clothes crafted from earthy elements. This brand DNA was on full display in their Spring 2011 collection which featured wooden sequins, leather khaki and beads. It’s a solid showing for the new brand and echoes what its rockstar founder does best: leaves us wanting more.

SUNO September 12, 2010 Like most foreigners, Max Osterweis had a near obsession with African textiles. And like most foreigners, he made a business out of it. After nearly a decade of collecting textiles from the nation of Kenya, he decided to turn his passion into a business that profits locals. Enter: Suno, a contemporary label launched in 2008 that is designed in the U.S but had crafted in Kenya. The buzz has been rapidly building since they launched. It’s culminating into an exceedingly well received Spring 2011 line that features simple and whimsical silhouettes (knee length dresses, shorts, oxford tops) created with the richly complex and vibrant prints signature prints from the line. It was difficult to pick a favorite, so we won’t attempt. But what, unexpectedly, caught our attention — and still hasn’t let go? The shoes: chic, strappy flats and sky high wedges made with Suno’s bold textiles. The good news: they will be available for purchase in February 2011 at Opening Ceremony boutiques and Loeffler Randall online. Run — don’t walk.