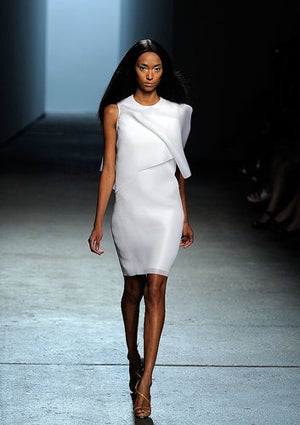 Cushnie Et Ochs September 10, 2010 New York – These girls finally loosened up. Carly Cushnie and Michelle Ochs, the stunning beauties behind the Cushnie et Ochs label, debuted a Spring 2011 collection full of fluid shapes and soft fabrics. It’s a departure from their last three seasons where their love of clean lines also meant rigid shapes strutting down the runway. Their show opened with a knee skimming, simple black sheath which featured the duo’s signature asymetrical neckline. The combination of angular cuts and soft draping continued through the fifteen minute show, which featured a total of seventy-six looks. Consistent throughout was the muted color palette: cool khakis crisp whites and rich blacks with shots of sheer floral patterns and one particularly ornate gold foil patterns. By the end it was clear: these young designers, only recently graduated from the Parsons School of Design, are part of fashions’ next wave. Richie Rich September 10, 2010 A quick Google search of the Richie Rich Spring 2011 collection, which debuted last night, yields lots of images of Ellen Degeneres – his surprise model at the end of the show – but very little “fashions.” That’s how it’s always been with this New York Fashion Week icon: more stars and spectacle than actual style. But to his credit – that’s changing. His Spring 2011 show, featured more wearable clothing from him than we’ve seen in a long time. The pieces, from ruched, sparkly sleeveless dresses, to super long tulle skirts in candy colors, echoed the designers spirit: fun, youthful and always down for a celebration. True – not everyone wants to look like a party girl who’d rather pay for a night on the town than pay her rent. But if that girl is you – then you’ve found your favorite collection.

Christian Siriano September 10, 2010 If anyone “made it work” after Project Runway, it was Christian Siriano. Possibly, the Bravo reality shows most successful alumn,  Siriano continued that success with his  triumphant Spring 2011 runway presentation. These weren’t clothes – or shoes for that matter – that make sense for real life. Instead they were imaginative concoctions – the kind of pieces every little girl dreams of wearing to a ball when they find their prince. Imagine: floor grazing with froth sorbet pink tiers that raced up to a gold bustier or bold red gowns with ornate frills so big, the model looked like she was being engulfed in flames. Siriano had no problem ricocheting from such lush gowns to the most minimal outfits: a simple white sheath or even shiny lurex shorts and a jacket. By the close of the show we couldn’t decide who was having more fun here: the designer who is clearly living his dream or the audience which was fully entertained by it.