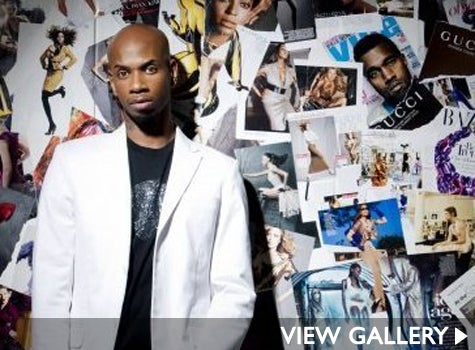 It’s a year later, but the name Reco Chapple still evokes emotion and recognition. The Chattanooga, Tennessee native who burst onto the national scene as a contestant on the Kelly Rowland hosted, “The Fashion Show,” captivated an entire audience of fashion enthusiasts. So beloved was his larger than life, charismatic and witty persona that his home paper, The Times Free Press, described his being voted off from the show as “the second biggest surprise of the season.” But, in the House of Chapple, being fourth place is as good as being first. He turned the exposure into a book deal, national speaking tours, and the recent debut of his Spring 2011 collection during New York Fashion Week. We caught up to talk about his hustle and his haute couture. ESSENCE.com: What ignited your interest in fashion? RECO CHAPPLE: It was already flowing through my blood and passed down from my great grand mother to my mother. I am the fourth generation that has been interested in fashion. So when the opportunity presented itself, I jumped at it. ESSENCE.com: How did it feel when you showed your collection in the same venue as popular designers, such as Donna Karen. CHAPPLE: It felt absolutely amazing. I figured if I want to be like the big boys, I have to play in the same league with them. ESSENCE.com: What was your inspiration? CHAPPLE: I pulled inspiration from (the novel) “I Know Why The Caged Bird Sings,” by Maya Angelou. When I first started working on the collection I got a call from my aunt and she told me that she was diagnosed with breast cancer, so that’s where the idea of pink came from. I wanted to pay respect to the woman who raised me. I pulled beauty out of such a dark poem to symbolize that what ever you go through – you can make it. Lastly, I was thinking of the woman who would wear Reco Chapple; a strong, beautiful and intelligent woman. ESSENCE.com: In a lot of ways, that woman is a celebrity! We’ve noticed your star-studded client list from Kelly Rowland to Tasha Smith. What are some of the pieces you have designed for them? CHAPPLE: I’ve worked with many celebrities such as Michele Williams and Monica and many more. But, my favorite piece has been a gold jumper I created for Fantasia. ESSENCE.com: Which other celebs would you love to work with in the future and why? CHAPPLE: Michelle Obama, Sarah Jessica Parker, Monique and Taraji P. Henson! These are women who reflect the brand of the House of Chapple. They stand out from the rest. ESSENCE.com: What can we expect from you in the future? CHAPPLE: Slowly turning my brand into a lifestyle and a household name.  Follow on twitter @Recochapple