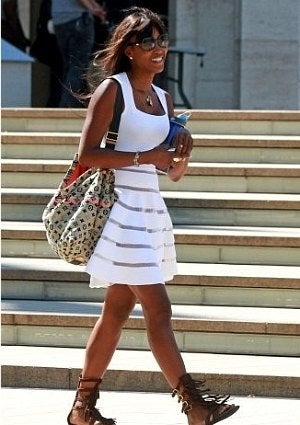 Sorry fashionistas, no “Naomi Campbell walk” for you this fashion week. She’s taking some time off.  Admittedly, this ESSENCE 40th anniversary issue cover model’s life has been anything but peaceful of late. Fresh from testifying at Charles Taylor’s blood diamonds trial, the legendary model says she’d like to take a little time for herself, away from the runway. “I’m not retiring, just taking the season off,” she told New York Magazine during a celebration of her 25 years in fashion, hosted by Dolce and Gabbana. “I mean, if one of my friends asks me, like Stefano [Gabbana], sure, I’d be professional and walk,” she added. But, “I don’t really [walk].” The iconic model also voiced her support of “Real Housewives of New Jersey” star Teresa Giidice’s equally famous temper during a call-in with Bravo’s Andy Cohen. Campbell said she “understood” why the Jersey housewife lashed out at co-star Danielle Staub during the show’s heated reunion. “You mess with her family and that’s what you get!” Could Campbell be seeing herself in Giudice?