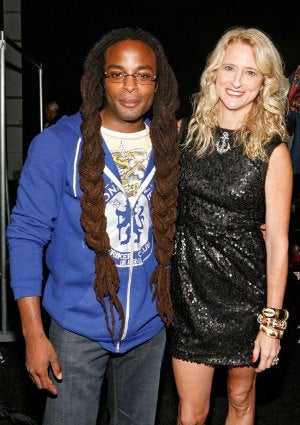 We don’t hear much from Grammy nominated musician and producer John Forte — famed for his grizzly-voiced lyrics on The Fugees’ “The Score” album and his 1998 his hit “Ninety Nine (Flash The Message)” from his first solo effort “Poly Sci.” Those of us with a seat at Nanette Lepore’s Spring 2011 Fashion Show at New York Fashion Week at Lincoln Center will get a taste of what he’s been getting into lately. Forte and his live band are set to perform three songs created specifically for the show, as models stomp their way down the runway at Lincoln Center. “His artistic talent reflects the feeling we all have at the moment of wanting something handmade and unique,” Lepore has said of collaborating with Forte. Forte has returned the compliment, saying, “I’ve been a fan of Nanette — the person and the designer — for some time now. What we’ve set out to do is inspire each other’s work. …Our collaboration is an exceptional moment; one that feels pioneering and yet unforced and organic…a natural progression in an attempt at making something beautiful.” If you can’t get a seat front row at the Lincoln Center, the Nanette Lepore Spring 2011 show will stream live on nanettelepore.com on September 15 at 11 a.m.