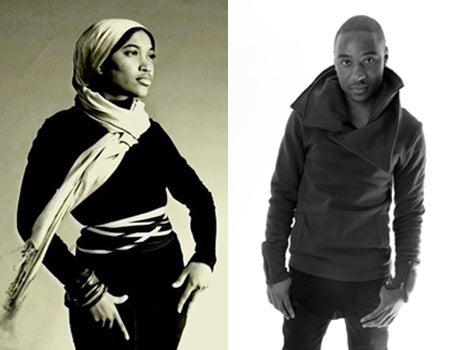 No, their names may not sound familiar. But give them a year. Barely out of college, the dynamic brother and sister team of Louie and Anasa Greaves is already hitting milestones. Both have been selected to debut their student collections during New York Fashion Week at the prestigious Academy of Art University show today. This honor is bestowed to only a few students each year by the Academy of the Arts University in San Fransisco, from which they are both graduating. It’s been an interesting road for the two. Anasa initially wanted to be a nurse, while Louie (who will be working professionally as Louie Llewellyn), always focused on his fashion while studying — and juggled a full-time job at Jimmy Choo. The hard work and self-discovery paid off. On the eve of their debut, we caught up with them to chat about their collections, their relationship and their very proud parents.     ESSENCE.com: You are debuting in a matter of hours — are you nervous? ANASA: Oh I’m definitely nervous but I mostly just talk to my mom, she’s been keeping me sane. LOUIE: Being nervous is an understatement. There isn’t too much I can do besides eat. I eat the worst out of all my classmates. When anything with sugar is in the studio, everyone knows that the culprit is me. ESSENCE.com: So what kind of collections can we expect to see coming down your runways? LOUIE: I designed my collection with two feelings in mind — simply a strong and sexy man. My man is ageless and he speaks through actions and appearance. He learns by observing others and demands what he wants with his attire. His presence is strong, attractive, and a little provocative. He is the the quintessential guy trying move into modernity one day and then heading the opposite direction the next ANASA: My collection was a collaborative project — so there were several students, including me, who worked together to create it. It was inspired by British influences from Oxford cricket to British interior — just to name a few. It’s a spring/ summer collection and it’s bursting with color, and volume.   ESSENCE.com: Who are some of the designers who have influenced your work so far? Anasa: The designers who influenced me the most have been Kenzo and Tracy Reese. LOUIE: Bee Arthor, Rick Owens and Julius (my favorite Japanese designer) are the three designers whom I have been compared to the most. Season after season their collections always make me think about the journey the man wearing their clothing is going to take. ESSENCE.com: Louie, what would you say sets your collection apart from the others debuting today? LOUIE: What sets my collection apart from the other designers is that I am the only menswear designer and the others are womenswear designers. I am also an east coast boy, born and bred, and I design with that edge. I love my classmates and the fact that we are all showing in Mercedes-Benz Fashion Week at Lincoln Center but I am definitely pushing myself and my Louie Llewellyn collection to be noticed by the audience and the industry. ESSENCE.com: How did you two end up being at the same school, graduating on the same day and showing your collections on the same catwalk? ANASA: We’ve always been interested in fashion. I started out doing nursing with the intention of obtaining a nursing degree, bringing home a steady income and then going back and fulfilling my lifelong dream to be a designer, but when you’re in Anatomy and Physiology sketching garments, something has to give. I also started college when I was sixteen, so my mom still very much had control over my life. But two years into the program I realized I had to follow my heart. By that time Louie was working on his degree in Fashion merchandising and after convincing him that the academy was a great school he joined me my second year there. ESSENCE.com: So what does sibling rivalry look like for you two? ANASA: What’s that? (Laughs). We’re both really competitive however when it comes to one another we’re always supportive and helpful. LOUIE: We don’t have much sibling rivalry but when one of us is trying to give the other advice that we know is right, we make jokes like “you’re trying to sabotage me,” then we laugh, wrestle and continue designing. ESSENCE.com: We can only imagine how proud your parents are. LOUIE: Yes, they are extremely proud of us. We are the first two in our immediate family to go to college. They are excited for us, and naturally, we want to make them proud. ANASA: Proud is an understatement. Our parents are elated, to have both of their kids showing at NY Fashion week, lets just say I’m surprised the whole of NY doesn’t know by now.