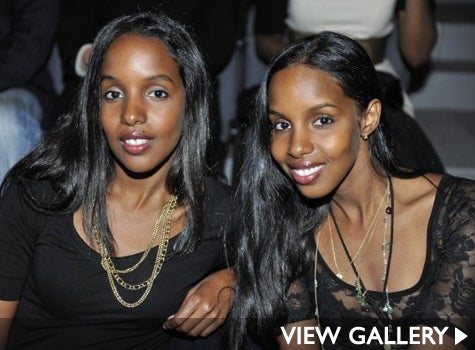 In Somalia, the word “Mataano” means “twins.” In New York City, it’s starting to mean “amazing clothes.” The dynamic duo making it so are Ayaan and Idyl Mohallim, born and raised in Somalia, who moved to Washington D.C at an early age. As teens, Ayaan and Idyl moved on to earn degrees in Business Management and English respectively. But the twins’ passion for fashion took them in another direction post college. They moved to New York, where Ayaan worked in design and production for houses like Jill Stuart, while Idyl became a fashion assistant at Black Book magazine. By day, they honed their skills and by night they launched Mataano, their Africa-inspired clothing line, now in it’s forth season. Along the way, Oprah came calling, highlighting the sisters in her show a few months back. Now nearing their second year as designers, they are still attracting attention with their phenomenal Spring 2011 presentation. We caught up with both sisters to talk fashion, growth and of course, Ms. Winfrey. ESSENCE.com: Describe your Spring 2011 Collection to us. Ayaan: We felt  bit nostalgic towards 1960s style, but we added a very modern style. It’s pretty much one-hundred percent organic silk or silk linen or another variation on silk. Even pieces that look like they are denim are made from silk. Idyl: We love it because the colors are subdued and have earthy tones and soft salmon and peachy colors. It’s an interesting marriage of fabrics and unexpected touches. It’s very feminine and very elegant. ESSENCE.com: How is this new collection different from previous ones you’ve shown? Ayaan: Our brand is becoming more defined by a soft, elegant aesthetic. In our last collection, shown during Africa Fashion Week, we presented pieces very influenced by African culture with prints and Fulani earrings. But this season we moved away from that. We realize that we are African, but we are also New Yorker and wanted to present clothes with both aesthetics. Idyl: I think this collection is our strongest yet. And every season we just get stronger as designers. We love it. ESSENCE.com: The evolution continues for you two. November marks your second anniversary as designers. How does it feel? Idyl: We’ve come a long way from basically on-the-job-training in the fashion industry, to sacrificing and saving to produce our first ten piece capsule collection while working every day to becoming full time designers this past January. Now we are being invited all over the world from South Africa to Ethiopia to Nigeria to Boston to showcase our collection. It’s all beyond our wildest dreams. But we are also proud to say that we honestly worked really hard to get to this point. ESSENCE.com: As designers, what kind of women do you envision, when you put pen to pad and start sketching? Idyl: The Mataano women is an ageless woman. What defines her is her elegance, her stylishness. She is someone who transitions from day to night and from country to country and needs beautiful, elegant, sexy clothes to match. ESSENCE.com: What other designers would you say have influenced your vision and aesthetic? Ayaan: Personally, one of my favorites has always been Oscar de la Renta. I also love Rachel Roy. But honestly, there are so many amazing designers out there. Every season, I am blown away by the amazing work everyone is doing. I can spend all day looking at designers on Style.com. ESSENCE.com: As the next generation of designers. What do you think you bring to the table? How do you elevate an already crowded market place? Ayaan: Just being Black and African and women adds another dimension to the dialogue. There aren’t that many of us in the industry. Our voices aren’t being heard in fashion. Idyl: To add to that, we aren’t doing urban wear, so it’s a different kind of woman we are speaking to. At the end of the day we want to show that Black women are fashionable. We want to be role models and inspire the next generation of Black women to join this game. Ayaan: And of course, we make beautiful clothes. (Laughs). ESSENCE.com: They are! You even caught Oprah’s attention. What was the effect of your appearance on her show? Idyl: It was a lot of instant exposure. It didn’t really solidify our brand or us as designers, but it got people talking and got people interested. Ayaan: It was like an explosion. We had four thousand hits on our site within an hour of our appearance. ESSENCE.com: So now, how can we find and buy your amazing pieces? Ayaan: We are now sold at local boutiques throughout the country and looking to get into department stores with this Spring 2011 collection. We are also sold online at www.mataano.com so log on!