Outside of bachelorette parties and the occasional shopping spree, panties aren’t always the hot topic of conversation. And, while we love to shop for them, aside from washing after wearing, we don’t really think too much about how underwear affects our hygiene. In fact, when it comes to fashion—visible or unseen— we overlook a lot outside of appearance. Women often flock to lingerie stores in search of lace or silk garments accented with a bow or the occasional print, or stringy things that barely have enough material to cover the very parts they’re made to protect; but we rarely think about whether these garments are actually working in our favor. Perhaps on some basic level, we do not think we have a choice in how proactive our underwear is—I mean, panties aren’t exactly a political statement, so the pass/fail test doesn’t really extend beyond “keep me covered.” However, it turns out, we should be more strict in the panty department and look for something called “moisture wicking technology.”

“Moisture Wicking” is a lofty way of saying something inhibits moisture. This is beneficial for various reasons, some less obvious than you may think. Most panties have a moisture guard that is ineffective in that it absorbs moisture, but doesn’t disperse it which prevents it from drying quickly. When paired with body heat, warm environments such as these promote yeast production and other below the belt inconveniences such as irritation and inflammation. If you combat moisture by using panti-liners, North Carolina-based OBGYN, Dr. Nancy Palermo advises you to do otherwise, saying:

“Avoid wearing panti-liners unless absolutely necessary. They increase moisture and odor. The moisture and increase in bacteria can cause skin breakdown and dermatitis.”

In other words, nothing that you want your name attached to.

If you’re like me, you grew up in a house where your mother championed wearing 100% cotton clothing because of its’ “breathability.” Never mind fashion, breathability was all that mattered on sweltering summer days. Underwear is no different. Synthetic fibers trap heat and increase production of moisture and bacteria, so while your Brazilian-cut bottoms may be super cute, they may not be doing you any favors in the areas where it counts. Luckily, there is a company that produces 100% cotton panties with moisture wicking technology built-in —and no, they don’t look like something from your grandma’s vanity drawer.

Knock Out! Smart Panties give you full protection without compromising on sex appeal. Choose from an elegant selection of bikinis, briefs, boy shorts and thongs that guarantee to keep you dry from your morning work out until dinner time. We tested a few pairs, and not only are the cuts super cute, but the moisture wicking technology really works! The bottoms are comfortable, breathable, and undetectable—that’s right, no panty lines! Your underwear should be proactive. Try a pair for yourself; you may be a Knock Out! convert too! 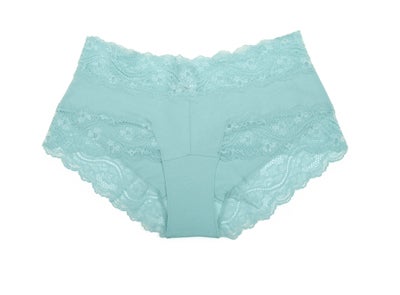