Last night the Council of Fashion Designers, comprised of fashion’s most respected industry insiders, announced the nominees for their prestigious award ceremony in conjunction with Swarovski.

CFDA President Diane von Furstenberg announced that the “Founders Award,” given in honor of CFDA founder Eleanor Lambert who is widely credited with putting American fashion on the map, will go to Fashion Activist Bethann Hardison for her persistent fight for diversity in the fashion industry. “Wow, since I’m from the 60s and 70s Eleanor Lambert was somebody that was very important in my life,” Hardison shared with ESSENCE. “I grew up in the garment district because I worked with two very special young men, Willie Smith on the side, but my main connection was through Stephen Burrows.”

Hardison will be honored on June 2 at the official award ceremony at Lincoln Center. “The idea that the CFDA in general would give me a recognition is really wonderful, not so much for me, but for the issue I dare to approach the way that I do,” she told us. “I do it to help them, I’m not trying to help us. We can go to a party and have a good time –– we’re good. I’m just trying to help them. Activism has to remain active.”

On another high note, nominees for Menswear Designer of the Year include design duo Public School who won the Swarovski Award for Menswear last year and are now passing the torch to nominee Shayne Oliver of Hood By Air, another designer of color up for an award. 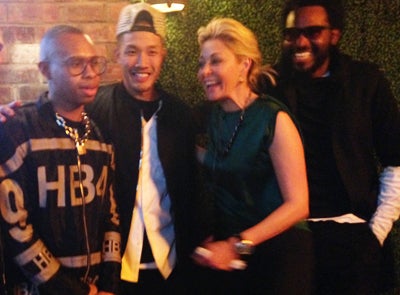 Excited to see diversity at the CFDA awards this year!