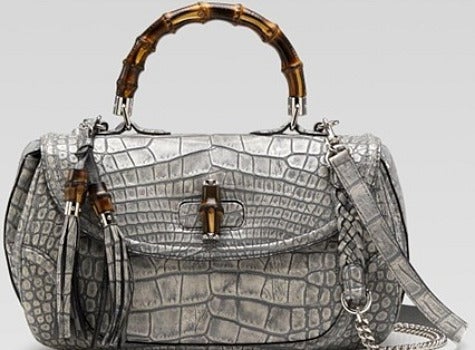 Gucci’s 90th anniversary may not be till next year, but the iconic luxury brand has already begun celebrating by looking back at the label’s rich history. They kicked off their walk down memory lane last month with the launch of their partnership with Christie’s auction house. “Gucci Collector: Presented by Christie’s” is an exciting free online service which allows Gucci handbag owners to get their vintage bags appraised by the premier auction house. Gucci is the first fashion house to be featured in Christie’s website. The Gucci Collector project is a great treat for fans interested in learning more about the design evolution of Gucci handbags and shoppers, if you’ve got it like that. Just this past weekend Gucci unveiled a new ad paying homage to the early days of the successful company. The ad features a black and white image from the 1950’s of men working in the factory in Italy. The leather good label, which was founded in Florence in 1921 by Guccio Gucci, has long been considered the height of luxury. The signature “GG” logo made the bags an instantly recognizable status symbol hanging from the arms of actresses, first ladies and socialites in the 1960’s and 1970’s that flocked to Gucci. 89 years later, the brand, who has had its share of shout-outs from rappers on wax, continues to thrive as one of the most coveted, and counterfeited, handbag brands around. Gucci is also going back to its roots when it comes to design. The label is drawing from their celebrated designs of the past century, like the red and green ribbon and the horsebit, for their latest bags in conjunction with their 90th birthday. But it’s not all about the past, Gucci is also showcasing its longevity by giving a modern update to signature classics.  The new Jackie O is tough girl chic with metal hardware and the beloved Bamboo get a new carved wooden handle. The nostalgia will hit its peek next year with the opening of the Gucci museum in Florence where an incredible archive of never-before-seen vintage bags will be housed and available for public viewing.