Ever since her 2009 feature film debut in Precious, Gabourey Sidibe has been making waves in the entertainment industry, and she hasn’t looked back since. Not only has she garnered praise for her acting chops, but she’s also drawn attention because of her unconventional beauty — one that resonates and forces you to question the status quo of Hollywood’s standards of beauty.

Sidibe — fully aware of the challenges that have faced her — has never given up her joie de vivre, and continues to march forward to the beat of her own drum! She carries the title Oscar-nominated; she’s had a fiery and intimate love-scene on the set of the hit TV show Empire; and she’s played the role of a bad-ass villain on American Horror Story.

Epitomizing the phrase Black Girl Magic, was had the opprotunity to catch up with Sidibe and find out the story of how she got to where she is today; her trials and triumphs, as well as the importance of having a mentor. Let’s take a look at some of her best moments and also see what she had to say about a LOT of stuff…

ESSENCE: In regard to film and the entertainment industry, what has been your biggest challenge and/or hurdle to cross?

Sidibe: I guess the biggest hurdle is fear. The thing is, I’ve been an actress for about 9 years and at some point, I should want to add more to my resume than just acting. Fear will tell me that I’m not good enough to do more. That I’m not good enough to choose a story to tell, to write, to direct, or to say anything other than what someone else told me to say. Fear that there’s no value in my voice. The challenge is figuring out how to not listen to that voice and start sharing MY voice. I had to hurdle that fear while writing my book and again when I started directing.

ESSENCE: Tell us about the ASC campaign and what it means for you to have a mentor in the business?

Sidibe: It’s really important to have mentors who are not only doing with their lives, what you want to do, but are also being the kind of person you want to be. I have several mentors. Mostly black female film makers who’s opinions I trust. Who get their work done because it’s important to them and they don’t apologize for taking up any space on earth. I’m REALLY into unapologetic women because it is still my urge to apologize for breathing. It’s still my instinct to do for others instead of doing for myself. That’s the code written into my genetics as a black woman but watching and learning from my mentors like Lisa Cortes, Victoria Mahoney and Sanaa Hamri, reminds me that my space in the world is just as valid as anyone else’s.

ESSENCE: When preparing to hit the scene —  do you have a method for getting dressed? Is there music playing? Is your stylist there. Is it a turn-up situation?

Sidibe:  If it’s a lowkey night out with friends, I usually listen to Rihanna and Jhene Aioko on pandora as I do my eyeliner and mascara with a bold lip in the mirror.  If it’s a night of actual work, like a premier or red carpet event, then I have my team running around beating my face and whippin my wig while listening to Brandys pandora station. There’s a method! I’m never NOT listening to music. Even right now, I’m listening to Drake. When I’m just chillin at home, I’m listening to podcast like The Read. I can’t be left alone with my thoughts lol.

ESSENCE: How would you describe your personal style? And what are your ‘go-to’ brands of clothing? Do you have a favorite bra?

Sidibe: My stylist was just asked what my style is and she answered that I like to dress like a little girl. That’s not NOT true. I like kind of short dresses, with skirts that spin out when I twirl. I am apparently 4 years old. I think because I wasn’t able to dress how I wanted as a teenager, I’m acting out now. Though my style is moving into a more adult arena like Eloquii now I think. Also I’m super into African print clothes from Grass Fields. It’s all I want to wear lately. I’m also really into Biggie tee shirts. When I directed my first short film, The Tale Of Four, this past summer, I wore a biggie shirt with an African skirt everyday. I don’t know how grown up that is but dammit it’s what I wanted to wear! My bras usually come from Torrid and Lane Bryant. I actually get asked about my bras all the time. It’s super weird but I get it. Tell your…”friend” that Lane Bryant has a ton of sexy and actually comfortable bras in fun colors that don’t make you feel like a church lady digging for the offering.

ESSENCE: Is there a certain pressure that comes along with having the title, “Oscar nominated” behind your name? Where do you see yourself, within the next 10 years?

Sidibe: I really wouldn’t know. I’ve been an Oscar nominated actress since my first film. Outside of 1 other independent film, my whole career, I’ve carried that monicker into every production I’ve been a part of. I’m sure it’s made it easier to be seen in this industry. I might’ve faded right back into obscurity without it. Any pressure that comes along with it, I’ve been carrying this whole time really so it doesn’t really nag at me. At this point, the pressure really only comes from my own mind. Meh…. maybe. 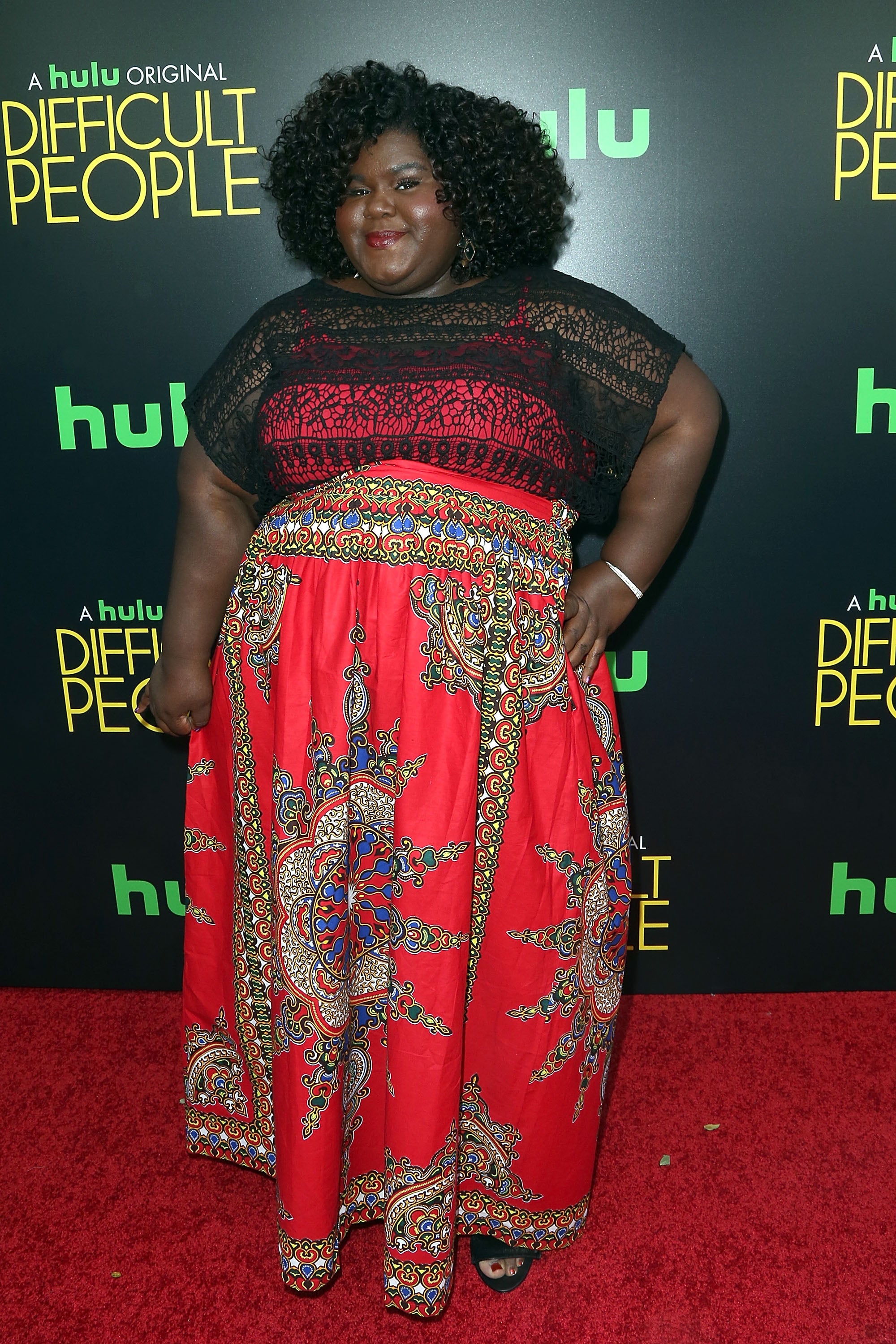 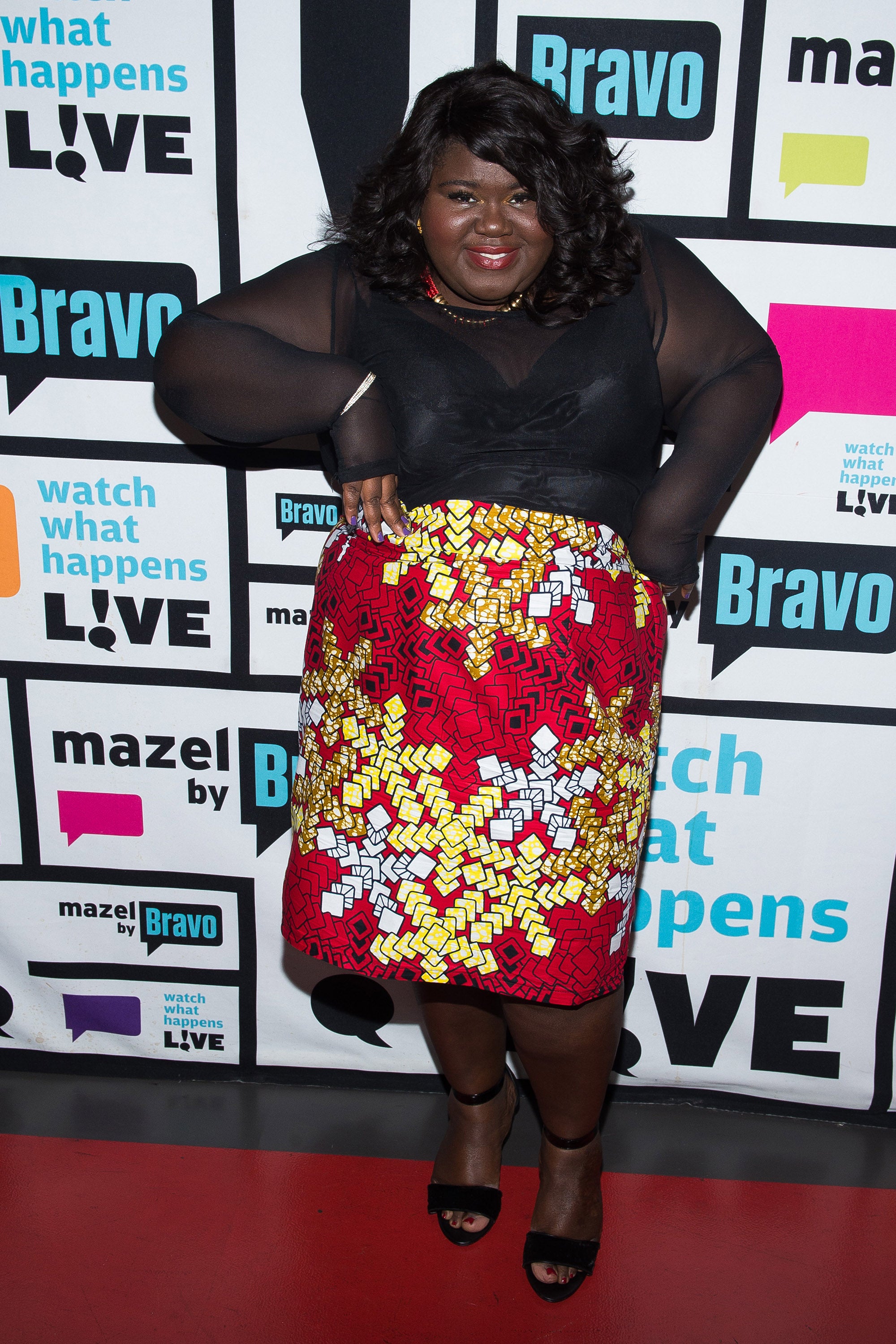 Gabby winds down with her favorite playlist

All The Way Up! Gabby’s billboard for Lane Bryant

Can we say #Goals …Gabby gives us life, and we’re glad that there are tons of girls coming up behind her that are ready to help shape the world.