By clicking Sign Up, you agree to our Terms of Use and that you have read our Privacy Policy
Skip to content
Axelle/Bauer-Griffin/FilmMagic
By ReBecca Theodore-Vachon · Updated October 23, 2020
It was a sunny Saturday afternoon in June and I was in the middle of Nordstrom’s women’s wear department, my eyes stinging with tears of frustration. Just a few days before I had been invited to appear on a national news program to discuss Roseanne Barr’s firing from ABC. So to celebrate this latest career accomplishment, I decided to treat myself to a new dress. What should have been a happy occasion soon turned to irritation and humiliation – every dress that caught my eye was too small. All the size 2’s, 4’s and 6’s seemed to mock me and my size 12 to 14 frame. I thought about that slice of deep dish pepperoni pizza I’d had the night before and the slice of strawberry cheesecake from Junior’s around the block I’d planned to get after my shopping spree. Soon, the negative inner dialogue went on a loud, toxic loop inside my head and I nearly called the news producer to cancel my appearance, when I stepped away from the clothes rack to collect myself. I took a deep breath and reminded myself of something actress Danielle Brooks said about shutting down her own negative inner dialogue. “There’s only so much beating myself up that I can take,” she told Self magazine back in 2017. 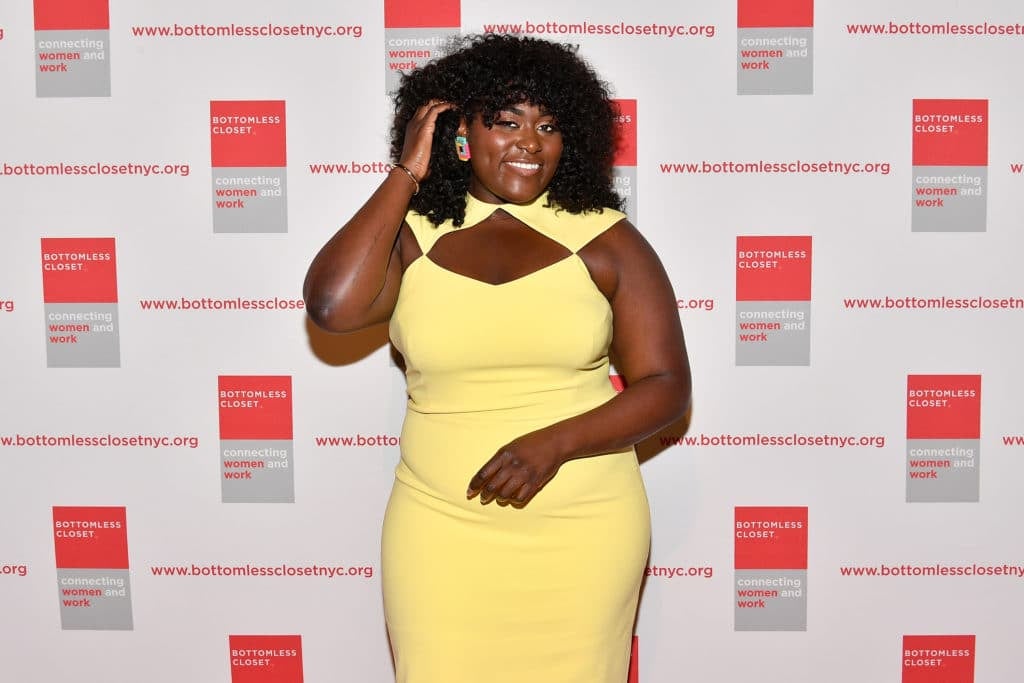 I found comfort in those words. I replayed Brook’s words in my head and realized that I was not honoring or loving this body, but reducing my worth because of an arbitrary dress size. As we fight for more inclusive representation on the big screen, seeing well-written and three dimensional plus-size women onscreen hasn’t been a priority for most filmmakers. Which is why the trailer for the upcoming rom-com Isn’t it Romantic was a pleasant surprise when it dropped last week. The lead is Rebel Wilson, a plus-size Australian actress and comedienne, known mostly for her character Fat Amy in the Pitch Perfect franchise. Isn’t It Romantic, however, is a cheeky send-up of Hollywood clichés as her character Natalie wakes up from a concussion and realizes she is trapped in a romantic comedy. Wilson appeared on The Ellen DeGeneres Show later that day to promote the film, declaring herself the first plus-size actress to lead a studio-backed romantic comedy. Twitter users were quick to correct Wilson, mentioning other plus-size actresses like Ricki Lake (Hairspray). Black Twitter also came with the receipts listing Queen Latifah’s work (Last Holiday, Just Wright) and Mo’Nique, who headlined Phat Girlz. Wilson and her TL remained mum until @Halfapintdoll tweeted, “I love @RebelWilson as much as the next girl, but she isn’t the first plus sized woman to lay the lead in a romantic comedy. Queen Latifah and Mo’Nique have both played romcom leads.” Wilson, in an amazing display of ignorance and white privilege, dismissed her statement by questioning whether Latifah and Mo’Nique were “technically plus-sized” when filming these movies.

Black Twitter, particularly plus-size and fat Black women weren’t here for Wilson’s shenanigans and erasure of their representation onscreen and sounded off in response. Even Mo’Nique responded to Wilson’s ridiculous claims: “Hey my sweet sister. Let’s please not allow this business to erase our talent with giving grey areas and technicalities. Take a moment and know the history. DON’T BE A PART OF ERASING IT. I wish you the best.” I found myself especially aggravated because Mo’Nique was absolutely correct – this was indeed erasure. Queen Latifah has been a beacon for plus-size Black women for nearly three decades. Her 90’s sitcom Living Single had not one but three characters with Khadijah, Sinclaire and Regine, who represented diverse body types. Not only was their size never an issue, these three women enjoyed full and thriving professional and personal lives. They were three-dimensional characters with their own quirks, dreams and desires. Latifah would go on to the big screen, continuing to normalize plus-size and curvy bodies in films like Brown Sugar, where she flipped the BFF trope on its head when Mos Def’s character fell head over heels in love with her, totally ignoring her slimmer friend Sidney, played by Sanaa Lathan. 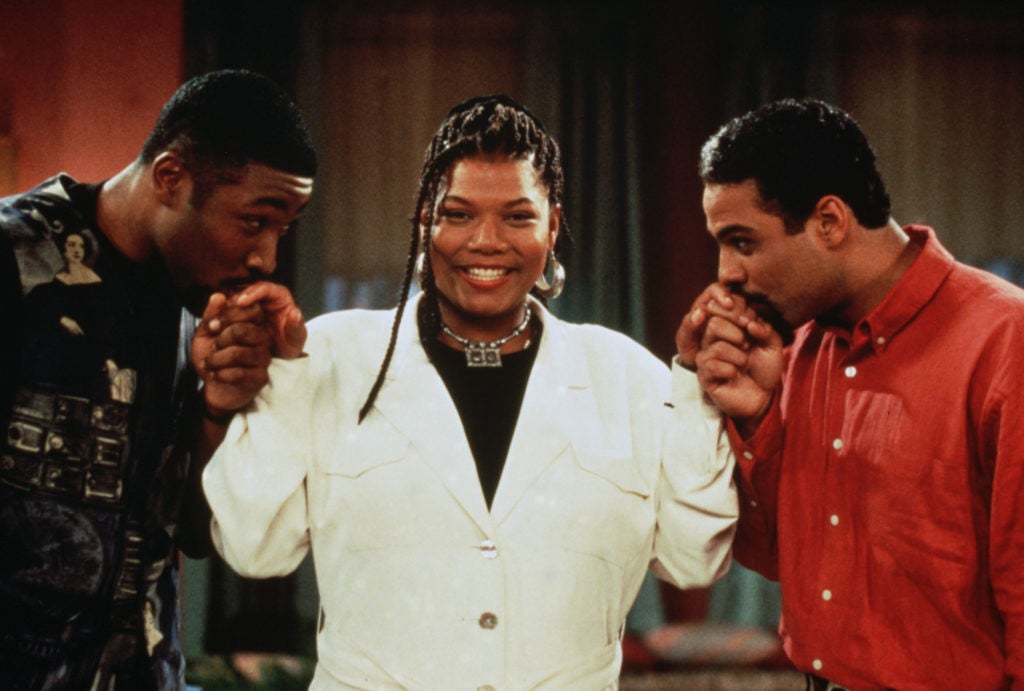 Wilson’s disrespect of Black actresses was just the beginning. Over the next few days, the Aussie actress would go on to indiscriminately block a swath of Black writers, film critics and other people of color, some who engaged with her politely like actress Nabela Noor, who posted a moving video, explaining the importance of seeing Queen Latifah growing up as a young woman of color. Writers like Michael Arcenaux, George Johnson, comedienne Franchesca Ramsey and filmmaker Matthew A. Cherry also woke up to find themselves blocked from Wilson’s account. Writer Clarkisha Kent, also blocked by Rebel Wilson, created the hilarious hashtags like #RebelWilsonBlockParty and #RebelSnap (a clever play of words from the ending of Infinity War) which created a sense of community for those who found themselves on the receiving end of trigger happy Wilson’s block finger. I woke up Sunday morning to find myself blocked as well, which seemingly confirmed my suspicions that Wilson had an axe to grind specifically against Black women, and women color who dared to challenge her. I was far from upset as this is not a new fight for me. I’ve witnessed time and time again how female empowerment in Hollywood only equals white woman representation. On more than one occasion, I’ve had to question the motives of white actresses sounding the horn for more parity in Hollywood if Black women and women of color aren’t included in their fight. I found it fascinating with all the other plus-size white actresses mentioned who came before her, it was Latifah and Mo’Nique’s credentials she boldly questioned. To put it bluntly, the representation of plus-size and fat Black women’s bodies were of no concern to Wilson because her representation (white and female) mattered more.

It wasn’t until Variety (a mainstream Hollywood industry paper) covered the social media backlash that Wilson started unblocking writers and critics, and soon after issued an “apology” on her timeline. But the damage had been done. Black Twitter can hold a grudge into the next five eternities, and as we like to say “screenshots are forever.” The Rebel Wilson backlash and dragging will most likely die down in the next few days, but where does that leave plus-size Black actresses like Brooks? Brooks recently wrapped up her final season of Orange Is The New Black where her character Taystee, has been a continual fan favorite. Where is her leading romantic lead role? Other talented actresses like Raven Goodwin, Gabourey Sidibe, and Amber Riley (currently featured in Nobody’s Fool) are waiting in the wings, ready to carry on the next generation of plus-size representation on screen. 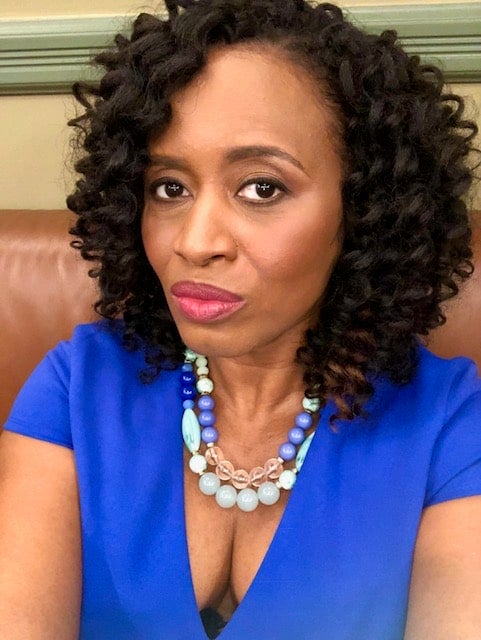 Actress Natasha Rothwell, who plays Kelly on the HBO hit show Insecure said in her feature with the New York Times that she wants “to tell those stories and have someone in the audience that looks like me — a plus-size Black girl.” “Visibility and representation are so important, and I want to do a rom-com for those reasons, but I also just want to run through an airport and live out one of those moments, you know? I want to, like, stand in the rain and shout, ‘I love you!'” Amen, Natasha Rothwell. Amen. P.s. I ended up finding a lovely royal blue dress in my size for my TV appearance, complete with the Spanx of life and tummy control pantyhose. I felt and looked fabulous.