By Sydney Scott · Updated December 6, 2020
We’ve been struggling to prepare ourselves for this, but 2 Dope Queens is coming to an end. The pair’s second season of HBO specials will air this month and while we’re excited, it’s bittersweet. Back in December, dope queens Jessica Williams and Phoebe Robinson celebrated their upcoming specials with a brunch, hosted by HBO and Girls Write Now, an organization that helps underserved girls find their voice through writing. During the brunch, Robinson told ESSENCE that she began working with Girls Write  Now this year. “I was really inspired by the fact that it’s brown girls being told, ‘Your voice is valid,’” the What Men Want star added. Later, ESSENCE got a chance to speak with Robinson and Williams about their plans when the series comes to an end, comedy’s changing landscape, and their creative process. ESSENCE: So, 2 Dope Queens, the podcast, wrapped with an interview with Michelle Obama. Are there any guests that you reached out to or wanted that you never had? Robinson: We never got to have RuPaul. Jessica Williams: Yeah, that would have been cool. Robinson: RuPaul’s always busy. Something I enjoyed about 2 Dope Queens was the conversations you’d have about self-care. The biggest obstacle for me, though, has always been the voice in my head; being my own worst enemy. How to do you work through that? Robinson: I like to become friends with my fear, you know what I mean? I’m like, ‘Okay, I’m going to go out to brunch, we’re gonna hang out, we’re gonna talk it out.’ Because, sometimes, fear is to protect you, but sometimes fear is just holding you back a little bit from your potential that you know you have. Fear and failure, making mistakes, stuff not working out or going the way that you want, that’s where you learn. That’s what keeps you humble and that’s what makes you realize it’s all just part of the process. Williams: I think it’s feeling the fear and doing it anyway, not just putting it in a box but allowing it to exist. And it’s interesting when you actually get up [on stage] or when you face the blank page, being like, ‘Oh, this isn’t the worst feeling,’ you know? It’s like, ‘Actually, I can keep going. I can keep going. I can keep going. I can keep going.’ Just keeping it as a steady marathon and not a sprint, waking up every day and having a new relationship with your fear and yourself. Having worked in the comedy scene, how have things changed for you? What changes have you seen, specifically with New York constantly changing and spaces for creators of color disappearing? Robinson: I don’t know if they’re disappearing. I’ve been doing comedy for 10 years, I’ve lived here for 17 years. Should there be more representation in clubs? Sure, but I think what’s been happening that I’m really excited about is I think the definition of [comedy] is widening. I think it’s allowing people to do comedy, not in necessarily a ‘traditional’ George Carlin sort of way, where you’re standing in front of a microphone with a curtain behind your back. Whether it’s [Hannah Gadsby’s] Nanette or Hasan Minhaj with Patriot Act, he’s found a way to do a political show that is him and not trying to fit a formula. You can start a blog and get a book deal. You can do a web series and learn how to act. 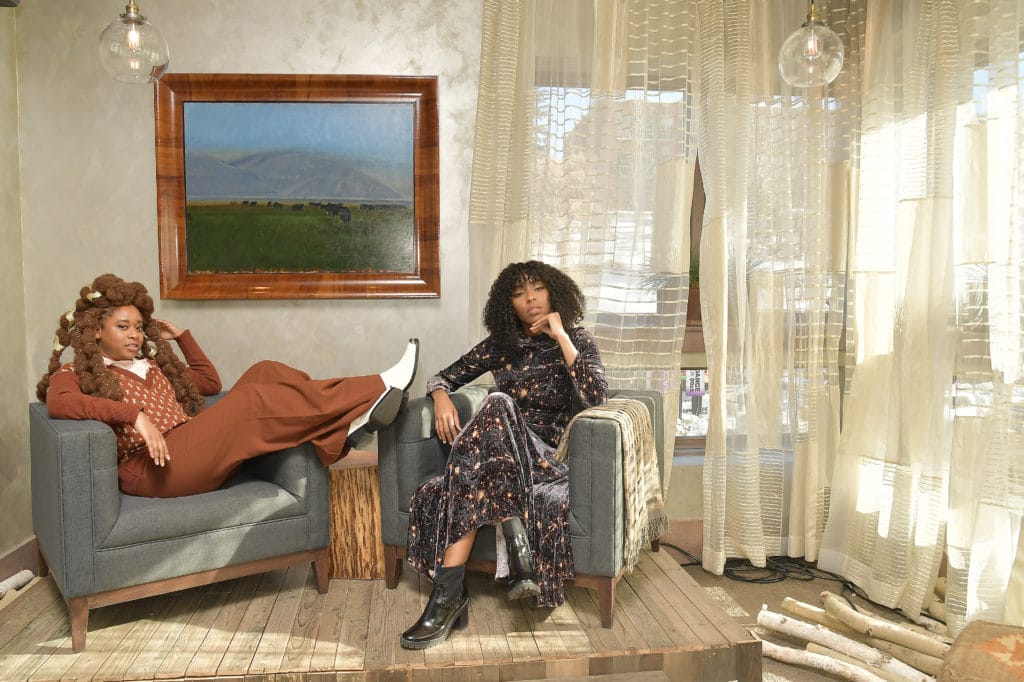 With this new series of specials done and the end of 2 Dope Queens upon us, what do you have planned for 2019? Robinson: I’m a big planner, so I’m working on developing a show for Amazon with Ilana Glazer and Amy Aniobi. I’m going to do a quick little stand-up tour and then I’d like to have my own talk show. I think that’d be super fun because I did so much of that with So Many White Guys. I kind of want to see if I can maybe put that in a different format. Also, sleeping. I really wanna try to sleep and take more biotin, make my hair stronger, because from all the braiding, I’m like, ‘Ooh, I gotta fix these edges.’ And then What Men Want comes out February 8. Williams: I got a few movies coming out next year. I’m developing my own show on Showtime and I am going to live in London for a bit playing a badass witch in Fantastic Beasts, so I’m really excited about that. I do a lot of pottery. I want to open up an Etsy shop or a little IG store would be really fun. I’m trying to get really good at throwing and I’m trying to do heavier pounds of clay. Writing stuff with my friends and seeing what comes out of my playing with experimental forms, trying to work with movement more. I took a really awesome movement workshop a month ago and I really want to just move more. And just do more things that are about mental health awareness and trying to encourage people to go to therapy, but trying to do it in a really personal way. I’m really trying to figure out how to do that. I always try and make sure that I’m being authentic in what I put out, and just really trying to focus on what that is. The second season of 2 Dope Queens specials premieres February 8 at 11 p.m. ET on HBO.