During this last episode, directed by Chris Robinson (ATL), viewers got an intimate look into the personal struggles and triumphs of each man. We first find the now 20-something members of New Edition—Ralph Tresvant (Algee Smith), Michael Bivins (Bryshere Y. Gray), Ricky Bell (Elijah Kelley), Ronnie DeVoe (Keith Powers) and Johnny Gill (Luke James)—in the “If It Isn’t Love” video off their Heart Break album in 1988.

Meanwhile, Bobby Brown (Woody McClain) is filming “Every Little Step I Take,” in which his iconic Gumby haircut is attributed to a distracted barber who unknowingly crafts an ’80s phenomenon with one accidental swipe of clippers.

Behind the scenes, there’s still tension between the men off the heels of their tumultuous “Heart Break” Tour. And its subtleties showed during an infamous Video Soul interview with Sherry Carter. 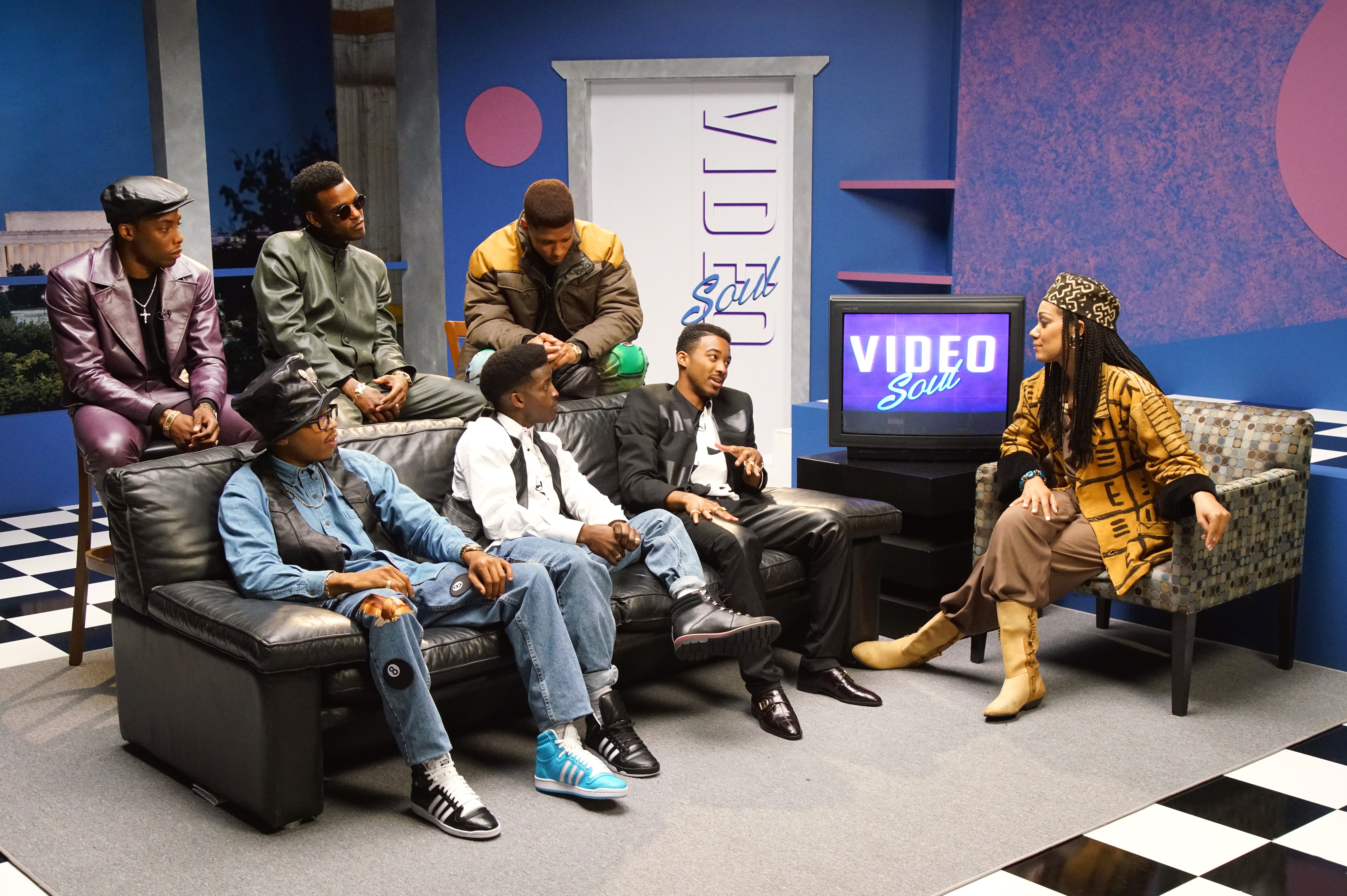 At this point, New Edition has completely disassembled into three solo acts and one group known for embracing the popular New Jack Swing genre. During this long interview, each of their current videos are shown: Johnny’s “My, My, My,” Ralph’s “Sensitivity” and the newly created Bel Biv DeVoe’s “Poison.” This is at the height of their solo careers, yet they’re goofing around, taking verbal jabs and seeming a bit insecure about their off-camera relationships—especially when asked about a fresh New Edition album.

“Soon,” is the response. But in layman’s terms, “soon” means six years.

Fast forward to 1996 and the gang is back in town for their Home Again album photoshoot—the first new New Edition album with Bobby and Johnny included. Noticeably different is how they’ve embraced the sounds of the time, working with Sean “Puffy” Combs, Jermaine Dupri and Gerald Levert for this project. The men have gotten older and their egos have gotten bigger, with each of them requesting separate buses to travel with their entourage. But Brooke (Wood Harris), who’s now their solidified manager, reveals that everyone besides Bobby and Mike are broke due to sophomore solo albums that didn’t sell.

Quite frankly, this tour and promotion is a mess. They’re flying their entire posse first class, late for rehearsals and half-assing practice when they arrive. “They were more professional then, than they are now,” says Brooke.

Bobby has four children by three different women and is legally married to Whitney Houston (who doesn’t make an appearance). Ricky is now a drug addict. They somehow make it through this one-year tour that comes to a halt when a huge fight breaks out after Bobby goes over his time and Bel Biv DeVoe takes over. A gun is shot and Brooke has a heart attack from all the chaos. Ronnie, who you’ll remember is the nephew of Brooke, has a conniption and goes off on Bobby. And just like that, the tour is over.

If we needed to know what rock bottom looks like, this is it. Already broke, the group members were sued by MCA Records for not finishing out the tour. Ronnie becomes a real estate agent. Ralph goes through a bitter divorce. Mike is now a music executive managing Boyz II Men and Another Bad Creation.

Ricky is so broke, they garnish his publishing money and he ends up overdosing. In rehab, he shares the reason for his pain: “I’m addicted to a feeling that I don’t think at this point in my life is coming back.”

Another ten years go by before the men reunite at Ronnie’s wedding to Shamari Fears (Blaque’s lead singer) in 2006. Trickling into Ronnie’s groom’s suite as he prepares to walk down the aisle, all six men are reflective of their faults and removed from their past. They apologize to one another. This scene is actually one of the more heartwarming moments of the series. “In the 30 years, I only got compensated twice,” Brooke jokingly says during the reception toasts. “But I always saw six capable boys who became men… I hope that you see the most important thing, that y’all are brothers.”

At the wedding, the real life BET executive Stephen Hill asks Brooke if all the members would be interested in performing at their 25th Anniversary Silver Concert. They oblige and the last scene is a medley of performances at the event. They even sing background for Bobby during “My Prerogative.”

All in all, it was a beautiful ending to the crazy story of six artists coming into their own. Their trials, although tragic at points, serve as a lesson for others going into the business to remain humble and grounded. And BET, along with the real members of New Edition, did a fantastic job letting us into their world.