By Joi-Marie McKenzie · Updated October 23, 2020
The very first person you hear on The Miseducation of Lauryn Hill isn’t Lauryn Hill. It’s the voice of — at the time — an eighth grade teacher named Ras Baraka. Although in post-edit, a bell was added to give the effect that a class had just begun, in reality, Baraka, who some 20 years later is now the Mayor of Newark, was actually standing inside of Hill’s South Orange living room. He had just come from coaching basketball practice. “I had two of my students with me — one of them was Phillip Valdez and the other Gabrielle Salado — and she called me,” Baraka told ESSENCE, referring to Hill, “and said she was doing something later at her house, a project, and she wanted to see if I could help.” After being introduced by author Sister Souljah, and bonding over Harlem’s infamous soul food inside of Sylvia’s, the two had become fast friends. “We all had dinner one day and that was it. Since then we’ve had a great friendship,” he added. After two decades, Baraka can’t remember what the room looked like; except for the fact that someone had rolled a chalkboard into the space, where he wrote the letters L-O-V-E in chalk. The scene is photographed on the tail end of Hill’s hit song, “Lost Ones,” which many believed she wrote about former bandmate and rumored lover Wyclef Jean. “How many people know any songs about love?” Baraka is heard asking a dozen black and brown kids, sitting inside Hill’s living room — some on couches, others in regular chairs. “I just started asking them a bunch of questions that I thought that they would understand,” the former teacher explained, noting that he used a teaching method common in American classrooms, called the socratic method. 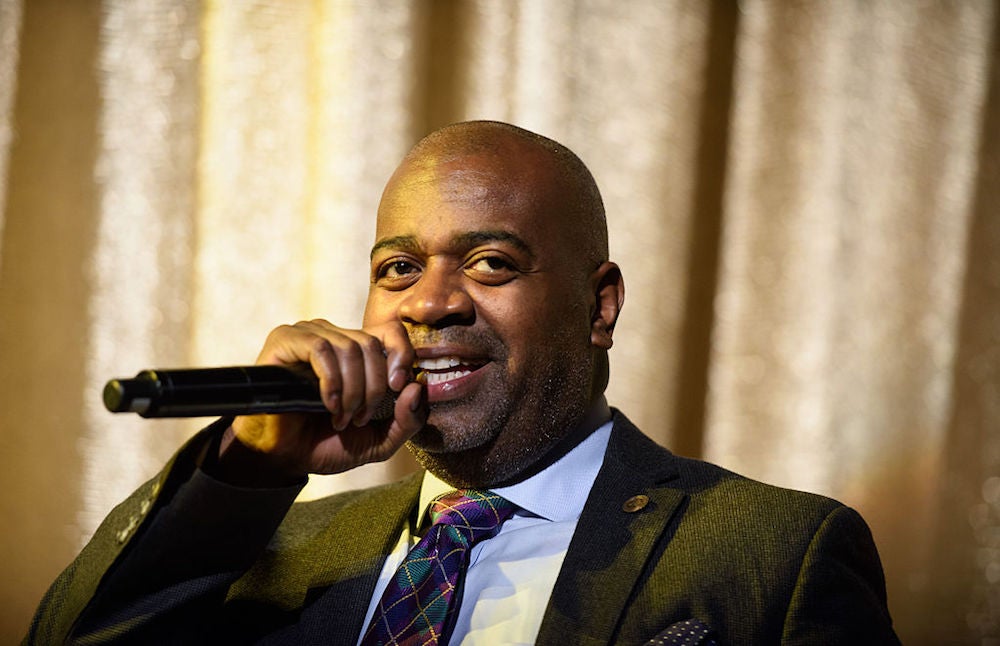 “I’m a teacher so I knew how to do that. That’s why she asked me to do it. I knew the socratic method, which is trying to get people to engage in conversation with each other. It’s done by asking a series of questions without answering them,” Baraka explained. It only took about 40 minutes for Baraka, Valdez, Salado, Jaris Boykins, Latoya Bradberry, Kevin Charles, Kennia Codwell, Tyron Lucas, Tanika Marshall, Antawn Mitchell, Alicia Simmons, Shaquan Sutton and Cory Thomas to record. They only did one take. “We didn’t do it 15 times. We did it one time and we were out of there,” Baraka boasted. “I thought those kids were pretty brilliant you know some of the stuff they  said about love was kind of adult thinking you know?” he added. Listening to the knowledge dropped by a few students at the end of “Doo Wop,” it’s easy to hear just how impressed Baraka was with these students. He even told one student loud enough for nearby boom mics to pick up, “She killed it. We can end that conversation with that, right?”

“Some of those kids were giving us whole theories about what they thought love was, what it meant, what it felt to them and I thought it was incredible,” Baraka said. But what Hill ended up creating from his socratic exercise, taking what the students said and pairing them with songs that paralleled, was a genius Baraka said he “never imagined.” “I was wondering what she was gon’ do with this,” he admitted, “but when you see the whole thing in it’s entirety — wow — that was ingenious.” It was Hill’s ability to understand that even the youngest among us have already experienced the very windy spectrum of love experiences, is what makes me confident that The Miseducation is so much more than an answer to hip hop’s misogyny. It’s about love. The ways we’re introduced to it, the way it manifests in our lives, the ways we inevitably lose it and eventually find it right there inside of ourselves.
TOPICS:  Ras Baraka