By Paula Rogo · Updated December 6, 2020
In recent weeks, the artist formerly known as Kanye West has made strides to show that he was no longer in the sunken place. But all the hope that the West we have grown to love was back all went down the drain following his rant after his guest performance on Saturday Night Live‘s season premiere this weekend. The episode was hosted by actor Adam Driver with a special appearance by Matt Damon as Supreme Court nominee Brett Kavanaugh. After cameras cut off, social media footage showed Ye, who is promoting a new album that has yet to be released, ending the show with a lengthy speech in support of President Donald Trump.
Loading the player...
“I wanna cry right now,” he sang. “Black man in America, you’re supposed to keep what you feel inside right now And the liberals bully you and tell you what you can and cannot wear, where you and they can’t not stare. And they look at me and say, ‘It’s not fair. How the hell did you get here?’” The rapper who was wearing a Make America Great Again hat then continued his thoughts with a rant. “Actually, Blacks weren’t always Democrats,” he went on. “It’s like a plan they did to take the fathers out the homes and promote welfare. Does anybody know about that? That’s the Democratic plan.” “And what this shows is we can’t be controlled by monolithic thought. You can’t always have when you have a Black subject matter like [Bill] Cosby that you have to have a Black comedian talk about it,” he continued, referencing Cosby’s recent sentencing to 3 to 10 years in prison after being convicted of sexual assault. West made the comments off-air during the SNL credits, with the show’s cast standing onstage behind him. Many shook their heads and rolled their eyes in response. 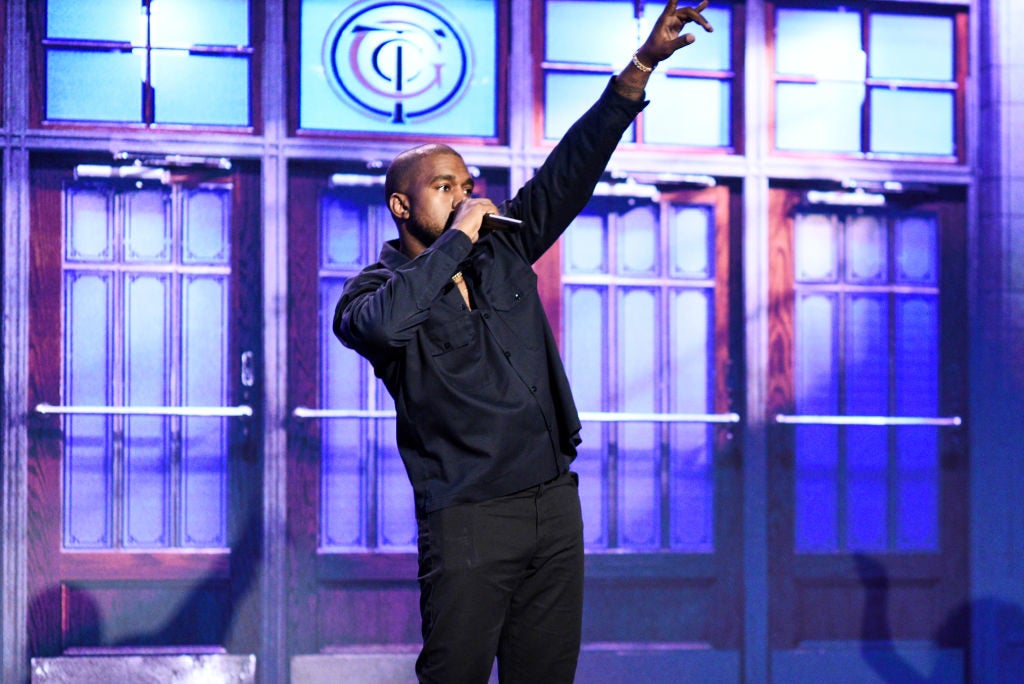 The audience was in no way here for West either; he received very few claps from them and quite a few boos. But that didn’t stop him from singing the praises of Trump. “It’s so many times that I talk to a white person about this, and they say, ‘How could you support Trump? He’s racist.’ Well if I was concerned about racism, I would have moved out of America a long time ago,” he said. “We don’t just make our decisions off of racism. I’ma break it down to you right now: If someone inspires me and I connect with them, I don’t have to believe in all their policies.” West continued his defense of Trump by claiming the president “is a builder. And when I said I’m running in 2020, all my smart friends talked so much s— about me. And when I saw that man win, I said, ‘See, I told you. I could have been there.’” When another audience member screamed, “F— Trump,” West urged him to “Try love. Try love. Try love. Try love.” He also accused the SNL production of attempting to bully him backstage for wearing his MAGA hat. “Follow your heart and stop following your mind,” he finished his rant. “That’s how we’re controlled. That how we’re programmed. If you want the world to move forward, try love.” Former SNL cast member Chris Rock filmed the entire rant on his Instagram stories, at points laughing. In one video, he can be heard saying “My God” as West talks.

As for President Trump, he shared his approval of West’s appearance on SNL Sunday morning with a tweet.

Like many, I don’t watch Saturday Night Live (even though I past hosted it) - no longer funny, no talent or charm. It is just a political ad for the Dems. Word is that Kanye West, who put on a MAGA hat after the show (despite being told “no”), was great. He’s leading the charge!

“Like many, I don’t watch Saturday Night Live (even though I past hosted it) – no longer funny, no talent or charm,” he wrote. “It is just a political ad for the Dems. Word is that Kanye West, who put on a MAGA hat after the show (despite being told “no”), was great. He’s leading the charge!”