By Joi-Marie McKenzie · Updated October 23, 2020
John David Washington said last month to put some respect on his mother, Pauletta Washington’s name, after another reporter asked about his famous dad’s influence over his acting career. Denzel Washington’s son responded by running down his mother’s receipts: “She was on Broadway working. She paid for the first date, she paid the bill, paid for the cab ride.” Now, the younger Washington is revealing just how his mother reacted to the now-viral incident. “She said, ‘Good job, but just keep it about the work though. Keep it about the work,” the 34-year-old actor told ESSENCE exclusively. “I was like, ‘Cool, mom. I got it.'” 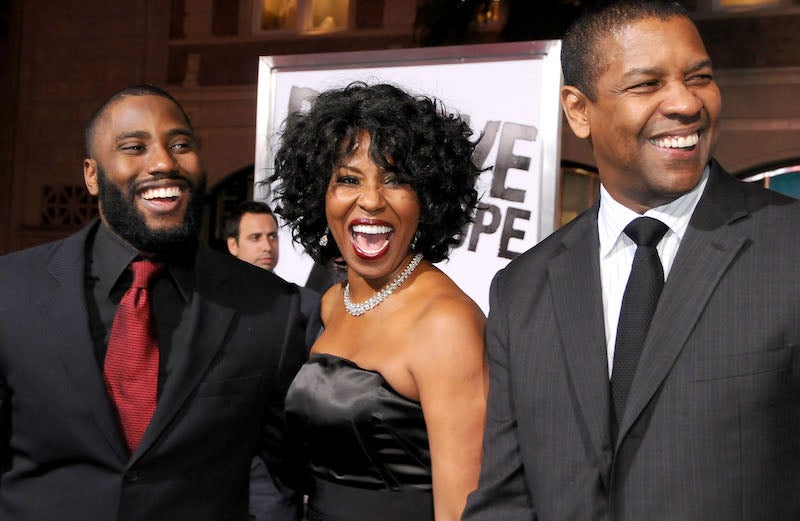 Still, the Ballers star added with a laugh, “I feel like I didn’t check him though.” Instead, Washington said he was sick of being asked the same question about his father. “Everybody asks the same Denzel questions all the time, all the time,” he explained. ” I just wanted to make it be known that my mother sacrificed a lot. She was doing a lot before we were even here for her kids, and she put her career on hold for us.” Thankfully due to both of his parents’ sacrifice and after impressing us at the box office in BlacKkKlansman, Washington is back in theaters in Monsters and Men, out today. Washington portrays Dennis Williams, an African-American police officer working at a precinct where a white colleague shoots and kills and unarmed Black man. The incident quickly went viral after Manny Ortega, played by She’s Gotta Have It star Anthony Ramos, posted a video clip online. Monsters and Men follows what happens to these two men, along with promising baseball star Zyrick (Kelvin Harrison Jr.), who was also the victim of being stopped and frisked in the neighborhood.

The actor said he “jumped at the chance” to portray a Black police officer, who’s torn between sticking by the blue or sticking up for his community. “I found myself judging him at first,” Washington admitted. “Once I got to do the ride alongs with these police officers in Brooklyn — the Brooklyn North team — it gave me a moment of pause; really a lifetime moment of pause because I didn’t consider what they have to go through, what happens emotionally to them, how much of a thankless job this is for them — especially for ones who are doing it the right way. And that’s who I advocate for.” Washington said he was so moved by the experience working with police officers in New York City that he decided to honor them through Monsters and Men. “There are some great people out there serving that get no credit. And I wanted the men and women that dedicated their lives to protecting strangers like us without any credit,  I wanted to dedicate my performance to them,” he said somberly.
TOPICS:  John David Washington