A United Kingdom, the latest film from Belle director Amma Asante, centers around the 1950’s-era interracial romance between former Botswana president Seretse Khama and his English wife, Ruth Williams. Their union threatened to tear the country apart. David Oyelowo shines bright as the embattled African leader, possibly due to his own background. In a bit of coincidental casting, Oyelowo (born in Oxford, England, to Nigerian parents) is also a descendant of African royalty who fell in love with a White English woman his wife of 18 years, actress Jessica Oyelowo.

“My grandfather was the king of a part of Nigeria called Awe,” he explains from the New York Theatre Workshop, where he played the title role in Othello until last month. “I grew up knowing I was from a royal family, and look, that doesn’t affect your self-esteem in a bad way,” Oyelowo says with a laugh.

“I know we have kings, princes and great leaders who are highly respected within African culture. I had never seen that represented on film, even though it’s pervasive on the African continent let alone in this true story. I think it’s up there with any of the greatest love stories I’ve ever seen. Those were things that made me want to see the story come to life on film.” 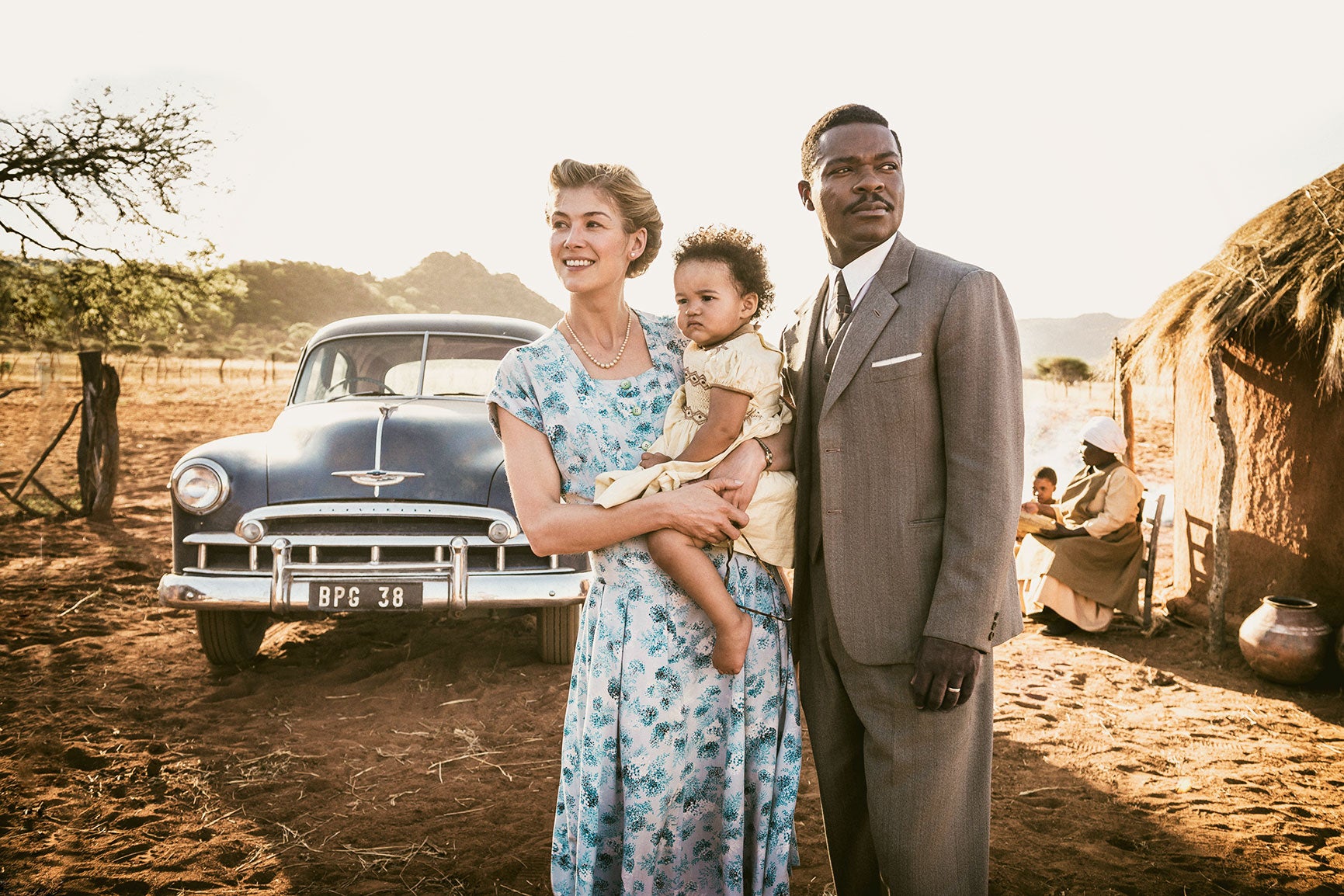 Following a celebrated starring role as the Reverend Dr. Martin Luther King, Jr., in Selma, Oyelowo filmed six movies in three years at a breakneck pace. Among them, a sci-fi thriller lensed by Nigerian-American director Julius Onah and produced by J.J. Abrams which drops later this year, along with A United Kingdom, out this month.

With such a frenetic schedule, Oyelowo says raising four kids in Los Angeles while maintaining passion in his marriage isn’t easy. “I’d be lying to you if I said it wasn’t a challenge,” he says. “For 18 years, we’ve never been apart for longer than two weeks. So even if it means going back to L.A. for half a day, which I’m literally doing next weekend, I’ll do it. Seeing and being around my family is everything to me.”

With Kingdom, Oyelowo continues a rare streak of working with filmmakers of color: Lee Daniels (The Butler), Kenny Leon (A Raisin in the Sun), Ava DuVernay (Selma), Mira Nair (Queen of Katwe) and now Julius Onah and Amma Asante. What’s more, the list includes three female directors. Oyelowo testifies that Kingdom really benefits from having a woman behind the camera.

“Those involved in the development of the film up until Amma coming along were largely White men,” he says. “Her perspective as a Black woman meant the character of Ruth gained dimension. We see how love is what drove everything Seretse did in terms of his fight against the establishment. That is an incredibly valuable perspective. Unfortunately we’re still in an era where fewer women get to direct movies than men, so she gives a fresh take.”

This feature originally appeared in the ESSENCE Feburary 2017 Issue